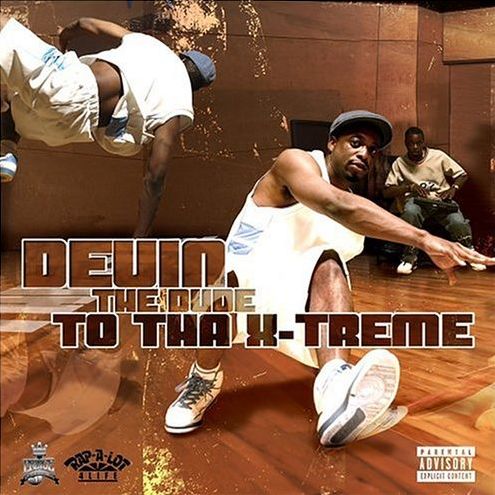 Devin the Dude :: To Tha X-Treme

I’m not the type to get baked. In fact as square as this might make me in today’s era, the only contact I’ve had with high is the contact high one gets from standing in crowded clubs and packed concerts when massive buddha heads light that shit up. I’ll never forget my first experience with the phenomenon at a De La Soul/Tribe Called Quest/Souls of Mischief concert at the Rockin’ Robin in Lincoln, NE circa ’93 or ’94 (it was my first year of college, I’m just not sure which semester). The lead rapper of a local act named Bassment Society held up a Philly Blunt about as fat as his pudgy fingers (he was a VERY large man) and said “This is for all the weed smokers in the house!” As he lit up, it seemed like everybody on my left and right all did at exactly the same time, and they all took one big puff and exhaled a long cloud of the chronic. I was already on cloud nine in anticipation of the show to come, but by the time it was over I was also half deaf from the volume and dizzy from either the effects of the herbal smoke, being packed into a hot sweaty club like sardines, or both. Intoxicating to say the least, but I still made my choice of highs as a college student the legal kind: beer and shots of hard liquor.

Nonetheless if anybody other than Cypress Hill or Rob Van Dam was going to change my mind about getting smoked up, it would be the laid back and ultra cool vibes of Devin the Dude. While he’s certainly not underexposed thanks to his cameo appearances on everything from Dr. Dre to De La Soul, he’s not exactly overexposed either. Just Tryin’ Ta Live” are not just among the best kept secrets of the South but of hip-hop as a whole. Devin combines a style that’s whimsical and charming with a polished flow, confident delivery, and a form of speech that sounds like he just smoked up a whole bag of the sticky icky icky – and not surprisingly he professes his love for buddha bless quite often. While Afroman might preach the sins of being too blunted on “Because I Got High,” Devin’s attitude seems to be “whatever dude, pass me the bong and another beer.” Little wonder then that he isCALLED Devin ‘The Dude’, cause he’s too mellow to be just plain Devin.

Mellow describes “To Tha X-Treme” pretty damn well too, an album whose title has more in kin with NORML than Vanilla Ice. Even when he’s confronted with some serious drama in his life, songs like “Right Now” show that he takes it all in stride. Produced by D-Boy and containing a well-chosen James Taylor sample, this song is guaranteed to put you in a relaxed frame of mind no matter how amped you were just seconds before hearing it. Devin takes his natural cool and pushes it right through your eardrums into your body with his fly lyrics. Is being treated like shit a hassle for Devin? Nope:

“She refused to move her purse, out the middle of the seat
Freak tried to get the Dude to curse
Wanted a nigga to rant and rave
Just because of my color, thinkin I can’t behave
I said ‘Pardon me ma’am, excuse me miss
but there’s no reason for you to be pissed
I done paid my dues, paid my bills and fees
Just wanna sit by the window here while I’m feelin the breeze”

When you exude that much charm and confidence, it’s no wonder women would be all up in your business. Few artists have been as slyly sexual in their rap as Devin, save for maybe the bassy voiced Barry White or the smooth chocolate singing of Isaac Hayes. Hold up – I know you’re confused – Devin’s a rapper and I’m talking about singers. It’s not a mistake though, because The Dude likes to get his sing on, just like his more Northern contemporary Nelly does. Devin probably raps more than the almost entirely musical St. Louis representative does, but when he croons he’s just as cool as when he raps. “Too Cute” featuring Erica Marion and produced by Coughee Brothaz Music is just such a case:

“I’m curious, but serious, tell me what kind of chances Dude
I have with you, cause really I, thought you thought you was too cute
Let’s take a walk if we can talk and smoke a Sweet girl (shut up boy)
You oughta holla at a nigga like me girl (shut up boy)
Now should I leave or stay around (I don’t know)
Well sometimes can I take you out girl (maybe so)”

There’s nothing but good times to be found on “To Tha X-Treme.” One track after another just oozes suave soul like a P-Funk album – it’s a wonder Pedro Bell doesn’t do Devin’s cover artwork. “Don’t Go” is an ode to Devin and a fly cutie getting their freak on over some fat and slow bass. “Go Fight Some Other Crime” encourages law enforcement to go bother somebody other than weed smokers. Even what could be a sad and blue track like “She’s Gone” actually comes off smooth, and you know that Devin will bounce back and find another girl who will “clean my balls when we would take a bath.” F’real, Devin’s a pimp like that, but not by being the abusive or manipulative type. He just talks good game to the women, and in his raps too. From the opening’s hilariously spliced together “Devin’s Medley” to the closer “Unity” this is one hour and eighteen minute long refreshing trip, both figuratively and literally, through Devin’s life. He may know what the rough life is, but he’s not the gangster type (although he ain’t no sucka). He’d rather have some reefer and beer and kick it with you, and if you give him a chance you’ll see that life’s too short not to enjoy it while we’re all here.