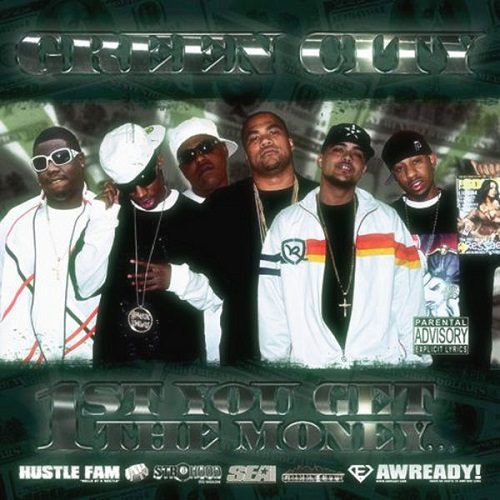 Green City :: 1st You Get the Money

Green City has been handed the opportunity of a life time with the buzz surrounding their signing to Scarface’s Underground Railroad label. It’s not often that a group gets so much exposure for merely signing a record deal. A lot of the publicity has to do with how the group got signed, a story that appeals to the hearts of aspiring rappers worldwide. Scarface was working out at his local gym when he heard Green City blaring out of someone’s boom box. Expecting the group to already have a deal, Scarface simply enquired about the group to go out and buy their album. Turns out Green City had no label and just like that Scarface had his newest group. It was the ultimate story of being at the right place at the right time, or at least their music being at the right place at the right time. The story got covered in most rap media outlets and created instant hype for the once unknown group out of Killeen, Texas. To keep the hype alive the group has released the first of what will surely be many mixtapes (given the title, they still gotta get the power and respect) before the official album drops.

Consisting of no less than six members ($park Dawg, Mike Hee, MJ, Big Spade, Yung Texxus, and J.Scott), Green City could be the southern version of the Wu-Tang but that notion is put to rest as the first song hits and Mike Hee declares on “Old Skool New Skool:”

“Jumped out the car, me and J.R.
Boys sippin’ syrup, got a gallon of the bar
Yellowbone star sittin’ at my side
Down west Texas, nigga that’s where I reside
Get high with all my friends
Jumped out the Lexus, shotgun in the Benz
Smashed on the twins, that’s how I smash
Throwaway the pussy like I throwaway the trash
Back out the Benz, back on the block
Me and J.Scott point a dot at your knot
Gimme what you got, gimme what you earn
If you ain’t heard about Mike Hee you finna learn”

There’s not much old school about the track unless you consider 2Pac’s “Ambitionz as a Ridah” old school since they jack the beat. The crew’s main emcee is $park Dawg since he’s the one who has been getting the most hype as a solo rapper but he does little to impress on the solo track “Stay Off My Dick:”

“If you ain’t a bitch then stay the fuck off of my dick man
Bitches go insane in the brain from the dick game
I’m fucking with a big dame, so back up off my tip man
I’m making bitches insane when they see the wrist bling
Which dame wanna go back into my dressing room?
Ain’t no need for questions boo cuz I’ma be undressing you
I’m testing you, trying to see how much dick your hoe can take
Give it to you long and hard, I promise you gon’ want the fame”

The rest of the mixtape maintains the same theme of money, cars and hoes as Green City sounds like the latest shit-talking street group to hit the industry. Being a mixtape they do jack beats, but it’s kept to minimum with most of the beats being synth heavy southern crunk. So the group can basically be summed up as an average lyrical group with average beats and average topic matter.

Green City’s storied ascent into rap folklore is both a gift and a curse. On the one hand, they get instant exposure and credibility, but on the other hand they have a lot to live up to. It doesn’t help that as a group they get signed by a legendary rapper who is part of one of the few legendary groups in rap, The Geto Boys. So from the jump, it’s impossible for Green City to live up to the hype. With this in mind, Green City impresses in the context of being an independent group and putting out music that can compete on the mainstream market. In the larger context, Green City looks to be the Young Jeezy of rap groups, a highly hyped entity that with the right beats is enjoyable and can sell records but in reality is just average in the rap skills department.