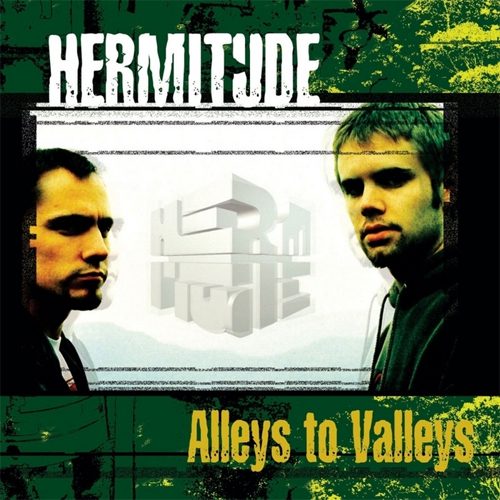 Perhaps unintentionally more profound and telling than it ever intended to be, the title of Hermitude’s 2003 instrumental offering “Alleys to Valleys” really does say it all: the Australian production duo has taken the almost exclusively urban-centered hip hop purview and molded it to their own unique vision of their own unique environment (which I’m presuming is full of more â€˜valleys’ than the average boulevard). Hell, even the album’s art is damn near the antithesis of the traditional urban experience, featuring green things like trees and plenty of open fields, with dead logs serving as chairs.

Hence, what we get here is coffee shop music supremeâ€”playful, atmospheric, mellow, jazzy, airy, groove-heavy, meandering and loose, both space age and earthy, sentimental and warm, glitchy and expansive.

The feeling here is one of open experimentation, as Hermitude lets the tracks breathe, giving the grooves they slowly build up a chance to ingratiate themselves under your skin. The only exceptions are the occasional excited rhythms, as they sneak in a few funky breakbeats and thumping basslines under the tranquil soundscapes. A handful of times the soundscape gets out of its pleasant coma and goes buckwild, which is largely effective, but sometimes just sounds like they merely sped up a slow joint for the hell of it.

Flourishes of haunted horns and vocal snippets float in and out of the mix, reminding the listener that yes, this is a hip hop album, despite such jam-band-esque structures. Also helping to remind us is the title track, the only vocals we get, where Hermitude’s label mates flow easily over their click-clack beat construction.

So, point blank: in my book, all but a few instrumental albums (R.I.P. Dilla) can avoid being all-in-all boring to a normal rap fan, and this one’s no exception. As background music on a relaxed Sunday afternoon, it’s fantastic. As promotion for Hermitude’s beat-making abilities, it’s impressive. As a complete stand-alone product, “Alleys to Valleys” just isn’t wholly satisfying. Raised in the po-mo media landscape of cartoons and commercials, our collective attention span can’t endure such open experimentation. Or maybe that’s just me. If you’re feeling adventurous and hankering for something more leftfield, you may want to hunt this one down.