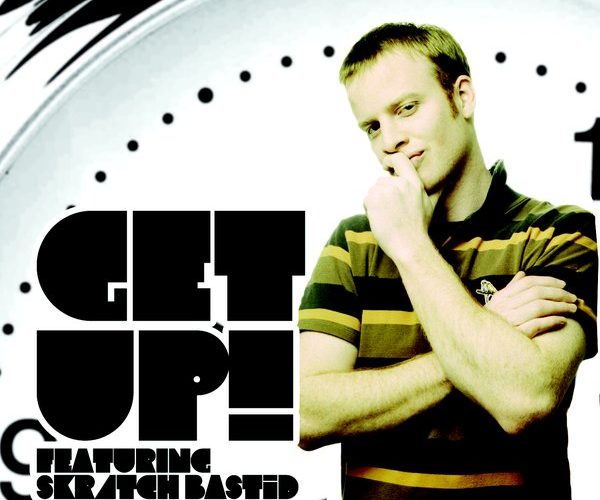 Skratch Bastid :: Get Up!

You know someone’s going to catch my attention if they can work turntables with their feet, while wearing unusual costumes. With his antics and tricks, Canadian DJ Skratch Bastid hailing from Halifax, Nova Scotia is known for his unconventional scratching techniques as well as his trained ear for mixing songs into a medley of distinct sounds. While controlling top honors in regional championships such as DMC and ITF, Skratch Bastid has also been in the limelight with his victories. Shortly after receiving second place in the international turntablism competition Skribble Jam in 2001, he was invited into the infamous 1200 Hobos Crew home to high caliber DJ’s Mr. Dibbs, DJ Signify, DJ Abilities, JEL, Buck 65, and Sixtoo. Since then, Skratch Bastid has continued to be the victor in countless battles and has only grown in skillfulness.

Aside from the battlegrounds of turntables, Skratch Bastid has broadened his horizons beyond competitions and has become involved in production with his label First Things First. Releasing mixtapes such as “Blazin'” (2003) and “Better Ask Somebody” (2004), Skratch Bastid comes back with another slamming mixtape “Get Up!”

The evolution of turntablism beginning from the days of Kool Herc has developed into a grandiose display of musical talents. The manipulation of records and instrumental breaks has created a phenomenon to span clubs across the globe and as the background sounds to emcees. However, DJ’s are no longer in the background; they are the main event. It is interesting to see that gifted deejays, such as Skratch Bastid, can mesmerize their audience through the ingenious use of vinyl and a needle.

Not only featuring tracks from today and back in the day, “Get Up!” features Skratch Bastid on his self-produced tracks including the intro title track that commences with clapping hands as you hear “get on up!” The trumpet infused track upholds the funk and soul rhythm popularly used by Skratch Bastid, while he ingeniously scratches and uses cuts to introduce himself. Creativity at its best, he attempts to bring together two entirely different genres of music to form an amalgamation of resonance. In “Pink Floyd Meets P Funk,” he mixes the best of the Parliament-Funkadelic collective with Pink Floyd’s “We Don’t Need No Education.” The highlight comes towards the end as you hear scratches from the beginning beats of “Flashlight” as it is in sync with the beat from “We Don’t Need No Education.”

In “Axel F. and Rakim,” Skratch introduces the popular synthesized instrumental theme from “Beverly Hills Cop” while slowly incorporating Eric B & Rakim’s “Juice (Know the Ledge)” and “Let the Rhythm Hit â€˜Em.” The seamless mixing from track to track is fluid and quite entertaining.

While the first half of the mix incorporates a variety of old school soul and funk tracks including S.O.S. Band and Kurtis Blow, the latter half integrates the unsurpassed tracks of hip hop. It was moving to hear some of my all time favorite tracks including Digable Planet’s “Rebirth of Slick” and Common’s “Soul by the Pound.” The mix featuring Run DMC’s “Peter Piper” and Common’s “Go” brings us back to old versus new hip hop. Showing off the talents of Common from today and back in the day puts some things into perspective: some things never change.

Unconventional mixes also include Masta Ace’s “Born to Roll” with Original Concept while the next track features “the Queen of Rare Grooves” Gwen McRae and Kenny Dope. A highlight to “Get Up!” features the out of the ordinary pairing of Amy Winehouse and Ghostface Killah in “You Know I’m No Good” which displays each of their talents.

DJ Babu once defined a DJ as “one who has the ability to improvise on a phonograph turntable and one who uses the turntable in the spirit of a musical instrument.” Skratch Bastid fits this definition in its entirety with his continuous technique and skill in “Get Up!” to keep any audience entertained. Next on the agenda while resuming his career as a DJ, Skratch Bastid is set to put his producing abilities to the test on Buck 65’s album “Situation” dropping this coming fall. What else is to come?!