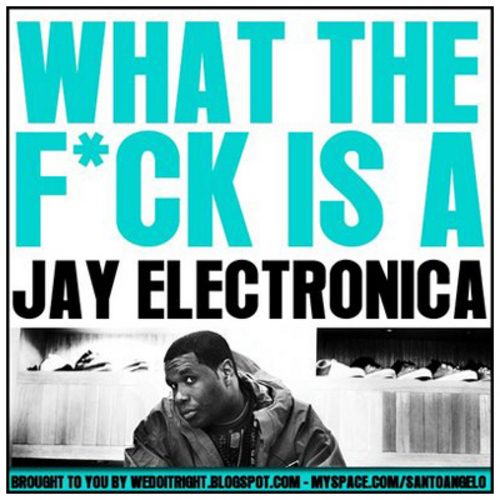 Recently, I read an article on the birth of Erykah Badu’s third child (congrats!) on the Chicago Tribune’s website. It was very briefâ€”literally seven sentencesâ€”but the fact that it was even mentioned in the publication was dope to me. The less dope part was the fact that Jay Electronica was simply mentioned as Badu’s “rapper boyfriend.” Damn.

If anyone doesn’t deserve to be relegated to “celebrity boyfriend” status, it’s Jay Elect. It would be like dismissing Frida Kahlo as just “Diego Rivera’s wife,” or saying that Jada Pinkett is only “Will Smith’s main squeeze.” However, Jay is nowhere near the iconic status that Kahlo or Pinkett have achieved in their respective roles as artist and actressâ€”but he certainly has the tools to eventually become well-known as one of the best talents in his field.

His story is almost as fascinating as his musicâ€”born and raised in New Orleans, Louisiana’s infamous Magnolia Projects, he certainly fits URB magazine’s apt description of him as a “Hip-Hop Jack Kerouac.” (Sidenote: URB featured Jay and Ms. Badu on the cover of their January ’08 issue.) He’s lived all over the mapâ€”Atlanta, Baltimore, Philly, DC, Denver, and Detroitâ€”and has worked with a litany of Hip-Hop royalty as a result.

His projects are difficult to review because he rarely drops songs collectively (Badu has said that she doesn’t know if Jay will ever drop “real albums”), and does so in sporadic fashion. But when he does leak them to the internet, it’s pure goldâ€”his voice is hypnotic, and his verses are stream-of-consciousness masterpieces. URB likened him to a young NaS, and though it may not be far-off, I’d be bold enough to say that the new NaS sounds a whole lot like Jay. The comparison is especially apparent on “Queens Get the Money,” the drumless, piano-driven intro to God Son’s most recent effort, Untitled. And guess who produced it?

That’s the other thing about Jayâ€”in addition to being a gifted lyricist, he’s a beast on the production tip. Even with cats like Mr. Porter and Just Blaze at his disposal, he’s still able to create the perfect backdrops to accompany his introspective verses. For example, look at “My World (Nas Salute),” where he reworks the piano loop from Ahmad Jamal’s “I Love Music” that Pete Rock made famous on Illmatic into a classy jazz groove over a minimalist combination of drum and hi-hat. He leaves the listener a whole lot of room to focus on his words, and when you listen to what he says, you’re glad that he does so:

“I’m back at ’em, on fire like cracked atoms
They over the +Hill+ like Wyclef and Prakazrel
I’m over the hills like UFOs at Roswell
You lame, I know you guys well
If you could name an emcee, that’s flamer than me, you high as Hell
You can’t dance with the chancellor
One glance will have you caught in the trance of the tarantula”

But the one dude who he can’t top is Dilla, whose beat tapes were utilized by Jay for a good chunk of the songs on this mixtape. Some of them have been heard before: “Renaissance Man” uses the classic guitar loop from Common’s “Love Isâ€¦”; and “Abracadabra” features the triumphant horns of “Gobstopper,” one of the highlights of Dilla’s “Donuts” album. But some of themâ€”at least the unused onesâ€”almost seem tailored for Jay. “A Prayer For Michael Vick and T.I.,” one of the mixtape’s standouts, finds Jay waxing poetic over a fat bassline and subdued strings. The name of the song is a near-misnomerâ€”instead of actively asking God to pardon the sins of these two fallen stars, he instead addresses the conditions that produced their respective thought processes when they committed their crimes:

“I never got shook up by talks of Illuminati
I’m from where niggaz talk that talk then walk
around the streets all day carrying heat like the human body
Stressâ€”we mastered that; deathâ€”we laugh at that
You niggaz sweter than the cog-ni-ac
I never sleep; and when my eyes are closed, I’m in a deep battle for sheep
I’m an insomniac
But when it comes to the rhymes, a hypochondriac; the flow so sickly
Splash a hot round on me, peel off quickly
Luckily, na’an one of you niggaz could fuck with me
I hit you with a plus degree
Mind detect mind, plus mind detect matter
With that I say peace to the G.O.’s
And all my niggaz locked away in cages, giving shit to the C.O.’s
Doing long stretches on the track cuz they fell into the trap of the Neos
The Farrakhan of rap, giving dap to the people”

That’s just a SAMPLING of what Jay provides in his writing. He excels at enlightenment, and does so brilliantly on each and every song. His versatility is another one of his strengths: he can go from the smooth game he lays down on “Hard To Get” to the hustler holding down the corner on the Al Green-sampling “Dealing.” He even engages in a lil’ bit of tough talk on “Get ‘Em,” which features both Mr. Porter behind the boards and the mic and a growling Guilty Simpson sixteen (“Got a bomb-ass gun with a landmine trigger/I’m posted at the bar where I slam my liquor/Y’all ants to me, like Grandma’s sisters”). Even Lil’ Flip turns in a nice performance on “Walk With It,” the penultimate song on the mixtape.

The final track is “When the Levees Broke,” which begins with an apt sample of Gene Wilder’s haunting song from the infamous tunnel scene of Willy Wonka and the Chocolate Factory. Jay uses this song as his moment to address the plight of those who remained in his hometown during the aftermath of Hurricane Katrina, and his monotone would almost sound disconnected if you couldn’t hear the sadness of his voice during the verses. It’s one of the best songs he’s released, and my favorite verse from him.

Of course, since this is essentially an unofficial compilation of his works, and given that it was released months before the final product of the Just Blaze-produced “Exhibit A (Transformations)” was leaked to the ‘net, there are some dope songs that are missing, including his incredible reworking of Gnarls Barkley’s “Who’s Gonna Save My Soul?” and the autobiographical “Departure.” However, this mixtape functions as a way for those unknowing Hip-Hop heads to catch up, and hopefully the next time we see headlines with his name in them it will be for his music as opposed to his personal life.