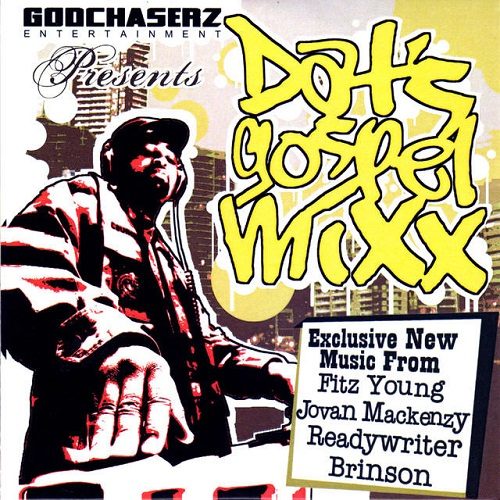 Not too long ago I reviewed a Christian Rap album by an artist named Knine. The album was entitled “Underdogg” and though it was noted that some of the substance was a bit cheesy, for the most part the album succeeded in not over-blowing the fact that it was created to promote the word of God as many discs within this subgenre tend to do. Enter Godchaserz Entertainment Presents “Dat’s Gospel Mixx”, a compilation that features Knine along with more prominent appearances from artists like; Young Fitz, Readywriter, Jovan Mackenzy, Brinson and more. The ultimate goal for an album of this nature is whether it succeeds in saving those misdirected many by incorporating the music that attracts them, but does “Dat’s Gospel Mixx” reach these heavenly heights?

Between the first couple of tracks on this mix, “Just Move” and “Get Saved”, the tone of the album is set loudly and proudly. Both cuts feature very synthetically driven beats, are up tempo and are very much endorsing the almighty–a trend which becomes extremely apparent throughout. Furthermore, “Just Move” features decent vocals from a unnamed songstress to comprise the chorus and an, at least, entertaining second verse that brings lines like, “Ya can’t make it in on the electric slide, or chicken noodle soup with a soda on the side.” Some, perhaps, with more of a direct relationship with the purpose in mind, “Like poof! no chains, like abra cadabra, no need for magic, he gonna get atcha.” Despite some of the saving graces brought to light in the early stages of the compilation, it becomes clear that the formula loses its luster along the way.

“Gospel Throwback” is a pure shame. Aside from the kind of cleverly distorted beat that plays with the words by reversing the lyrics a la Clinton Sparks on his mixtapes. The big problem with this song is that it feels like it is scolding those that do not follow the path that these emcees follow. There must be a mistake, but this is one of the lyrics from the song that will not only alienate most true rap fans, but will also piss them off: “I used to want to rhyme like Big L, but when he got popped he went straight to Hell!” Seriously!? This certainly does not express the kind of forgiveness that most forms of Christianity endear, especially considering the fact that his personal history is not well documented to prove that he was the murderous gangster that he, and a number of other rappers, claim themselves to be. The aforementioned line by Brinson all but washes away all of the so-so stuff he drops on the rest of the album. The bouncy “Bump Bump” is one of the most appealing tracks, but there is a retrospective cringe factor after hearing the blasphemy that is “Gospel Throwback”.

Though decidedly better than “Gospel Throwback”, the sentiment of the song is reiterated with Jovan Mackenzy’s, The Game-like namedropping solo joint, “Shot to Ya Soul”:

“I got a question, who makes your heartbeat?
Well I dunno, let’s ask Prodigy from Mobb Deep
He trippin’ ya’ll (why?), he dissin’ God (God?)
Making threats to Jesus Christ, that ticks me off
Ya’ll crack me up, haha with all that street music
Look at 50 Cent, G-G-G-unit
I ain’t scared to say it, man you’re pretty bold
Christ will kill your body, then kill your soul
On to Jigga man (Hova), y’know Jay-Z
Call himself Hova, Boy you ain’t god, you crazy
So when you stand before God on your judgment day
Show him all your cash, man I wonder what the judge will say
R. Kelly, makin’ gospel songs
Then do a song with Young Jeezy, you got the gospel wrong
Ya’ll headed for disaster
You serving two masters
Ya’ll don’t know the Father, so you’re spiritual bastards”

Jovan has a kind of cocky version of Evidence’s slow flow and even though he says he has the divine one on his side, he would get eaten alive by any one of the rappers he talks shady about in a rap battle. Again on the ironically titled “Christian Rap Wack?” he goes at Lil’ Wayne and Fat Joe, amongst others.

When the rappers on “Dat’s Gospel Mixx” are not talking about a list of devilish rhymers, or God, they’re trying to relate with current event topics. The most notable of these feeble attempts is “Too High”, which plays out as an overproduced interlude that has the anonymous MC anxiously spittin’ about the gas prices being in the 3 dollar per gallon range. Certainly the price of oil per barrel is preposterous, yet there is no need for this song. Other attempts to reach out cite the war in Iraq for the most part, which gain slightly better results.

Assumedly, much of the production is done by the artists themselves and as a cohesive whole the 20 tracks blend together better than most true ‘mixtapes’–a surprising feat indeed. With the tracks averaging just over 2 minutes a piece listeners are spared of too much pain on the particularly wack cuts as well. Thus, it can be determined that the artists truly put an effort into this project.

Godchaserz Entertainment Presents “Dat’s Gospel Mixx” fails in its intention of recruiting by attacking the musicians the ‘lost souls’ listen to and, in some manner, even respect. Not only that, but the word of God is so constantly forced into the ear canals of the listener that it feels like a brainwash, while much of it also seems vastly misdirected in the first place. In terms of musicianship, some artists get a little shine, whereas in reaching their goal they will need divine intervention.