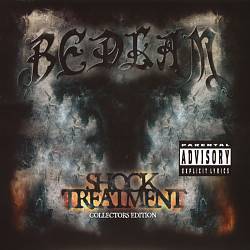 What’s with Michigan and shitty horrorcore rap? Is it something in the water? Coming out of Saginaw, the duo Bedlam sounds like a wacker version of Insane Clown Posse (although to be fair, I don’t think I’ve actually ever heard ICP, so maybe these guys are a better version of them). Like some untalented bastard child of Ozzy Osbourne and Tag Team, Bedlam boast a large arsenal of impotent, gloomy musical landscapes and tons of empty, evil machinations. The CD cover, like the project as a whole, is only scary in an unintentional way: far from being menacing, the group is frightening because it makes me uneasy to know that people are devoting their energy, money and minds to such a misguided misuse of rap. It also announces that this is the “Collectors Edition,” but with ZERO liner notes and not even one picture of the group, I shudder to imagine what the regular edition looks like (buyer beware the fraudulent claims of shameless capitalists!).

“Should I pray to God or should I dwell in hell?” This is without a doubt the philosophical question of our generation (umm, sarcasm). “Shock Treatment” reveals the fallacy of what I think is a common misconception of hell-raisers and devil-worshipâ€”they’re really just the other side of the coin from Jesus freaks; that is to say, there’s not much difference between the two groups. They’re both obsessed with archaic imagery, dogma and phantoms. The real dichotomy isn’t between heaven and hell, but enlightened secularism and hocus-pocus spirituality (whether you worship God or the devil is immaterial in my book). Not that I’d recommend “Shock Treatment” to born-agains or anything. (Except for the fact that the song “Purgitory” would make an excellent scare tactic in Sunday schoolâ€¦and for the record, I’m guessing the misspelling of purgatory isn’t intentional.)

The beats can be summed up as follows: simple, sterile, electronic and repetitive loops over weak and tinny drums and nicely-thumping basslines. The vocals fare a tad better, but the evil vocal inflections are alternately ominous and stupid. Unintentional moments of hilarity abound, as when hearing grown men chanting silly chants such as “asbestos on my balls!” over and over in sober tones (from the song appropriately titled, “Asbestos on My Balls”). Or the aforementioned chorus of “Purgitory”: “there’s no escapeâ€¦in purgatory!/ torture and hateâ€¦in purgatory!” A lot of this sounds like rejected Octagonecologyst hooks, but no, I don’t think anything here is tongue-in-cheek.

Like an alternative universe (albeit a much, much less compelling universe) version of El-P’s alienation and dejection with the modern world, this stuff might be more enticing if it wasn’t expressed with the sensibilities of a tween goth. So unless you’re a 13-year-old Marilyn Manson fan who wants to switch musical trends from juvenile metal to juvenile rap without too many thematic contradictions, stay clear!