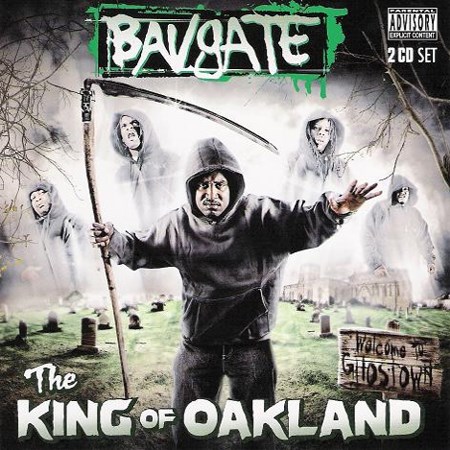 Bavgate :: The King of Oakland

Bavgate has been a victim of circumstance during all of the 10 plus years he’s been in the rap game. As part of Steady Mobbin’ on No Limit Records he put out some of the best albums No Limit ever saw but his group got overlooked and lost amongst the parade of pen and pixel jewel cases that were released every week. It didn’t help that the group was one of the last remnants of Master P’s West Coast musical roots left on the label during a time where the southern sound dominated. After leaving No Limit Bavgate ventured on his own for a few years before hooking up with the Thizz Nation distribution network. By the time Bavgate hooked up with Mac Dre’s old label, fans had already realized that the “Thizz Nation” and “Mac Dre Presents” logos were nothing more than shallow endorsements that could be easily bought by almost EVERY bay area rapper. So instead of reaping the benefits of the biggest label in the bay, Bavgate was thrown in with every other average rapper who had a few thousand to spend on an endorsement. Hurting Bavgate even more was the fact that 2006’s “Still Instagatin'” was nothing more than 2005’s “Tha Instagator” repackaged with a few different tracks and a DVD. In 2007 Bavgate is back to try to reclaim some of his fans and put his hometown back on the map with “The King of Oakland.” Gone are the corny Thizz logos that distract from other releases and the focus is clearly on Bavgate and his Black Mafia Records this time around.

“I’m a nightmare stalking, convict talking
Got the bay on my back, outlined in chalk
Kilo? No. I’m just a beast just walking
Chicken hawking, In the hood often
Leave you in a coffin, I’m not from Compton
I’m from Oakland where the murder rate smoking
We do it in the open in broad daylight
I’m tired of coming at night just to turn out your lights
I’ve been watching your act like Miami Vice
From the end of my barrel he seen the light
From the look on his face I seen the fright
Bavgate attack like two pits fight
No small guns like Harlem Nights
And when I get down niggas falling, right?
Some bustas gon’ die tonight
Cause when I get down niggas falling, right?”

Bavgate makes his point, but he gets the title as King of Oakland by default since he’s the first rapper in a LONG time to rep Oakland specifically and not just the bay. Even Too $hort stopped repping Oakland a long time ago. Miami and Mac Mall join Bav next on “Gunplay” where we get trash talking at its best. Miami handles the hook and does a good job. He’s one of many guests on the album to only handle hook duties and it’s a system that works very well for Bavgate. Fat Bastard shows up over five times to handle the hook in the spirit of guys like Big Moe and Chalie Boy. The best of these has to be “Issues” and the remix -both of which capture Bavgate at his best. The song’s bass line and guitars are clearly in the spirit of Steady Mobbin’s “If I Could Change” as are the lyrics:

Bavgate has no shortage of rapper/singers for the hook as the appropriately named Chop Da Hookman lends his vocals to three tracks including “We Gon Make It” where he claims “We gon make it if we gotta hold up every bank in America.” The guest spots do get excessive as Bavgate has to worry about promoting his own rappers (Pooh Salse, Trill Real, Fat Bastard, Chop Da Hookman) and including long-time Mac Dre affiliates (Miami, Mac Mall, Dubee, P.S.D., Ridah J. Klyde, J-Diggs). The most notable guest spot comes from Bad Azz as he helps rep to the fullest along with Pooh Salse on “Westside.”

“The King of Oakland” ain’t a perfect album, but it’s definitely one of the best albums to come out of Cali this year. The beats, courtesy of the Black Mafia in-house producers, are all on point and range from up-tempo hyphy to smoothed out gangsta funk. The only real complaints might be the excess of guest spots and the fact that at only 22 tracks deep this could have been cut down to just one disc. But when you’re charged single disc price it’s only a very small complaint. For those unfamiliar with Bavgate, don’t expect anything other than gangsta rap with occasional remorse though as Bavgate is from the streets first and foremost. With those expectations in mind, there’s few better ways to hear about “The Yay,” how “Kings of Gangstas” roll, or “Sippin on Syrup” than from Bavgate – a man who’s been at the top of the gangsta rap world before and looks to get there again.