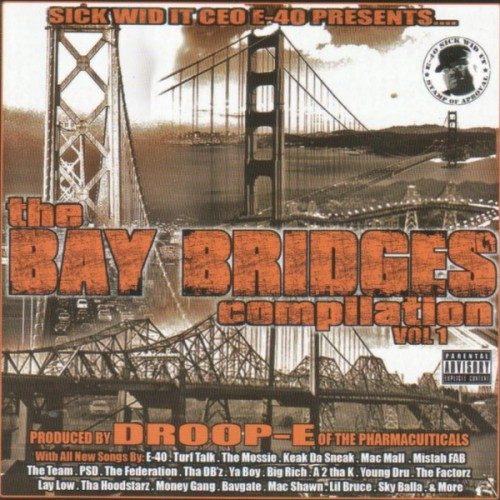 E-40, Keak Da Sneak and Mac Mall. To those who love the West coast “Yay Area” rap scene, these are the kind of artists that not only define the sound but who have been taking it from a local scene to a national movement for years. 40 has said it’s “the soil where them rappers be gettin they lingo from” and it definitely rings as truthful. Would you hear other hip-hop artists talking about getting hyphy, going dumb and showing their thizz face if it weren’t for the Bay? Probably not. At the very least it wouldn’t have the prevalance that it does today. Every time the slang gets co-opted, the Bay reinvents it. That’s either a sign of brilliance, paranoia, or both.

“The Bay Bridges Compilation” is what you would expect from the scene – all of the well-known names mentioned above, some less known artists like Turf Talk and Lil Bruce who have gotten national exposure appearing on their albums, and a lot of artists you probably wouldn’t know at all unless you were out in Oakland, Vallejo, San Francisco or San Jose. With such varied levels of recognizable talent you might think consistancy would be a problem, but Droop-E provides the beats from start to finish which helps keeps things solid.

In fact in all fairness it’s Droop-E’s production which should be this compilation’s chief selling point, which makes it no surprise that it’s promoted on the album cover in large block letters. A lot of these songs sound like they’d be perfectly comfortable on an E-40 or Mac Mall album: the bouncy swinging “Bull Shit,” the old school drums and bells of “On the Radio,” the Kanye-esque “Back in Effect” the pounding bass of “Go Ignat” and floating Lil Jon whistle of “Meet the Dealers” among others.

The downside of this compilation is for better or worse the talent on it. There are a few artists who sound like they could break out and be bigger names – Big Rich & Ya Boy, Money Gang, and the lyrically pimpish Sky Balla. Unfortunately the latter needs a better beat than he got on “Young Rich Kid,” but the talent still shines through. That’s not the case for uninteresting artists like The Factorz who spit cliched ideas like “In My Hood,” a concept that would be hard to get over even if they were more talented. They’re not – muddy diction makes the West coast slanguage harder to decipher than usual, and what does come through just isn’t that good. “In my hood, niggaz baggin up, you better back it up/Tag it up; you ain’t got cheese, go stack it up.” Really? I didn’t know I was supposed to be acquiring wealth, thanks for the good advice. Equally lackluster performances can be found from far too softspoken Team on “Smoke Wit Me” and The DB’z on “Get Busy.”

“The Bay Bridges Compilation” starts out promising, as it seems to have the right big names of the West coast, and being released on 40’s own Sic Wid It Records would seem to be his stamp of approval. In this case he might have wanted to screen it a little more closely before putting the hog on it and sending it on to the manufacturer. There’s some promise and some talent to be found here, and the well-known artists like Mall hold it down when given the chance on solo tracks like “Slobber,” but far too often they’re found sandwiched between the little knowns and unknowns on “posse all in songs” that feature nobody by featuring everybody. If you’re a hardcore fanatic of the Bay sound you may want to pick this one up, but Droop-E’s beats and E-40’s seal alone can’t make this one a must own.