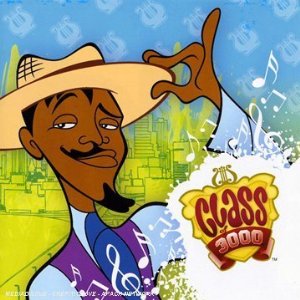 Although the saying “Jack of all trades, master of none” is readily used to describe one who is competent in many skills, but does not excel in any one, Andre Benjamin, better known as Andre 3000 to the Outkast enthusiasts is quite the opposite. Amidst his accomplishments as a musician, producer, actor, he now takes on the challenge of becoming an animated character by the name of Sunny Bridges in the new Cartoon Network series “Class of 3000.”

“Class of 3000” is a Cartoon Network show that has strayed away from traditional messages and characters by presenting an unconventional perspective on hip hop music towards the world’s youth. As the background behind the show, Andre 3000’s character, Sunny Bridges, is an accepted music artist that finds himself tired of the industry while no longer retaining the enthusiasm for music. By teaching at his alma mater, a fabricated Westley School for the Performing Arts, he relives his passion for music and learns to instill the same interest within his students. Along with the positive messages exemplified in the show, Andre 3000 introduces an assemblage of songs from Season One of the animated series that exposes children to the fundamentals of hip hop music in “Class of 3000: Music Volume One.”

Executive produced by Andre 3000, “Class of 3000: Music Volume One” features an incorporation of sound featuring jazz infused beats, lighthearted soul, funk futurism, and of course you can’t forget some “southern hospitality.” As Sunny Bridges teaches the class in the “Class of 3000 Theme Song,” the different characters in the show are revealed and uncover each of their musical talents. As the students begin playing their instruments together in a jazz ensemble, Sunny Bridges reminds them to “be yourself because no one else can do that thing like you do.”

With the incorporation of innovativeness and creativity through sound, “Class of 3000: Music Volume One” is nothing but pure entertainment aimed towards a youthful audience. Commencing trumpets begin “Throwdown” and although slightly reminiscent of the snares in Outkast’s “Bombs Over Baghdad,” the track maintains its own originality and upbeat freshness. Exemplifying some outright silliness, yet retaining the fun factor from Sunny Bridges and the students, tracks such as “Oh Peanut” that glorifies yes, the peanut and “Banana Zoo” imagines a caged gorilla’s perspective. The lesson to be learned is shown by the gorilla as he says. “Don’t tap the glass.”

Although “Class of 3000: Music Volume One” has its carefree moments, the album does not overlook issues facing the youth today and the emotions that accompany them. “We Want Your Soul” is more for the mature listener with its foreboding beat and sinister voice of Andre 3000. In the track, he poses as a corporate record label producer/grim reaper character and insists that “the price of fame is not cheap and I hope you got what it takes, but all we want is your soul.” Even with a youth inspired album, Andre 3000 reevaluates the true intentions and deception of record labels. In the slow, jazzy “A Richer Shade of Blue” with the incorporation of trumpets, piano, and bass guitar, shows that regardless if you’re rich or poor, everyone feels the blues at one time or another. With its militaristic drum patterns to initiate the track, the eco-friendly song “Fight the Blob” discusses the battle to contend with illegal waste management.

Made up of recognizable stereotypes, Sunny Bridges’ students include African-American kids, a nerdy Asian math geek, a snooty rich white boy, and a Latino principal. As they come together, it exposes diversity and being able to learn about other individuals’ ethnicities as shown in “The Crayon Song.” The track compares a crayon box to a multicultural world and its acceptance as Andre 3000 says,

With a soft piano introduction and choir singing, “Life Without Music” paints a picture of a world that does not include music and puts the whole album into perspective in this poignant track. Each student brings to light their own perception on life without music as each take a turn to comment:

“Class of 3000: Music Volume One” is more than just an album aimed towards kids. The exposure to the different elements of hip hop, jazz, and funk in a modern setting through the use of fun and creative tracks such as these is an ingenious way to aid in the appreciation of music for our youth. Although many say hip hop is dying, this is one prime example of how music educates and eternally lives on. It is an unquestionable indulgence for those young and old.