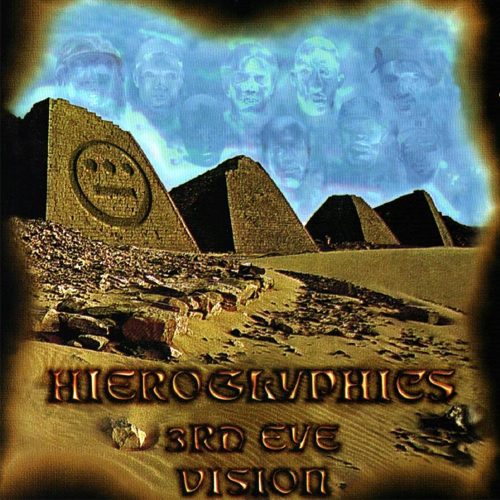 When most fair weather hip-hop fans think of the West Coast rap scene, names such as Dr. Dre, Snoop Dogg, Tupac, and Ice Cube are among the first that come to mind. In the late 80s and early 90s, these artists laid the foundation for an emerging “gangsta rap” scene coming out of California, which is carried on today by artists such as Game. What fewer casual hip-hop listeners realize, though, is that beneath all the talk of drugs, guns, and gangs in West Coast rap, there exists a strong alternative hip-hop scene that has produced classics such as The Pharcyde’s “Bizarre Ride II” and Souls of Mischief’s “93 ’til Infinity.” As my taste in hop-hip has changed over the years, I have found myself increasingly gravitating toward this underground alternative community, and as I quested for more in order to satisfy my appetite, I struck gold when I came across Hieroglyphics. Founded in the early 90s by Del tha Funkee Homosapien, Hieroglyphics is an Oakland-based hip-hop supergroup featuring Del, the four members of Souls of Mischief, and several other local artists including Casual, Pep Love, and Domino. I was surprised to find that, despite covering every other Hieroglyphics album, RapReviews left their debut album untouched, and I set out to pick apart “3rd Eye Vision.”

A hip-hop supergroup doesn’t just form overnight; rather, the artists have to prove over time that they can vibe together, both in the booth and on the mic. Take a look at early Del and Souls of Mischief albums, and you’ll find members of Hieroglyphics all over the credits. Thus, while the group officially released its first album in 1998, it is clear that the collaborative efforts of the previous years allowed them to make a seamless transition into a supergroup. With eight different producers, it might seem as if “3rd Eye Vision” would fall prey to a jumbled and inconsistent production style, with each artist trying to grab some of the limelight, but in fact the opposite is true. By sticking to a consistent sound throughout, the members of Hieroglyphics clearly recognize the recipe that works best for the group as a whole: lay down a funky bassline, lace the track with old-school drums, and throw in jazz and funk samples, which give the album a feel that is reminiscent of “93 ’til Inifinty.”

If there was any doubt of the group’s ability to mesh, it is immediately put to rest after the first song, “You Never Knew,” which features seven verses from six different emcees. With a steady drum loop and soft trumpet and piano samples, the track epitomizes the jazzy and spacy vibes of the album, and A-Plus kicks off the first verse with “It’s not a wrong thing/to be addicted to the microphone like a heroin fiend.” The real star of the show, though, is Pep Love, who embodies the internal rhyming scheme adopted by many group members in his second verse, as he raps:

“Those that know not doze
And it shows
When we broke out the knock
Hos hopped out they clothes
That’s positive feedback
Yep, The Prose
I’m poised, we never pose, you’ll never know
From ’93 til infinity we’ve been inventive
Creating the bump is our only incentive
And it’s been a long time since I feel I’ve been felt
But the only thing I fear is fear itself
So you know what we gots to do
Maybe could we keep it within the crew
Like it should be
Never givin’ out
We’re livin’ out our dreams
If there’s something I can’t live without
That’s my team
You never knew…”

“3rd Eye Vision’s” impressive length, clocking in at 22 tracks, allows for a seemingly endless number of combinations of emcees and producers, giving each song a unique feel while still maintaining the overall cohesiveness of the entire album. One of the best collaborations, not surprisingly, is “Mics of the Roundtable,” which features the four members of Souls of Mischief. The eerie samples that A-Plus pulls together for the track give it an almost mythical feel, as the Souls cement their status as the noble knights of hip-hop. A-Plus, Phesto, and Tajai share the first verse, rapping:

“A man dies once, but a coward dies a thousand deaths
Man you must know how to step with no power left
Those words are words of the prophetess of the powerless
as she professed, we became incensed, set up on a quest
Totally entrenched in every flow that we dispensed
Any foe’ll be a cinch, cause we know that we been sent
By the divine, universal mother and father to rhyme
You pre-millennium MC’s are far behind
So we off to find, the holy mic it’s only right
Hieroglyphics mics of the round table can hold it tight
Keep it stable, collectin’, scriptures and secrets
Projectin’ the cohesive, beam like graviton
With the avalon, Hiero is dope ask God
And evil-doers on the mic you have done your last fraud
This ain’t no practical joke, or anti-factual hoax
But something each breath in my avioli sacs’ll promote
Opposing MC’s will be stomped in the process or taken hostage
until it is accomplished and you can’t stop us
Draw down the drawbridge, cross the moat, let’s go
Hieroglyphics adventures in the Twilight Zone”

Of course, it is impossible to overlook the presence of Del the Funkee Homosapien on “3rd Eye Vision,” and his unique voice and delivery can be found on a number of tracks. “At the Helm” features Del as the sole emcee, as he addresses the problem of culturally ignorant and socially unconscious emcees, rapping: “You say you rappin’ but you don’t know the essence/ Just hoe slap and bustin’ caps is your message.” Some of Del’s best work, though, comes on “No Nuts,” which showcases his chemistry with Pep Love as both spit a verse over heavy drums and foreboding strings and piano chords.

While the emphasis throughout the CD is generally on collaboration, each emcee also gets a self-titled track to himself, generally around 1:30 in length, to flaunt his skills. These songs offer a nice contrast to the rest of the album, which at times sees rappers switching off nearly every other line. Phesto delivers the best solo performance on his self-produced track, a hypnotic and head-bobbing beat featuring an unnerving piano sample and spacy wind chimes over a deep bassline, and his tongue-twisting lyrics shine through as he raps:

“The Hieroglyphic argonauts bombard the spot
with sandblasting, grand eloquence eloquent talented
like balance beam medalists, the seismic
Hi fidelity poltergeist in your amplifiers
Bustin’ from the top like snipers, niggas hyper
Ventilate at the sight of the arch nemesis
When Phesto D walks the premises
I leave ’em mumma-fied like Tutan-khamun
With premonitions like Hyrahnomeus, device is incisive
And still be rockin’ the mic with arthritis
And blow the sleeves off your shirt, cause you’ll need a life vest
to survive this, any anonymous character
from Bay Area 51 to Copernicus”

The bottom line is that, while the production holds itself to the same golden standard of earlier Del and Souls of Mischief albums, it is the lyrical intricacy and complexity that makes “3rd Eye Vision” such an enticing listen. The way the emcees seamlessly pass the mic back and forth and build on one another’s rhymes, each bringing his own unique style to the table, ensures that things never grow dull on the debut effort from Hieroglyphics. Taking a closer look at the lyrics themselves only reinforces the idea that Hieroglyphics embody the vision of true hip-hop, something that many artists lost sight of in the years following the genre’s golden-age of the late 80s and early 90s. Fans of the underground alternative hip-hop culture that birthed Hieroglyphics who have yet to discover “3rd Eye Vision” are sorely missing out, and anyone in general looking for an intelligent and slightly quirky release should not hesitate to pick up a copy.