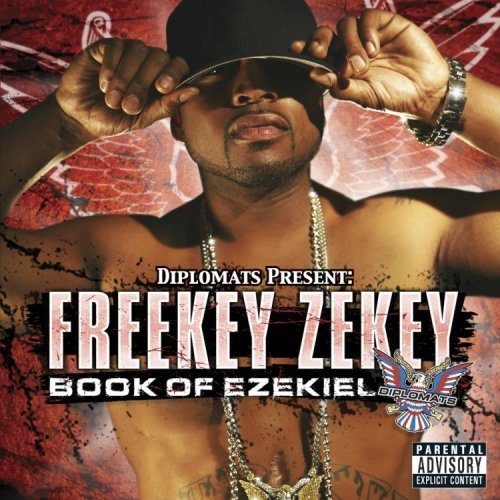 Seven years ago when the Diplomats were simply a crew listed in the liner notes to Cam’Ron’s “S.D.E.” album, Freekey Zekey (then Freaky Zeeky) could be heard at the tail end of “Why No,” rambling, “You better get some mo’ money cause we got them tapes out this bitch… You better be rich cause we got a lot mo’ shit.” Little did we know how right he was. If you have kept up with Diplomats-related releases, you will have damn near spent a fortune by now. As president of Diplomat Records, Ezekiel Jiles has been instrumental in that success, even if he had to witness part of the proliferation of the DipSet movement from behind bars. It was exactly that executive position that got him into trouble. Considering himself responsible to free the Diplomats enterprise from financial obligations, in 1999 he turned to illegal investments.

After Cam’Ron signed with Roc-A-Fella Records, where he released the platinum-selling “Come Home With Me,” the Dips motor was running seemingly smoothly. Zekey had an album in the works (tentatively titled “Stop Callin'”), scheduled for a late 2003 release. But in February 2004 the courts found him guilty of trafficking ecstasy, charges stemming from the “S.D.E.” days. As he told RapReviews.com’s Adam Bernard earlier this year, “It was basically me running the streets trying to keep Diplomat Records afloat because even though we were in videos looking good the glitter wasn’t really gold because once we were with Sony, when Cam did his two albums with Sony, Un was running Untertainment under the label we was on, he made a lot of wrong moves and put us in debt, $4.4 million, and no Key Food job, no regular Foot Locker job would have gotten us out of that. I hit the streets for a cause, it wasn’t so much to glorify the fact that being in the streets is something that you need to do and that’s the hot, hip thing, it was actually to feed my family and keep us afloat. Thanks to Dame (Dash), he saw how hard we was going and he brought us out of our debt. Unfortunately during that time I got nabbed by the police.”

Zekey had been in the news before when he suffered gunshot wounds to his chest and abdomen in April 2003 in an altercation in Manhattan, during which an associate of his was killed. DipSet wouldn’t be DipSet if they wouldn’t have recognized the incident with a mixtape (“DipSet/Byrd Gang Volume 1: All Eyes on Zeke”). On the artistic side, it wasn’t immediately clear what role Freekey Zekey would play in the ever-expanding DipSet universe. On Cam’s aforementioned Roc release he provided the hook to the popular “Hey Ma” single as well as to the track “On Fire Tonight.” Back then the Roc-A-Fella promotion referred to him as the crew’s “energetic hype man,” a notion that was supported by this publication when writer Nin Chan, looking back on “Diplomatic Immunity,” recalled the “madcap hypeman tomfoolery of Freaky Zeeky (a chubbier, blooded-out version of Flava Flav).”

Out of prison since November 2006, Zekey finally had the time to prepare his proper debut. And there’s more to “Book of Ezekiel” than meets the eye (another cover drenched in pink and a downright blasphemous title). Although the album upholds the DipSet corporate identity with guest spots from Cam, Jim, Juelz and affiliates that seem to get added by the day, with catchy sing-alongs and display of financial and firepower, Zeke has a few tricks up his sleeve. Just when you think it’s all mindless dribble, he surprises with some fairly decent songwriting efforts. “Steph” is a heartfelt apology offered to an ex-girlfriend. Singer Sen provides able vocal support, producer DA expertedly plucks the strings, while Zeke walks you through the relationship, not shying away from opening up (“Can’t tell my boys kinda love her, feel silly / Felt funny when my man was starin’ at her titties / Yo, it’s love when you wake up and you think she still pretty”). After 45 minutes of songs off the Diplomats assembly line you wouldn’t expect Freekey Zekey to recount a romance in a more detailed and sincere way than contemporary R&B ever could, but he does:

“When it comes to the cheatin’ I ain’t the best at it
DipSet name buzzin’, baggin’ hoes so effortless
One day done turned into The Exorcist
What it was she knew how to forward all my two-way messages
I messed up, here come the complainin’
Talkin’ to herself sayin’ she a fool for stayin’
Ain’t tryin’ to hear a word I’m sayin’
Now we eye to eye about to fight like we in the Vegas at the weigh-in
(…)
Said, ‘I’m ready to commit, can’t no girl love you more’
What fucked me up, she said, ‘I’m outside by the door
But don’t open up the door if you can’t give me your all
which means one day marry downtown City Hall
If not I’m leavin’, I mean it, don’t even call’
Opened so fast, the knob put a hole in the wall”

“Streets” is an at least partially regretful look back over a soulful track by Ash. The ‘streets is calling’ theme is always a good way to stir up some emotions, and Zekey succeeds with an effective chorus and contemplative lyrics: “I know everybody claim to have a hard knock life / but the difference is we move the hard rock white / Take your ass home or go hard is what I tell the youth / Livin’ proof; hunger pains hurt more than the truth.”

“My Life” is a solid, sentimental track by StreetRunner laced by Sen with cool, nonchalant crooning, as Zeke offers up an autobiographical account of the drama mentioned earlier:

“So now I’m on this music thing, a bit more pocket change
Shit bought your boy a lotta jealousy in vain
Felt the bullets rip through my vein, shit may sound insane
but motherfuckers ain’t takin’ my chain
(…)
Unlike y’all I ain’t get to stay away from drug pep talk
Knew how to stretch soft, had a mean left cross
Got money off-stage, got pounds of the x off
Now it’s farina cold toast in the mess hall
I’m aight, I be out in a minute
Niggas hatin’ on the boy cause they see the crew winnin’
Won’t touch me, niggas know I fold ’em up like new linen
(…)
My nigga, I know you listenin’
He would wanna see me hit the streets and get rich again
23-hour lock, Freek sick again
and all of this shit happenin’ while L’s got ’em whistlin'”

These down-to-earth reflections aside, “Book of Ezekiel” is strictly escapist music that is not afraid of being a little bit out there. “Holy matrimony, Batman, I done did a fuckin’ album!” the puzzled sidekick exclaims in the “Intro” before going into a Cam’Ron-style flow and ending with the promise to turn snitches into fertilizer for “where the cattle live.” Gangsterism is once again taken to absurd heights on “Book of Ezekiel,” with little regard for reality. How can you claim “Fuck the law, you never get me” when in fact they just did get you?

It all goes awfully wrong on the single “Hater What You Lookin’ At,” where producer Freebass makes a weak attempt at what probably should sound like a slowed and chopped hook. The absolutely grating chorus (further cramped by an owerpowered low end) repeats ad nauseum, “Hater what you lookin’ at, go and get some paper stacks.” And that from a crew that begs louder for attention than anyone else in the rap game. Imagine if the Dips pulled up and nobody paid them any attention. Envy is the air they breathe. Haters should get a percentage of their royalties. The Diplomats are ultra-capitalists who represent a very small fraction of the population. In their world anything comes with a price tag and a brand label. That’s why each member needs his own record label, that’s why the DipSet umbrella comprises various production companies, management firms, model agencies, clothing, cologne and alcohol brands.

Don’t understimate these Harlem hustlers. The Diplomats make no secret of the fact that they see themselves as entertainers and entrepreneurs. As such Freekey Zekey delivers what fans have come to expect from a crew that is increasingly easier to figure out. But is that enough? As an artist, Freekey blends in with the rest of the Set, but technically he doesn’t really have a strong department. He has only so much vocal charisma, so much rhyming stamina, so much lyrical wit, so much flowing ability. Whenever he follows the formula, he is a third-rate Cam’Ron in every respect. For someone who was known as the comic relief guy, Zeke also shows surprisingly little humor. His portrayal of the insecure inmate that a pesky jailmate plays mindgames with in the interludes is great, but beyond that the laughs are limited to “The cars you take care of, I get drunk, crash ’em up.” Unless you find “Call me Freekey Pampers when I come through shittin'” in any way amusing.

Considering that the Dips make music for the moment, we should have no problem imagining occasions for which tracks like the breezy “Daddy Back” or the melodic “Like This” would be the perfect background music. Topically, “Bottom Bitch” (driven by acoustic pop guitar riffs while singing the praise of that down-ass chick) and “Where the Dutch” (the album’s smoking section draped in slow funk) are theme songs that should easily find a slot in customized playlists. The gunplay is also competently conducted, on “Shoot ‘Em Up” by Spectacular and his menacing track that sounds like Pharoahe Monch’s “Simon Says” gone berserk,” and on “Killem Killem” by JA with a slowly burning beat that recalls ’90s post-sampling gangsta rap.

With the exception of “Hater What You Lookin’ At” no beat on “Book of Ezekiel” is downright bad. “Fly Fitted” is The Firemen doing a Dame Grease rendition, while Flava Beats adds a touch of class to “Livin’ it Up” with the inclusion of a flute. The inexplicably short “Crunk’d Up” by C Dub is repeat material and “730 Dip Dip” is equipped by Carmelo Torres with a slight surreal touch that would have been worthy of strenghtening, but even so it adds a grimey note to a record that is sonically on the lighter side. Sadly, the album misses the pre-release leak “Beat Without Bass” featuring Lil’ Wayne and Jha Jha.

“Book of Ezekiel” is the Diplomats’ latest test of fan loyalty. How many more soloists can the movement take? To what degree do their albums have to resemble each other, to what degree should they not? As it stands, Freekey Zekey is another Diplomat who has an album out because business sense indicates that it was his turn. Ezekiel Jiles will have a hard time convincing those who feel hip-hop is on the wrong track. To them he’ll likely be the hypeman-turned-rapper who has the scars and the jail record to prove his commercial potential. But with solid production and a comparatively stellar final quarter to make up for the filler material, “Book of Ezekiel” isn’t far off the mark set by most rap albums these days.