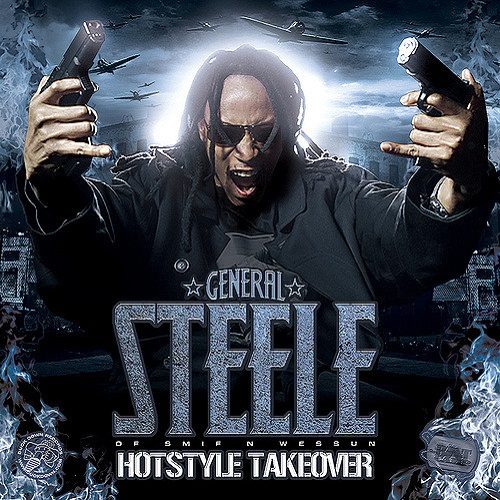 Too $hort said “get in where you fit in” and the Boot Camp Clik has followed that advice to its current success. During the bling-dominated landscape of the late 90s and early 00s BCC faded into relative obscurity, but as we find thugs dominating the radio waves BCC has slowly regained its status as the street and underground favorite. Sean Price has been the main reason BCC albums have once again become staples in both back packs and car stereos, but the rest of the camp is right there with him bringing street-hop back to New York. With his latest release, Steele of Smif-N-Wessun/Cocoa Brovaz goes solo for a mixtape full of rugged street raps and more than a few controversial verses.

As a mixtape there is little, if any, original production but Steele’s choice of beats to jack gives insight into the state of mind he had heading into the album. The first thing to note is that Steele doesn’t bother to jack any new or popular beats, instead digging back a few years. “Hotstyle Takeover” samples Jay-Z’s “Takeover” from “The Blueprint” while “Back Down” doesn’t even bother to change the title of the “Get Rich or Die Trying’ Ja Rule diss. “Hate on Haters” also takes it back as the Alchemist produced “Gangsta & A Gentleman” from Styles P’s first album is used on this one. Either Steele really dislikes the beats that are out now or just really enjoyed the albums dropped 4-5 years ago. Despite the dated and low-key choices for the beats, overall the music fits what the BCC is all about as you wouldn’t really expect them dropping bars over “Ay Bay Bay” or “Party Like A Rockstar.”

Steele invites plenty of BCC representatives but remains the star of the show. On the tone setting “Hotstyle Takeover” he lets us know what he has planned:

“I’m coming for your bosses, running up in your office
And I ain’t taking no offers, I’m coming to off you
All you see is black masks, couple niggas with torches
You’se a dead man walking, in the presence of vultures
What I’m doing for this culture is the reason I’m eating
For some reason niggas tend to take my kindness for weakness
That’s when I stop speaking, start peeping who’s scheming
Cause the streets watching, plus speaking so I’m heatseeking”

But despite a strong verse, Steele gets outshined in a major way by the other half of Heltah Skeltah:

“I don’t have to recognize y’all – LAME!
Running around in the game these days
I ain’t a hater but damn niggas is so – PLAYED!
Radio dudes be fags, they play you all day if you shoot em some cash
We went from rugged and raw to shoes and slacks
And these South niggas saying that we boostin and using they swagger
Pimp even said New Yorkers copied grills from them
Just Ice came out like 85 and he had a grill back then
It’s all love, just know your history
In 9-3 we was smile and glittery, back when a New Yorker was still the shit to be
This ain’t about the South though, peep, y’all keeping it street
We got niggas keeping it screech acting like geeks
Nigga, R-O-C with a K on the back bitch
I will not lose because I don’t play with you bastards, (Shoot One of Ya)
You be like “Why you gotta bang gats, Dunny?”
You sound gayer than Wilmur when he be like ‘Cash Money'”

Personally, I’m down with UGK and their message on “Quit Hatin’ On The South” but Rock’s verse is not a response as much as a concession that maybe East Coast rappers haven’t been bringing it quite street enough in the last few years. Controversy aside, the rest of the mixtape is filled with short one to two minute verses and songs that would probably be appreciated the most by fans of Steele. Tracks like “Jack Mover,” “M.I.B.,” and “Cold Blooded” don’t tread any new water and present street themes done with little to no originality. Occasionally, Steele flips the script enough either musically or lyrically to warrant added attention. “Down 4 My Niggas” has a funky and original beat though it could get annoying to some. “Everything I Love” also finds Steele coming particularly strong on the verse, though the recycled beat also plays a big part in the success of the track.

Overall, “Hotstyle Takeover” is everything but a takeover. Steele has some style and wit in his verses, but his charisma is nothing compared to label mates Sean Price and even Rock. Paired with Tek and with tight original beats Steele is definitely above average, but riding other beats, classic beats at that, many times he fails to match let alone exceed the original. Of course, being a mixtape it’s expected that Steele hold back a bit and there’s enough freshness to keep heads looking forward for Smif-N-Wessun’s “The Album” coming later this year.