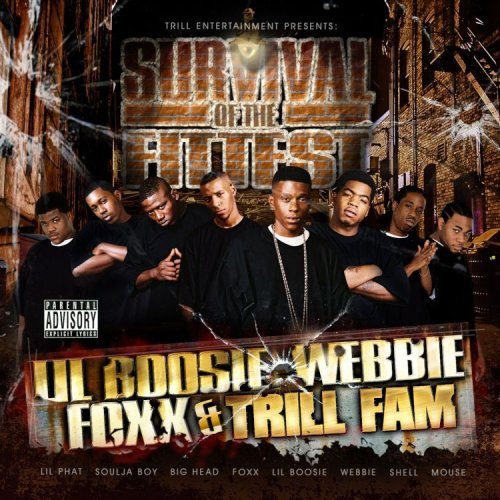 Oversaturation. That’s the first word that comes to mind when looking at a new album from Lil Boosie and Webbie called “Survival of the Fittest.” Oversaturation is what happens when a sponge can’t absorb any more water – instead of soaking up more liquid it runs over it and around it, never penetrating the pores. I’m feeling that hip-hop is oversaturated right now in a major way, and it’s little surprise that RapReviews.com averages 10-12 reviews per week when it’s a SLOW time in the industry. Now that Memorial Day has come and gone and the summer is all but officially underway, the deluge of new albums will come non-stop. It’s not just that I can’t absorb a new album from either Boosie or Webbie with so much to listen to; to be perfectly honest I DON’T WANT TO. Neither Pedro ‘DJ Complejo’ Hernandez or I had anything overwhelmingly positive to say about their solo albums – I gave Boosie’s “Bad Azz” 4.5 out of 10 and P gave Webbie’s “Savage Life” straight 4’s across the board. Can the two together really be any greater than the sum of their parts?

Thankfully things at least start off on the right note with “Say Round.” Boosie & Webbie call on their producer of choice Mouse for this opener and he proves himself worthy with a dark and ominous combination of plucked harp strings and pounding beats. While neither one has or will win any awards for their written content, they achieve some level of competency by pairing with relative unknowns Big Head and Foxx for a song oozing with paranoia about being observed including the chorus “Say round, let me hit you right back/hidin right now, feds got my phone tapped” punctuated with the cell phone tag line “CAN YOU HEAR ME NOW” in a voice reminiscent of Juvenile. Every now and then a phone’s ring tone chirps in the background and instead of being irritating it adds to the chilling nature of the narrative about “every hood [with] snitches, bumpin gums like bitches, so they won’t have to live behind fences.” Although this track is probably much too dark to be a hit single, it would certainly make for one hell of a cinematic music video.

Unfortunately the momentum from the opening track doesn’t last as the album devolves from a Boosie & Webbie release into a compilation of Southern rappers signed to the Trill Entertainment label looking for their time in the spotlight. 3 Deep perform the monotonous “Do It Stick It” which reiterates and reverses the title in the chorus until the point you want to regurgitate. Big Head fares a little better on “Politician Networkin” but largely owes the success of his track to Mouse, who clangs church bells and staggers staccato beats in a way that makes you think the instrumental is from an unreleased 2Pac “Makaveli” track. Mouse comes through again on “Same Old Shit,” saving a song with a cliched name and tired concept from the hip-hop dustbin with a pounding bassline, floating melody and background singers crooning “ahhhh ahhhhhhhh, OOOOOOOHHHH.” Mouse is not the only one to turn in a star performance on production though. Bruce Rome rocks it out for the Webbie and Boosie duet “Swangin” with a track that sounds tailor-made for U.G.K. and a pocket full o’ them stones. His “Bout Dat” track for Webbie and Foxx is simple but effective, punctuated with enough thump to have screens falling in your whip. Rome’s best magic is on Boosie’s solo track “Thug Me Like That,” a shockingly smooth throwback to the Scarface albums of the 1990’s.

“Now I promised not to beat the pussy, yeah right
I promised you to show you some respect, yeah right
I guess I live the life of a superstar, drivin all these fancy cars
And real talk, man I can have any broad
Plus I, hate to see you cryin, I hate to tell you lies
That’s why deep inside she like – ‘Lil Boosie
Why you thug me like that?’ It’s just in me”

“Survival of the Fittest” is a mixed bag that at times exceeds expectations and at other times can barely surpass them. Despite their best efforts Webbie and Boosie still border on mediocre thuggery in their rhymes, offering neither exciting narratives or innovative flow concepts that elevate the hip-hop artform. At the same time it’s often easy to overlook their deficiencies thanks to the album being loaded up with strong effective beats and help from their labelmates on the lyrics tip. In a summer that’s going to be heavily crowded with must-have albums from both new artists and established veterans “Survival of the Fittest” should not be at the top of your list, but you might at least want to borrow it from a friend who does cop it for a listen and pick a few tracks worthy of repeat play to grab off iTunes.