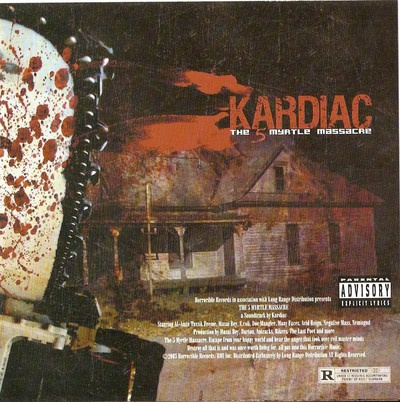 There’s not a whole lot to say about Horrorcore rap. ‘Torture rap’ is how Kardiac classifies his genre of music. Sometimes it works and sometimes it doesn’t, based strongly on the mood and grim atmosphere set by the artist. “The 5 Myrtle Massacre” certainly has a title that would make one think that this is going to be on some hardcore storytelling ish, but does this Longshot Record really make the cut?

“Ted Bundy’s Favorite Radio Station” will certainly have the conservatives shaking their head in disgust before even giving it a listen, but I think that goes without saying and I imagine that they would realize the direction of this CD before getting to this, track #3. Trouble is, it’s hard to imagine that even the big fans of this dark form of rap can really get into the shuffling, muted beat that features stiff metal rock guitar riffs. The first problem is that the track never really references the serial killer that it is named after and the chorus is purely non-sense:

“Hold my breath with her
Easy sex giver
Put my name on the list now
6 years, get a fresh liver
I’m all for settling down with a Natural Ice
Cuz a dollar and change buys a new wife”

As you can tell by dissecting the structure and lyrics, there is not much substance here. It is just random sickness and weirdness just for the sake of it. The disc continues down this tired, played-out path.

“Sharing Needles” seems to bring some kind of ray of hope. Not only is the title a great name for a vicious track, but it starts off with an ominous voice stating, “Did I ever tell you about the first time I did heroin?”. The calmer, hypnotic beat seems to keep Kardiac from getting too sloppy with his voice and breath control which is often a problem on the ‘more intense’ tracks. He sounds like Agallah, or Bizarre from D-12, but he fails to enunciate his words that really distracts from what he is trying to say. The story unfolds as a childhood version of Kardiac splits hairs about a girl that he used to hang with that took it too far. The conceptual attempt is appreciated and it varies the disc for the listener, however, when the chorus kicks in which is a sample of Kansas’ “Dust In The Wind” it all turns a bit too cheesy. Yes, the same song Will Ferrell sings at Blue’s funeral in the contemporary classic movie, “Old School”. The song is a rock n’ roll classic but it was even hard to take the overdramatic lyrics serious back when Kansas was on tour, sporting the eye patch.

The album is littered with featured artists and it acts as a platform for others on the label to get some shine, or rather embarrass themselves in many cases. It is hard to have faith in a musician that goes by the name E.Coli from the group Filthography. Members of the Alcoholic Monsterz are often finding themselves behind the mic with forgettable results. It’s not all bad though, Negative Mass comes through with a formidable verse at the beginning of one of the stronger Immortal Technique-sounding tracks in “Contraband”, but he runs the risk of alienating a rap base by spitting, “I wasn’t really into Biggie and Pac, but they was hip-hop as well, anyone can get shot…” One would think that an unknown rapper would cherish those that paved his path, but the sentiment does not seem to be very strong. It’s doubtful that much of this music really appeals to the same fan base anyways.

Another fairly nice beat, thanks to some more creative uses of brass instrumentals, on the cut “Pigs of New York” is ruined by over-the-top lyrics like “I guess losing my respect is not a big loss, as is your pussy smells like CHAFED BALLS!” and “let me puke on your box, before I PUSH IT!” Kardiac actually extends the ends of his lines in order for them to fit into the timing of the bars instead of writing the bars equally.

One thing that is done well on the album are the choices of excerpts that usually open and close the tracks. For instance, “Nice Person” closes with the famous lines that conclude the film “Usual Suspects” uttered by Verbal Kint (Kevin Spacey). If only the songs could match the ingenious moments taken from the source material.

Several problems persist throughout the 16 track manifesto “The 5 Myrtle Massacre” from Kardiac’s imprecise vocals to his writing faults . Kardiac has difficulties in finding the balance that artists like Brotha Lynch Hung have mastered. Ultimately, this album is just another from the constant material pumping Longshot Records label that will not fulfill the thirst of even big Horrorcore rap fans. In fact, I just assume the disc be buried 6 feet under ground.