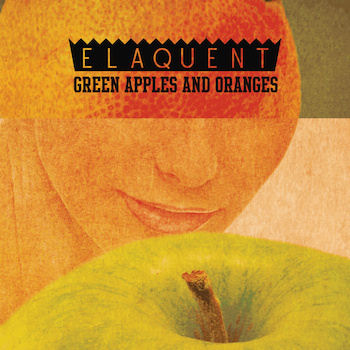 Elaquent is a residentURBNET producer hailing from Guelph, Ontario, Canada. He’s been slowly bubbling up from the underground for a while now – and much like a bottle of champagne he’s just been waiting for someone to pop the cork and let out the goodness. His bio pours on more superlatives than this reviewer could though – calling him everything from “vibrant” and “ahead of the curve” to “infectious” and “catchy.” That’s bad if you’re H1N1, but that’s pretty damn good if you’re making beats. Hyperbole and superlatives mean nothing though if you don’t back it up when it’s crunch time.

I’m happy to report that Elaquent lives up to his hype – and in fact it may if anything be understated. It’s too early in his young career and there’s too little available material to gauge if he’s going to be a flash in the pan or sustain at his current level, but “Green Apples and Oranges” suggests he’s more than just your typical laptop producer with a free album on Bandcamp. “Aurora” is a revelation. Much like an aurora borealis is a ribbon of light in the sky, “Aurora” is a shimmering and beautiful instrumental, with only the faintest hints of the featured artist Esta breaking up the enchantment. That’s typical of Elaquent’s style. If “Alone at Last” is a soliloquy to privacy, lock me in a room with this track – it definitely speaks to me. Aside from the occasional “come on y’all, get live get down” from Common (Sense), it’s just you and Elaquent.

Elaquent doesn’t tend to complicate things with emcees rapping over his beats. That would be a problem for most up-and-coming producers – after all you get known by getting people to flow on your shit, then other people want you to make them a hit. El seems blissfully unconcerned about this. “Almost There” features Budamunk, but he’s not to be confused with Buddha Monk – he’s a fellow producer sharing the music and vibes. You’re not going to hear anything from Elaquent other than his unadulterated musical statement – so when he offers you “Closure” on the final track it’s fitting. I regret that instrumental-only albums aren’t more marketable in the egocentric rap world, but as a representation of the limitless potential of hip-hop production, this ranks high.