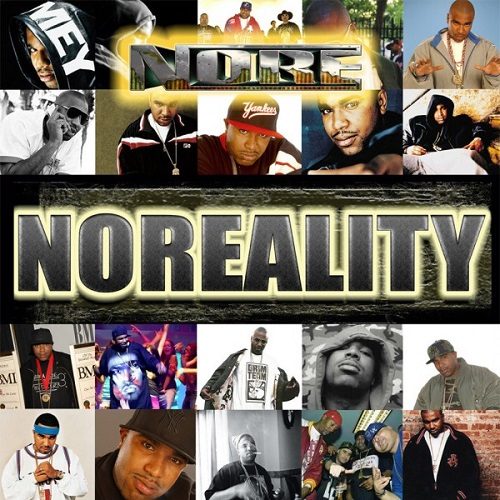 Victor ‘Noreaga’ Santiago is the kind of hip-hop artist who could never come from a cookie cutter recording industry formula. He’s not going to fit into any narrow definition of rap music – he’s a reggaeton rapper, a hispanic hip-hopper, a superthug and a suave club pimp. You can name any of about 20 reasons that all of those things should not exist together in the same place at the same time. If that’s not enough there are any number of people who would be happy to point out he was the weak link in Capone-N-Noreaga, popularly known as CNN. Capone has had a slew of legal problems which has left Noreaga on his own for most of career, which resulted in him adopting a whole series of other psuedonyms ranging from Melvin Flynt Da Hustler to N.O.R.E. – the latter of which stuck. “Stuck” is often an apt word for Noreaga’s rap style, as he has a tendency to repeat himself while rapping and stay stuck on rapping nonsensical sounding shit. There are times you could find more depth in a Dixie Cup full of water than in one of his rap songs. One of his most successful singles was built entirely around a chorus where he shouted the word “WHAT” a lot. He even named his crew Thugged Out Militainment by combining the words military and entertainment. Wrong, wrong, wrong. And yet everything that’s wrong about N.O.R.E. works when put together. You combine his awkward rap flow, lack of depth, deep vocal tones with some great beats and suddenly you have a hit on your hands like the first single off “Noreality” entitled “Set It Off”:

“Aiyyo ridin with my burner, rollin with my earner
L.I.E. expressway, bangin out cool murder
BULLET BULLET, I rep New York to the FULLEST FULLEST
I got guns, don’t think I won’t PULL IT PULL IT
Cat off safety, dudes won’t face me
Both of them hoes, like, Cagney & Lacey
And N.O.R.E. (YEAH) I’m respected in the projects
Filled out my O.G. card, it’s in the process”

The lyrics are completely absurd, but since advocates partying it up with “the Patron, Hennessy cranberry and vodka” while “mami [is] down for taking on poppa” the Swizz Beatz produced song is a hit in dance AND strip clubs everywhere. I had some personal experience with the latter just this weekend and girls definitely love to shake their booty to this bad boy. I imagine the same will be true of the aptly named “That Club Shit” that immediately follows it. It’s yet another in a long list of Noreaga songs that SHOULDN’T work yet somehow get your groove on. The track opens N.O.R.E. and some unnamed girl humming the Oz & Deacon beat track with their mouths closed – “hmmm-hmm, hmm, hm-hmmm-hmm-hmm.” It is LITERALLY ABSURD. The chorus isn’t any better – Noreaga raps the words “your mind work funny” and might as well be talking about himself, although he could just as easily be referring to the Three 6 Mafia members who join him on the song. At one point in the first verse he rhymes blue, you, crew, you, and finishes with how rappin’ instead of yappin’ is what you ‘POSED TO DO. Then he starts badly singing his own version of “Lean On Me” as an ode to people who are too drunk off Patron to stand up. WRONG, WRONG, WRONG. And yet this too will be a monster hit.

The one thing that simply can’t be pinned down about Noreaga is his charisma. He’s like a wrestler who you know is terrible – his moves look bad and you’re afraid everytime he locks up with an opponent he might accidentally hurt them due to his own clumsiness. Nevertheless even though you full well know he’s terrible, he gets on the mic after the match and cuts a promo running down why he’s the greatest thing since sliced bread and finishes with a clever catchphrase. Suddenly that terrible wrestler is the greatest thing ever, and you can’t wait to see him again – always hoping the next time he’ll do better than the last time. I’ve long since given up on Noreaga becoming a better rapper, and apparently he has too on “Noreality,” since N.O.R.E. relies on a long list of guest artists to help him carry the weight. Jadakiss and Kurupt throw down on the Tony Heath produced “Throw ‘Em Under the Bus.” Boola hooks up the horns on the boards and invites N.O.R.E. to throw down with Kanye West and GLC on “I’ma Get You.” Grease handles the two step of “Sour Diesel” featuring Styles P while Algado brings it heavy for a guest appearance by former partner-in-rhyme Capone on “Green Light.”

The bottom line on “Noreality” is that this is another in a long list of Noreaga albums from “N.O.R.E.” to “Y La Familia… Ya Tu Sabe” that work even though they shouldn’t. Even though N.O.R.E. is the kind of rapper who rhymes “street eBay” with “just call me Nor-Bay” there’s that intangible element of charisma that he has that allows you to overcome his major flaws for at least a little while. Unfortunately this doesn’t hold weight for an entire album, even one that’s only 13 songs long like “Noreality,” but like every other N.O.R.E. album this one will produce a couple more can’t miss club hits.