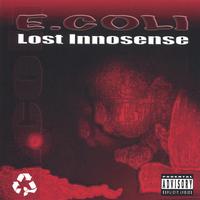 The E. Coli bacterium likes to lounge in the gut flora of mammals, also known as the lower intestines area. A middle-aged man with a healthy appetite will drop a toilet bomb containing one trillion gazillion E. Coli bacteria on a daily basis. E. Coli is also the catalyst for a host of nasty diseases, including bloody diarrhea and urinary infections. America had a recent run-in with this unwelcome guest in 1999 when hundreds unsuspecting citizens ate fresh field spinach sprayed with shit-drenched cattle water. E. Coli is rarely deadly, but only endured when it stays put on the edge of the toilet seat.

MC E-Coli resides in smokey, damp rooms filled with coke-smeared mirrors and wasted bottom-feeders, somewhere in Middletown. This community in the bowels of the state New York is the same place where Chris Palko spent most of his abysmal childhood. As he states in his biography on the Definitive Jux website, he was sent to “rap college” when he left Middletown for a forced stay in Stoney lodge Psychiatric Hospital after his mother convinced the judge her derelict son had no place in society. Palko came clean on his abusive, drug-infested youth with his autobiographical debut “Hells Winter” on the Defintive Jux label, but before this he spearheaded a school of rapping known for its nightmare imagery, suicidal tendency talk, and gore galore.

Cage decided to give up on the character, but he isn’t the only MC who aims for the abdomen while rhyming. “Lost Innosense” is E-Coli’s third full album after releasing several twelve inches and EP’s on the Stolen Music Imprint label, which he rather refers to as his musical family. They release music under nonce formations as Creepazoids, Pill Party Professionals, or Filthography. Their best known member is Masai Bey, an MC and producer who teamed up with the aforementioned Cage and did some work on a Def Jux compilation album.

Masai Bey’s lesser known label nephew used to be an amateur boxer, but became a cocaine adept after he tossed his gloves at the suits sitting on the ringside seats. He tells about his new found love by breathlessly pouring syllables over the drama strings of “Rehab Discharge”:

“I’ve had it. I’m an addict
The first step is admitting it, and I don’t give a shit
Who knows I abuse it
Put myself through a self-detox to make sure my sperm was good
Before my seed dropped
I love the girl, pop
Name it, crush it, swallow, fuck it: let’s do it
Tell the sober to move over
I get flattened by an aspirin
I ain’t out yet. Not because of my habits
But I don’t feel like shopping”

Besides his love for drug abuse, E-Coli is about lyrically pioneering the few taboos mankind still clings to. Constant recursions to fecal matter and other bodily fluids people complex their babies into finding yucky swamp “Lost Innosense.” With lines like “Get your toilet paper ready for my pieces of shit around the world” on “Baby Showers” or the MC imitating the sound of snot flicked on top of lyrical competition on “Deviated Ceptims,” he wants to prove the infectious nature of his “bacteria raps pioneer” moniker.

The shock therapy of his flow backfires because of his inimitable use of metaphors and storylines. “Freedom VS Prison,” which possibly is autobiographical, tells about an ordinary Joe whose girl kisses another on the mouth on Christmas day. He decides to off the pregnant adulteress, but E-Coli loses me after he mentions “throwing trash on her maternity clothes” and then goes on about butchering the whole of humanity. The delirious drug rant on “GummyBearzOnMerryGoRounds” over a twisted fun park beat or the mind-boggling analogy of a colossal superhero not fitting into society on “260.000 lb man” aggravate the confusion.

Just as E-Coli’s voice at times lashes out under his breath with maniacal growls, the production on “Lost Innosense” is filled with sudden beeps and bleeps. The added distorted bass and shattered guitar chords make for a dismal atmosphere, like an abandoned space station whose former inhabitants left the emergency systems going. When the jittery drum patters of the bulk of the tracks take a breather, E-Coli and his Stolen Imprint peers sound more convincing and haunting. Masai Bey shows how it’s done on “Skeptic Tank” by dropping both the best beat and the tighest lines on the album:

“Caution take has a paramagnetic base
So the warning is most important, I’m showing you safety in saving your face
Nothing fancy and no I’m gonna mention
You suckers are so damn fresh at pretending
I dedicated more than half of my life
Schooling boys like you glow like a cheap alloy
But there always approaches an age when one must motion home to inevitable dust”

Cage appealed to more than just a handful bloodthirsty indie rap fans by showing mic prowess and dark charisma. No matter how warped his lines got, he always threw in a witty punchline to counterbalance the darkness. The Stolen Music family’s motto is summed up by its pack leader Masai Bey: “I don’t rap for fun.” That attitude is held up high by this self-proclaimed rap infestation, but he needs some more mutations to get him out the bowels of New York into the deadly virus category.