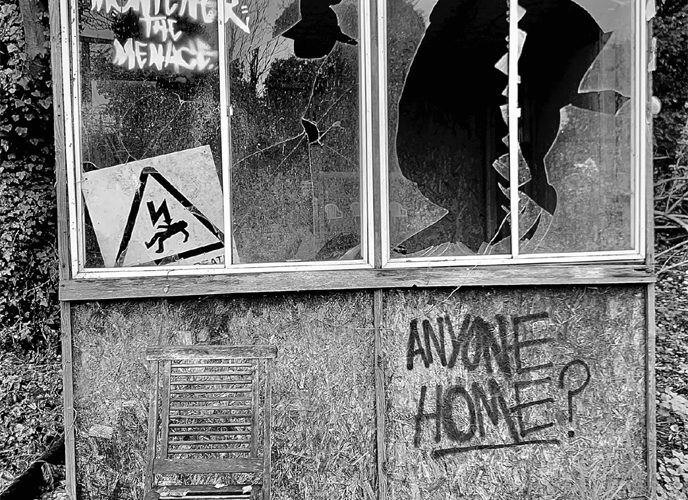 Montener the Menace :: Anyone Home?

English emcee Montener the Menace released his debut album, “I Have a Hidden Hobby”, a year ago. While the album was steeped in a traditional hip-hop sound, it was actually from the literal past. Despite being released in 2020, the album was completed in 2008. In many ways, that age gap almost made it feel like a concept album where the plot took place 12 years prior. Much has changed since that time, including Montener both musically and personally, and it shows in “Anyone Home?”, his 14-track sophomore album. This time around, Montener is significantly less reliant on guest appearances, has different subject matter, and more varied producers whereas his debut had almost every other track being produced by either Iron Fist Productions or Domingo (who does both the “Intro” and “Outro” on this album, as he did with Montener’s debut). Though the hidden hobby indicated on his debut remained concealed for over a decade, “Anyone Home?” is Montener adapting said hobby within modern times.

While Domingo laced the beats for the album’s start and finish, it’s the cuts and record scratches by DJ JabbaThaKut (he does all the album’s cuts) that give them their charm, making the album’s instrumentals, including the Lax the Monk-produced “Anyone Home?” interlude in the middle of the album, reminiscent of DJ Premier. Soon after, Montener gets started by taking aim at his critical detractors on “We Need to Talk About Kevin”. Over a Jack Cliff-produced chipmunk soul sampling beat and some vocal samples from “Home Alone” (1990), Montener throws wry swipes and tongue-in-cheek darts at Kevin, a composite character of every critic who gave Montener’s debut a negative review. He gets introspective on the Hank Venture-produced “Introspection”, over which Montener’s cockney accent gives way to a certain melancholy. Though one criticism I had on his last album was that Montener sounded off-beat in certain parts, it remains here, but he’s made efforts to improve his flow.

The guest appearances on “Anyone Home?” make up half of the album, which is a considerable departure from Montener’s debut and indicative of his potential to fully carry an album in its entirety. Several of the tracks containing guests are actually posse cuts. On the strings-heavy “Take It Back”, he raps with hip-hop vets Craig G. and Ed O.G. about their inspirations in rap. J.L. Beats provides a bluesy tinge for the beat on “It’s Always Sunny In Croydon”, a satirical ode to Montener’s South London hometown with a little help from his friends back home like Boodah, Cracker Jon, The Strange Neighbour, & Jay Purpose. The one posse cut that’s garnered the most attention is the first single “High Noon”. Featuring Masta Ace, Rah Digga, Wordsworth, & Fatlip from the Pharcyde, the appropriately named Wounded Buffalo Beats laces a beat that evokes imagery of an old west saloon gun duel. Though everyone brings their A-game, Masta Ace had the best verse and dropped it early on when, to me personally, it should’ve been placed last:

The posse cuts continue on the piano-driven “The Struggle”, which features Guilty Simpson, Micall Parknsun, & El Da Sensei and is a lyrical discourse on pulling up oneself by their bootstraps and pressing on daily. It’s interesting that the following track which this leads into is titled “Dog Food”, which is about wading through a dog-eat-dog world. This track contains harder snares than previous tracks, courtesy of Plastic the Funky Mulatto, and female vocals on the hook. The animal motif in the songs is continued later on “Feed the Foxes”, a cynical meditation about being too trusting with certain people. The album’s “happy song” comes in the form of “I Can’t Resist Hearing”, produced by Keynotez. Upbeat and guitar-driven, Montener raps about his love for his children and the joys of fatherhood. His final features are on “Legends Never Die” and “Bloody Marvelous”. The latter has Keith Murray rapping braggadocio over some atmospheric piano keys, while the former samples vocals from “Halloween” (1978) and features A.G.

“Anyone Home?” is certainly a noticeable improvement over “I Have a Hidden Hobby”. While there is truth in some rappers being unable to change with the times with this long of a period in between albums, that isn’t true in Montener’s case. In hip-hop, adaptation is the key in its constantly shifting landscape. With his sophomore album, Montener proves that he’s got what it takes to avoid getting left behind.