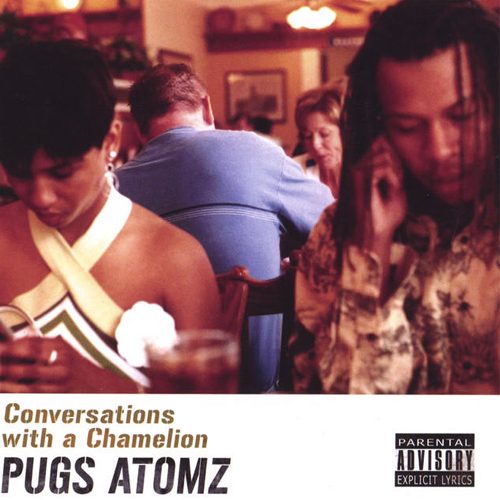 Pugs Atomz :: Conversations with a Chamelion

Chicago is catching the updraft. For a long time, you needed a sea breeze in the back to get worldwide coverage as an MC, but since NY and LA have run dry on contemporary idols, Chi city has become main caterer to the hungry masses. Com, Lupe, and ‘Ye are dominating the commercial airways these days, so why not let Pugs fill in the gap to become the next best thing in indie circles nationwide?

Pugs(lee) Atomz must be asking himself exactly that same question. He has been paying for his hip-hop membership card faithfully since ’93, and worked himself up within the ranks of the massive Chicago underground. His dreadlocked self can be found at any venue in the Chicago city area where the four elements are being represented: first row, front- and backstage. His list of accomplishments equals Al Capone’s enumerated misdemeanors. He was one of the founders of the Southside crew the Nacrobats, has been doing throw-ups in subway tunnels for years, hosts a radio show on WHPK-FM college radio, promotes, designs, supports, and visualizes his culture as presenter on a local TV-station.

“Conversations with a Chamelion,” his fourth solo album, starts out strong right after Atomz redoes this resume concisely on the bass-heavy intro “The Last Time.” He comes off as a modest guy, since the gospel singer repeating the title chorus makes it hard to hear what he is rhyming about. Whatever it is, this album is supposed to gently shove his past efforts into the shade. “Movement,” with plenty of horn for you to tap the floor, is an uptempo funky battle track which serves as a proper introduction for those who are not familiar with this Chi all-rounder:

“You talk bull at your door, matador
If the figures are good, I’m here to injure you and yours
It is an honor just to speak to the crowd
So you shouldn’t be allowed to speak out loud
I’m the best you ever heard in your life
It’s like I’m holding a knife and all you got is a mic”

After this battle intermezzo the album strays from his previous efforts by abandoning traditional boom-bap anthems. “Conversations with a Chamelion” zooms in on Pugs’s personal motivation to hold his ground in the competitive underground scene. He contemplates on his desire to get ahead in the game without losing artistic integrity on “Eye of the Storm,” and talks about the dedication that gave him longevity where others fumbled the ball on “Break Night”:

“I’m out the picture frame, just chasing a door
No need elaborating if you want the page that I’m on
Only making money if my hustle is strong
Drawing lines in the sand with the power of song
From the block to the stage, a lot of shit goes on
Acts strain for the race, but can’t run the laps
So much pain on their face that they just might crack”

The clever thing about “Conversations with a Chamelion” is how Atomz builds his songs around sampled choruses. It’s like he’s talking to the track, and the track talks back within scheduled intervals. On “N-Side,” he plays on words by telling about people surrounding him who want to “be back on the inside,” as the chorus amplifies. An ex of Pugs wants a way back into his heart, while a friend’s criminal ways make him look he wants to be, you fill in the blanks. On “Eye of the Storm” he takes the chorus game one step further by adjusting his lines to dialogue from an old flick so he can speak his doubts about how he can split the words starving and artist without losing track of the word artist.

Production on “Conversations with a Chamelion” never drops below average, but strong peaks stay behind as well. Colin Response, who produced eight out of fifteen, takes a liking to string instruments like mandolins and guitars. His melodious beats are well-crafted but blend into the background before the memory is able to catch on. The Hi-Tek produced “Black Boy” with its unearthly female singing and easy fingerpopping has the most airplay potential.

“Conversations with a Chamelion” is a tasty backpack snack featuring a veteran who sounds like he’s ready to move onto bigger and better things. Pugs has plenty of subject matter and love for his culture to go around, but his effortless diligence is producing worn patches on his soul. Hooking up with the likes of Hi-Tek more often could blow that big break in his direction he has been waiting for all this time.