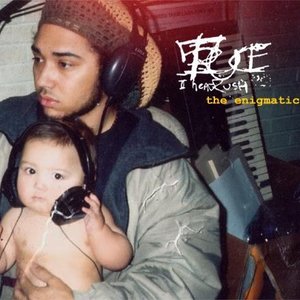 First impressions count. Try putting on a fake goatee, run into a convenience store, and start pulling all the shelves down. The distressed owner will describe that same goatee to the cops after you fled the scene. Go back the next night and mug the same guy wearing shades and a bandanna. The owner will forget about the beard and distrust bandanna sporting kids after that. Return the third night for a soda pop and a pack of Red Apples without disguise, and he’ll smile wearily at his late customer. Maybe he’ll even complain to you about the state of the neighborhood.

A debut album needs to have it all. Wordplay, bar control, voice matching the beats. Shock your listener the first time, rob him of his casualness, but don’t confuse or you’ll lose attention. Truce II Headrush, a father of three out of Cumberland, Maryland, has been brooding on his own solo release since the nineties. But by filling “The Enigmatic” with material he collected over the years, it stays unclear if he wants to rock, shock, mug, or roll.

The instrumental part of “The Enigmatic” reflects the better part of over ten years of musicianship behind the boards and the mic. Roughly half of the album is filled up with more traditional self-produced boom bap, while the other half features melodious guest guitar and the echoing sound of live drums. Before he went solo, Truce was in the local group Midnight:30 and he explains why he stopped performing with them on the self-explanatory “The Time My Girlfriend F*cked My Best Friend”:

“I call him a man, but I lied
That little boy lied to everybody, tried to hide up
The shame and disgrace from the time that he placed his hands on the thighs that I called mine
Now he’s lost, looking for himself, and I’m standing by
And there was a time that he wanted me to lie to his girl’s fucking face to say he didn’t fuck mine
But that’s a fucking lie, what kind of man am I?
(Yo, who am I?) You corrupt motherfucker, you asshole wannabe backstab motherfucker
Your apologies don’t mean a fucking thing
I’m just playing the game, but I forgive you just the same”

Most internal feuds stay public secrets, but the goaded Truce pulls open the curtains and puts a maglight on the main reason he went solo. The intensely personal song is accompanied by bare keys and steel drums, which give it a deceptive Caribbean cheerfulness. “The Time My Girlfriend F*cked My Best Friend” is followed up by an MC working class anthem with energetic Sega Megadrive VS Boom Bap beats. All that energy is stopped short by the compelling instrumental slow burner “A Slow Moment in Time,” with well-placed cuts, an organ sound so heavy it drags the bassline over the floor, and the crackling noise of an old record player. The live cut “Myagi (The Sound of Karate Kid)” eradicates all the dark dreams the previous song conjured up.

Truce II Headrush has an energetic, high-pitched tone-of-voice, which goes well with the more fast-paced songs on his debut album. By using the movie Karate Kid as an analogy for his growth as an artist (“Myagi (The Sound of Karate Kid)”) and mocking himself by reciting rhymes on an open mic night during “The Incident in Club Lefty’s,” he shows the will to surpass indie cliches. On the second half of “The Enigmatic,” however, he makes the cross-over to mainstream music more and more by redoing the pop punk classic “Pretty Fly (For A White Guy)” by The Offspring on “Wigger Kid.” The guest musician doing the chorus takes after the singer of Toolbox.

Since this collection is so intensely varied, it’s hard to get a reading on the direction Truce II Headrush wants to take with his career. Is he a live MC, who uses the energy of a supporting band to shine? Is he an old school hip-hop connoisseur who wants to bring the Golden Days back with the boom, the bap and a mic? Or does he go the way of the cattle rustler, sitting by a lonely campfire, and rhyming about life with his companion strumming a guitar? His debut, which is about to come out on Pro-Gravity Records, will most likely unravel that enigma.