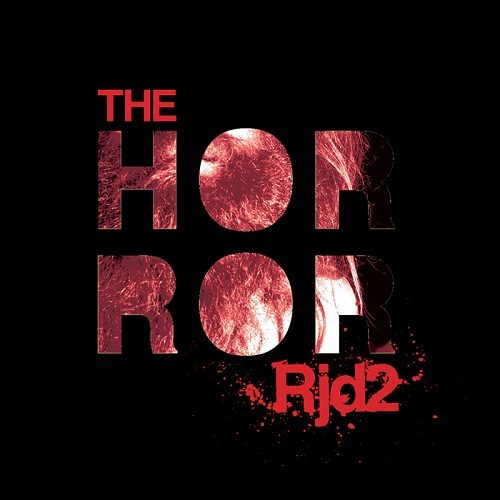 Long a bell ringer in underground hip-hop circles, and a “Dead Ringer” for the Definitive Jux label after his critically acclaimed debut on the larger national stage, RJD2 continues to be a producer worth watching and listening to. “The Horror” is presented as an EP of bonus material following up that smash hit from last year, packaged with an enhanced CD of live footage along with a behind-the-scenes look at making a video for the self-titled lead single, and even more digital goodies.

Bonus discs are always good, and even though Def Jux seems to favor enhanced CD pack-ins over the DVD kind, I won’t knock them for it. Either way though, it’s not what I was interested in upon picking up this release. RJD2’s rep is for futuristic beats that meld together electronica with hip-hop soul, creating collages that range from dark and moody to gritty and powerful; freely flowing between the two at the creator’s whim. The best comparison one could make, if forced to make one at all, would be the experimental flavorful stylings of DJ Shadow, meshed with the hip-hop sensibilities of El-P, with a dash of DJ Premier or Alchemist on top. I’d prefer to call it the ultimate backdrop. Backdrop to what? Damn near anything. RJD2 makes beats that sound great in your ride, great on a pair of headphones, and great during a marathon session of gaming. In fact if you own an X-Box, you may be tempted to rip and mix these tracks directly INTO your favorites games as opposed to just using the album as outside accompaniment.

RJD2 definitely works all the angles like a dilated hip-hop junkie, making music for the people. The horror is a fusion of the strength found in MF Doom’s “Hey!” (complete with appropriate Scooby Doo breakdown) with the the power of UNKLE and haunting beauty of a Stanley Kubrick film. If that’s more obscure references than a Dennis Miller rant, just sum it up like this: it’s a song built up with earthquaking bass, creep movie samples, and deadly melody. In other words, if Cage were rapping to this beat, it might be an apt sequel to “Agent Orange.” These are not short snippets of instrumental bliss though. The title track is a four minute masterpiece, and it’s “Ghostwriter Remix” successor is over five and two-thirds of the way to six. The “Final Frontier Remix” revisits a “Dead Ringer” track featuring underground rap favorite Blueprint, while “Bus Stop Bitties” stands completely on it’s own as an original track of hot buttered soul meeting modern mayhem. “Good Times Roll Pt. 1” though is a prequel of sorts to his last album’s “Pt. 2,” even though they are released in the opposite of natural progression order. Just think of it as George Lucas-esque.

The second half of this EP kicks off with another original track, “Sell the World.” It starts out sounding very mysterious, then breaks down into a piano jazz rhythm, then changes gears again until it sounds like a sly spy creeping down a darkened hall. That’s RJD2 for you – just when you think you’ve got the mood figured out, he keeps you guessing. These are not jarring transitions though, they are very smoothly done to the tempo and paint a broad picture where all the elements work together. The “June Remix” is another song from “Dead Ringer” that featured a popular underground MC, this time his former partner-in-crime Copywrite from the group Megahertz. Other than being radio-edited, it’s a great joint where Copywrite rants about “sixteen year-old netheads buying garbage/wanting to keep you for their personal private artists.” This is followed by a “Counseling” instrumental, a “Final Frontier” instrumental, and an “F.H.H.” instrumental; the latter two “Dead Ringer” tracks with raps that definitely deserve to be heard this way so that RJD2’s tracks can be more closely examined. It might be too cheap to lavish praise on his work and call it an audio masterpiece, but then again you’d be hard-pressed to find other producers who care as much about layering sounds together to make such exquisite musical bliss. EP or LP, if there’s a mostly instrumental hip-hop album in 2003 better than “The Horror,” please tell me about it because I want to know. Better tell me soon though, cause the year’s almost up and even though “The Horror” is a late entry, it’s still the frontrunner.