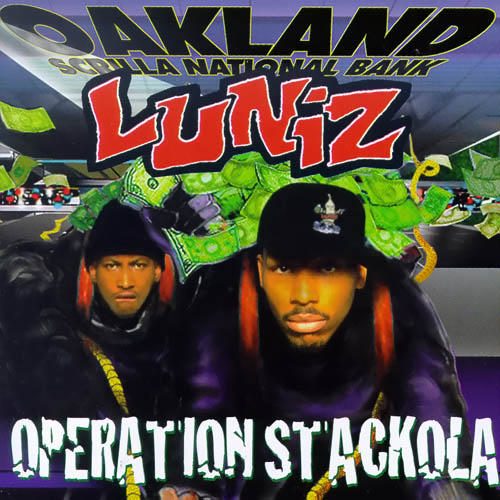 Rap fans have short term memories. They can barely remember last year’s hit songs, let alone those from a decade ago. But certain songs are just so good and memorable that they are remembered by generations of rap fans. The Luniz dropped one such song way back in 1995 when Tone Capone sampled Kool & The Gang for “I Got 5 On It.” The song was so good in fact that there were two different versions featured on the Luniz debut album, the original and the reprise. Because of this one song, the Luniz have cemented their place in hip-hop history as every new jack emcee eventually flows over the track on a mixtape. Yet, the Luniz’s success also was a curse as it overshadowed their dope debut, “Operation Stackola,” and also set up impossible expectations for the remainder of their career. Just as the group was never able to top thier first hit they also never topped their first album.

Assisted by some of the West coast’s top producers, “Operation Stackola” features track after track of smooth funk. Aside from Tone Capone, the album boasts tracks from Shock G (Digital Underground), N.O. Joe (Rap-A-Lot), DJ Darryl (No Limit), E-A-Ski (No Limit), and Terry T (Seagram). Blessed with such a dope line up, the Luniz didn’t waste a single track as they navigate smoothly through all facets of life in Oakland. They tackle money and women on “Broke Hos”:

“I wanna fuck and that’s it
After that split I didn’t kiss ya cause ya breath smelled like shit
I only stayed cause you was lickin me
But then I got fed up because ya dookie braids was stickin me
Ya lookin like ya from the blue lagoon
But I ain’t trippin cause I know that you’ll be leavin soon
Bitch, you only wit me cause you think dat I’m rich
You fuck twenty mo’ nigga’s, then come to me
Sayin you got the itch
But I ain’t got it punk, I used a jimmy
“Uh-uh, remember that day we was fuckin to Humpty Hump”
The rubber broke, and I jumped
Hit my head on the lamp
Cause I was amped, off of drank and the hamps”

“How can I get blame for shit
That a nigga really didn’t even do
One nigga did the dirt, but the blame is on the whole crew
I feel like O.J., and Rodney
A little mail, but still don’t be having no happy days like Potsy
Niggas get blamed for every thang
From robbin your house, to ho strolls
And the trafficking of cocaine
And if the sun turned black
“Yup a nigger did it Jim” or
“Get a nigger over here so I can blame it on him”

And talk about huslting in Oakland on “Yellow Brick Road”:

“This shit is too deep to let go, so welcome to the ghetto
Got no love from my moms an pops had to creep an cock heat wit my fellows
Niggaz from the Big O, always down to scuffle, had the hustle from the get go
And didn’t no…. body, give a fuck about Jerold
Not when I had hella dirt and lint in my dried up ass curl
Hit the dice game, hurled off the night train
So hang that four-fifth at my brain, if you want me to do the right thang
Ever since my eyes open, I watched the realest sell dope in
The 6-9 Village of East Oakland, hopin
My dad would come back, but that fool vamp
Now my mama spend my checks on woozies and the food stamps
That’s why my ass was pumpin gas, an shootin craps
So I can make me some rootin-tootin scratch
No dap from the school hoes
Now why did I cut school, fuck school, cuz me didn’t have no school clothes
I had to go, hook up a book up, now I’m a crook up
On the late night posted, slangin cakes like Hostess
Something ferocious, more candy than Reese Pieces
For human species, that wanna swap for T.V.’s and V.C.’s
I’m ready, like Heavy, nothing but love fo ya
Fedi dubbs for ya, the only nigga would glove for ya
It’s me, the Ice Creamery
So weasle down the Yellow Brick Road while I fold the greenery”

Both Numskull and Yukmouth brought their best on the album as Numskull’s straight forward and more lyrical style was complemented by Yukmouth’s animated flows. On the rest of the album the duo tackles the topics one would expect from West coast rappers, from being “Pimps, Playas, & Hustlas,” making plans for loot on “Operation Stackola,” and getting caught up in the game and having to “Plead Guilty.”

“Operation Stackola” is a crucial West coast album that is as dope as it is slept on. Numskull and Yukmouth differentiate themselves from other gangsta rappers by bringing a lyrical twist, humor, and engaging flows to the table. The production is vintage West coast funk that avoids being generic and fits the group’s laid back vibe. While I can’t recommend it enough, at the very least you can be rest assured you’ll get one classic song and that’s more than you can say about most albums released today.