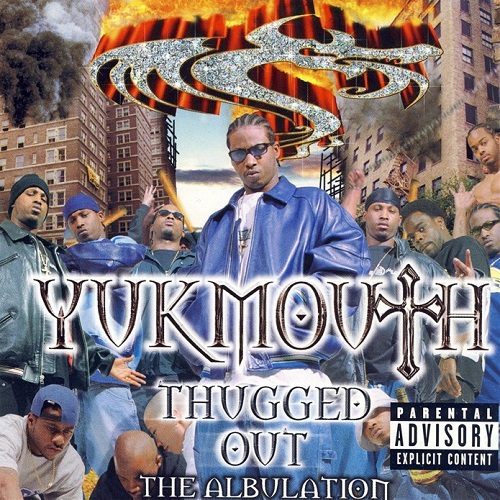 If The Luniz had five on it, does Yuk have two and a half?

Give the man credit: when you’re part of a best selling international multi-platinum Bay Area group, most people will tell you to stay put and not branch out solo. And Yuk himself says if the money’s right and the album is tight, he’ll definitely do another Luniz LP. But for now, Yuk is representing his own “Albulation”: a mammoth 28 track long compilation being released on one of the Dirty South’s most infamous and well recognized labels: Rap-A-Lot Records.

Yuk and Rap-A-Lot have some connections, and they pulled out all the stops on “Thugged Out” in a way that is unfortunately reminiscent of Scarface’s mediocre “My Homiez.” The Outlawz appear on two cuts, Tech N9ne appears on two, Fa Sho is on FOUR cuts, Luniz comrad Numskull is on two, DMG is on two, and artists Daz, Do Or Die, Kurupt, MC Ren, Tela and 5th Ward Boyz all clock an appearance each.

Yuk does present some interesting concepts: on “City of Dope” he claims that the movie ‘New Jack City’ was actually based on Oakland’s crack trade and that the hard-headed drug scene was started to destroy the Black Panthers. Tales of harassment by The Federales follow as Yuk and his fellow ballers are the innocents caught up by the game who are just “trying to retire with some change”. “Thugged Out” with Regime benefits from an eerie musical backdrop which may remind some Sony PlayStation fans of Final Fantasy VII. “Stallion” with MC Ren and Tech N9ne is presented as a worthy sequel to N.W.A’s “She Swallowed It” and is good enough to outshine anything that appeared on N.W.A’s 10th Anniversary tribute.

The song that perhaps deserves the most recognition is Yukmouth’s heartfelt “Father Like Son”. He spits the game to his son in lyric, and thanks the Lord “for blessing me with seed”. Some might be appalled that he wants his son to do dirty like dad, but he feels that genetics have already put it “in our blood” so he’s obligated to make sure that if his son’s gonna be in the life, he does it right. Give him credit for caring about his son’s welfare.

Too many tracks and too many tired themes weigh down what would have otherwise been a good single album. “U Love 2 Hate”, “Rolex Rulez” and “Mackin’ vs. Pimpin'” do not cover any ground that hasn’t already been cliched to death in gangsta rap. Yuk has a dope flow and can flip it off the tongue nicely, but he’s drifted away from the comical stylings which made The Luniz so popular and come way too realla. It may be the direction he’s always wanted to go, but it’s not a good change. Less hardcore and more comedy makes Yukmouth distinctive. More hardcore and less comedy just makes Yuk like every other generic banger on wax. This is one more double album we didn’t need. Dub the tracks with fat beats like “Ice Cream Man” and “Sad Millionaire” (revised versions of old Luniz hits) and sell it back.