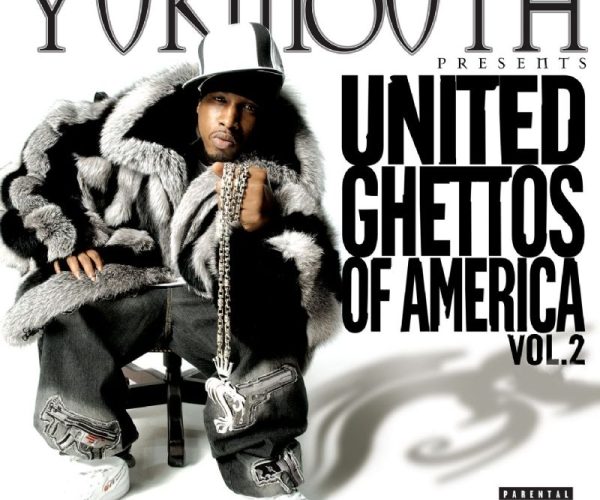 While Yukmouth proved on 2003’s “Godzilla” that he is indeed capable of being a monster in the rap game, he’s just as happy to play the background and orchestrate his “United Ghettos of America” series of albums for Rap-A-Lot Records and his own imprint Smoke-A-Lot Records. The series has not made a huge impression thus far despite carrying Yukmouth’s name, but Sir Smoke-A-Lot himself hopes to change that on 2004’s all brand new “Volume 2.”

It should be noted that the title is slightly misleading. While Yukmouth is clearly branching out beyond his Oakland roots to include other parts of the West coast as well as the dirty South, there aren’t any apparent olive branches to the East unless you count Noreaga on “We Just Wanna Thug” or Young Noble of the Outlawz on “American Me” (although to this day I’m still not sure whether they claim New Jersey, California, or both). There are certainly plenty of impressive and high-powered guest stars throughout the album though. Tech N9ne and his homies rap with Yuk on the moody “Kill Em Off” (misspelled as “Kill Em Of” on the back cover). E-40 and Crooked I help Yuk kick it like “Kalifornia G’z.” Bun B can be found on “I Love Dro,” Dru Down gets down on “Spin & Chop,” C-Bo and Richie Rich are on “The Side Show,” Planet Asia busts a verse on “Heat” and even the late great Mac Dre can be heard on “Get Stupid, Go Dumb.”

Having so many stars is both an asset and a detriment to Yukmouth’s success on “United Ghettos of America Vol. 2.” While Yukmouth appears in some form on a majority of the albums twenty tracks, his otherwise distinctive and entertaining rap voice tends to get lost in the shuffle. Since the album carries his name and is on his imprint, logically he should at least tend to be the star, or why else bother to have Yukmouth hold it down? While the Rap-A-Lot website professes that Yuk’s role at the label is more than just West coast kingpin, that role is not defined nor is it really important to those who still think of him as one half of the Luniz. With a solo career that’s already been all over the map from musically rewarding to seriously ridiculous, it’s shameful that the only two songs on here which showcase him best are “Suga Daddy” where he reunites with Luniz partner Numskull and the only solo track on the album, “Wet Dreamz.” In a way it’s a remake of Biggie’s “Dreams of Fuckin an R&B Bitch,” but it’s not one you can be mad at:

“I fucked ’em all from models to centerfolds
To rented hoes in videos, bitches in Kenneth Coles, now
I used to wanna fuck the leader of En Vogue
Before the Benzo when I was 10 years old
Now I wanna fuck Free, take her from A.J. and Luda
Stick a dick through her
Pipe her down like Roto Rooter
Make the bitch maneuver
My jewel’ll keep me iced out like Rick the Ruler
Then I fuck J.Lo, Trina, BeyoncÃ©
All in a mÃ©nage, off X and broccoli
And I got Missy ass waitin in the hallway
I’m not a +Minute Man+ fat bitch, I fuck all day
I take SadÃ©, get head on the highway
Then fuck that little Mexican bitch from _Next Friday_
I take Tyra Banks from Chris Webber
And fuck her and Vivica Fox both together
West Coast forever, now what’s fuckin with that?
I need gangsta love, so I fuck even Da Brat
Alicia Keys in the back, suck dick ’til they knees get scratched
Then pull they head ’til they weave detach, what?”

In short, this album could just as easily be called “J-Prince Presents United Ghettos of America Vol. 2” – he’s even listed as co-executive producer on the back cover along with Yukmouth. The production by Nan-Dogg, Amin Johnson and Mike Dean is solid albiet unspectacular, and the rest of the people who drop a joint like J-Classic don’t embarass themselves here. You certainly can’t fault the talent of the assembled guests either, everybody from the rising up-and-comers like 151 and Roscoe to established veterans like C-Bo and Spice 1 lending a hand lyrically. Unfortunately in the end “United Ghettos of America Vol. 2” doesn’t really do much for Yukmouth, much for the artists on it, or much for uniting ghettoes. The album seems to pay lip service to these concepts and not really act on them, and on the whole this is something you could wait to find in the bargain bin instead of rushing out to get, but would still enjoy if you copped it for a cheap price.