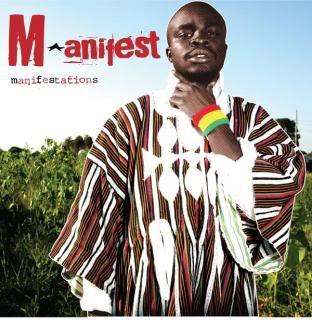 In a music and culture rife with issues deserving serious study, perhaps the topic most deserving of a scholar’s microscope is rap geography, both physical space as well as cultural place, and the role both play in cultural creations. No other art form that I know of strives for both the local and the global so adamantly (and, more importantly, so effectively). Peep that at the same time an artist’s paramount purpose is representing for and impressing his fam (and by natural extension, especially if he happens to come out of the inner cities where opportunities for fluid physical migrations are rare, his neighborhood), he is also going for world dominance (after all, in today’s globalized hyper-economy, going international means fat pocketsâ€”big up Ronald).

If anyone wanted an interesting case study for all of that, they could look no further than M.anifest, an MC hailing from Ghana (that’s Africa, shortie) whose now spent almost a decade in the Twin Cities, a unheralded but thriving and proud piece of the hip hop landscape. Dude is definitely a product of environments both micro and global- both in the way his physical journeys have informed his philosophy on the mic as well as how geographic circumstances forced his rap education to be varied and eclectic (you think it was easy to get rap music in Ghana in the mid-90s?). So while The Game takes inspiration from NWA and all five boroughs claim Biggie as blueprint maker, M dot learned from both of them and more. Paradoxically, being entrenched in the TC scene for a minute now has no doubt informed a style that mixes a desire for passionate express with a sharp candor and wit; these, after all, are trademarks of my local scene, built upon Slug’s weepy confessions and Brother Ali’s swaggering modesty.

So M.anifest’s debut “Manifestions” reveals all of this pretty clearly. With the help of a handful of trusted collaborators, his sound is heavily influenced by the likes of Jay Dee, Hi-Tek and the masters of the East (Soul Brother especially), but also shine with a freshness all their own. It’s the little touches, such as the reggae riddims of “Babylon Breakdown” or the propulsive drums pumping through “Gentleman,” that set the sound of “Manifestations” apart from most of the underground crowd, as by and large the product is both musically challenging (and informed) but also BANGING, while most cats strive for one and forget the other. A few missteps (such as vocals being buried under the busy “Spell Check” or the poor Neptunes-drum imitation on “Swing Low”) are easily overlooked in favor of a more accurate view of the LP as essentially timeless; like other quality Twin Cities releases by staples such as I Self Divine and POS, “Manifestations” can be described most accurately with one word: Solid. What you get is a known lyricist spitting his best stuff over beats that enhance the flavor. In other words: no major label pressure for a big dumb single, no overreaching to hit every demographic, just assured wordplay from a man whose flow is in the pocket, owning the soulful beats he rides like a well-worn traveler.

As for those lyrics, M dot’s got flavor and flow for days, with a voice that puts the slight African patois like a cherry on top of gruff but melodic English phrasings. Though only average thematically, most songs provide enough clever momentum to sustain interest, and if the straight-up kill the mic rapping doesn’t rub you right, the liberal doses of endearing honesty and thoughtful musings probably will. Both introspective and civic/city/global minded, M.anifest never stoops to sensationalist tales of drug-running and shoot-em-ups because he knows the most interesting MCs are those with genuine personae (keeping it really real, on the real). This openness leads to some missteps, such as the Xeroxed aping of Com’s “H.E.R.” on “She Lives,” but even these are pleasant, infused with love for the art and care in the craft. The uplift straddles the corny/inspiring line nobly, and the metaphors remain day old but still tasty.

Despite great tracks and great lyrics, a few gaffes and an overall lack of thematic cohesion hold “Manifestations” back from classic status. Whatever though, it’s still one of the top LP’s to come out of Minnesota this year (or any year), and would no doubt stack up well against any other regions’ best offerings, especially this year. Keeping it local to affect party people from down the block all the way across that big water, M.anifest places himself firmly on the hip hop map with his assured debut. Take a vacation from the polluted land of Clear Channel radio and visit “Manifestations.”