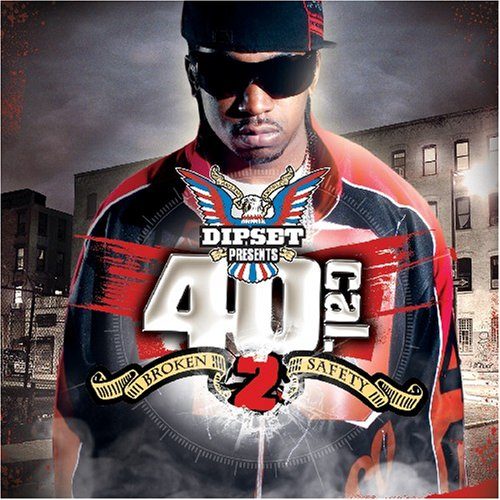 Love ’em or hate ’em, you have to admit that the Diplomats are prolific. The Harlem crew may not always make the best music, but they make a lot of it, putting out so many releases both collectively and individually that they put the Wu to shame. “Broken Safety 2” is Dipset member 40 Cal’s second proper album, coming on the heels of last year’s “Broken Safety” and numerous mixtapes. A seasoned battle rapper, 40 Cal uses the disc to prove that he is more than just another Dipset also-ran.

With a few exception, 40’s lyrics stay strictly rooted in being a drug dealing baller who’s nice with the ladies and quick to bust caps. However, he’s got skills, he’s clever, and he fleshes out his dealer/gangsta character with some much-needed humor and pathos. “Celebrity Hustle” showcases 40 Cal at his best, making ridiculous boasts over disco strings:

He goes on to brag about dealing coke to 50 Cent and steroids to Barry Bonds. It’s miles away from the hip hop verite of Mobb Deep or Clipse, and shows that 40 Cal has a sense of humor about himself. I only wish that he had enough of a sense of humor to drop the Scarface act more often.

The song that really won me over to 40 Cal’s side was “Getting By,” in which he takes a break from flossing and bragging to describe the poverty he grew up in. “This is for my peanut butter and jelly niggas that still wash their white-on-whites in the sink” he announces at the top of the song, before detailing his privations:

Much like Notorious B.I.G.’s slightly exaggerated claims of “being young eating five cent gums,” I’m sure there is a little embellishment in “Getting By”. Still, I appreciated the glimpse into 40’s childhood, and the way he humanized the hustler lifestyle by showing where he comes from. After all, Tony Montana wouldn’t be nearly as cool if he hadn’t come from the gutters of Cuba. 40 Cal does this with style and heart, and doesn’t just phone it in. He also gives a brilliant rebuttal to critics of “gangsta” or “negative'” rap. “You want me to rap positve?” he asks at one point. “Well positive’s not the way we live.” That pretty much sums up what David Banner’s been telling Capitol Hill this past week.

Doe Boy handles production on nine of the tracks, the Bangaz do three, and Shatek, big tyme, and Tai Jason handle the rest. They provide glossy, East Coast synth beats that reminded me a little of “Sean Carter” era Jay-Z, which is to say big, flashy, but not always memorable. There are definitely some highlights: the Dipset posse cut “Anthem” has a classic drum machine break; “Stick ‘Em” is so audacious it works, with its classical strings and nod to the Fat Boys; “Since U Been Away” could be a Kanye b-side, and “The Big Boys” is a decent (strip) club banger.

There are also a fair share of forgettable tracks, like the uber-cheesy “Drama Season,” “Give Me Some Head,” which is as stupid as it is sexist, “Neva Neva,” and 40’s collabo with Juelz Santana, “Dip-Dip.” These boring, by-numbers street rap tracks drag the album down and detract from the overall experience. The other issue I had was that mixtape veteran 40 Cal seemed to treat this project as a mixtape, too. From its generic title to his constant shout-outs, it felt more like something that should be packaged in a slim jewel case for $6.99, and not retailing for $17.99.

At the end of the day, “Broken Safety” has a couple great tracks and a handful of decent ones. Depending on your perspective, 40 Cal is either 3rd tier Dipset or an underdog who deserves more recognition. I’m not sure how 40 Cal will stand up in a month so flooded with releases, but he’s definitely delivered at least a few hot tracks that deserve a spin.