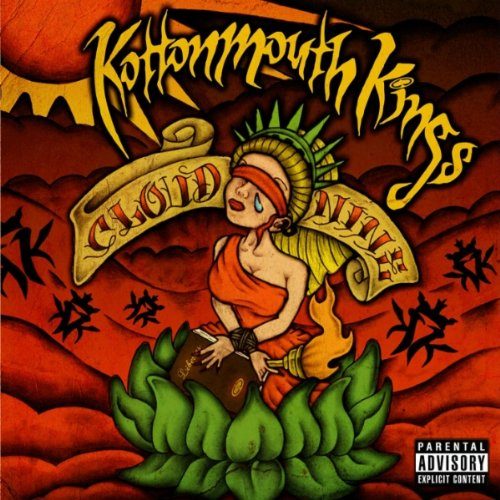 “This is Rip Hop,” according to the Kottonmouth Kings, a blend of punk rock and hip-hop music. With a (by hip-hop standards) huge, booming sound to their productions, the Kings combine an overtly aggressive musical sound to their themes of anarchy and free spirit â€“ all filtered through a haze of marijuana smoke. Rock-rap hybrids like this are always interesting for an open-minded fan, because the combination of the two genres always have the potential for something truly special.

Unfortunately, “Cloud Nine,” like many rock-rap combinations, is at least as much of a failure as it is a success. It takes incredible skill to combine the two genres effectively, and the Kottonmouth Kings don’t seem to quite possess it. “Cloud Nine” loses the rhythmic and lyrical complexity of great hip-hop, while failing to quite capture the raw feeling and emotion that good rock naturally captures.

“Cloud Nine” works best when it strays more towards one genre or the other. The brooding “Dark Side” retains a psychedelic sound, but is the purest hip-hop song of the group, and provides an interesting contrast to their more rambunctious material. Meanwhile, the crashing “Livin’ Proof” is the best music on the CD, blasting through rap’s common structural limitation. While the catchy lead single “Think 4 Yourself” is the rare occasion where the two genres are fused effectively, most hybrid songs like “Ridin High” seem aimless, void of direction.

What’s probably worst for hip-hop fans, is that the greatest failure of this album is in its lyrics. With few exceptions, the raps on this record are among the worst ever put on record. Thematically, they stick to weed and general freewheeling. This isn’t necessarily a huge problem, except that the execution of these themes is horribly done. This isn’t an album where a listener would expect incredibly complex lyrics, but d-Loc’s performance on “Livin’ Proof” is tough to swallow:

Overall, this album is going to be more fun for fans of rock than of rap, as it captures much more of the former’s spirit and strength. It’s not meant to be taken completely seriously, and it’s an effective head-nodding album, at its best when the momentum is at its highest. It also comes with a nice DVD, complete with videos, commentary, and live performance clips. For fans of the style, its well worth a listen.