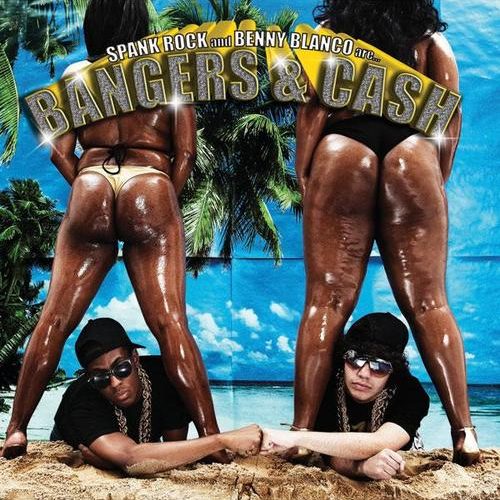 One of my favorite albums of 2006 was “YoYoYoYoYo,” the debut by Spank Rock. Spank Rock embody the Baltimore sound: equal parts hip hop, electro, Miami bass, and electronica, all distilled through a little hipster irony. The album was an ode to partying, sex, and having a good time. On this EP, producer Armani XXXchange steps aside so Benny Blanco can have a chance at the boards. Blanco and MC Naeem Juwan go to their roots, paying homage to the 2 Live Crew while giving that dirty Miami bass sound a facelift.

The cover of the disc is an homage to “As Nasty As They Wanna Be,” and four of the tracks sample the Miami raunch kings. “Shake That” opens with Luke and Crew declaring “Welcome to the fuck shop!” before Naeem raps:

“I got a dollar for you push it
put your ass up on that pole
If your friend over there lick it
then you might earn $20 more
How your knees don’t bend
with your hand flat on the floor?
See the sweat drip to your kush from your doody hole”

The beat, like all the tracks here, is all groin-punching bass, handclap beats, hi-hat snaps, and synth flourishes. It’s booty-shaking and brilliant. Speaking of booty-shaking, “B-O-O-T-A-Y” is an adrenaline rush that mashes Miami bass with electro glitch and a siren to create a frenetic ode to the female posterior.

The best track is “Loose,” an ode to hotties with naughty bodies at the club. The lyrics manage to both diss and pay homage to hoochie mammas:

“She a hoochie watch the miniskirt ride up
Dimes and pennies twerp get it hotter
Hootchies wanna get on the guest list
Eat a small dinner so they fit in their dresses
Fuck a meal go for bills big breasted
Shoot it like gas I’m serving dick for breakfast
Pussy pop she like three things
The club, money, sex, yes just like hip hop
Did a full strut when we pulled up
Said she liked D’s I said “These nuts”
Ain’t that what you want
A Hilton and a Trump
Making sex tapes get dick get cum
All this money make a bitch go dumb
Coke on the table make the bitch go numb
She ain’t nothing but a hoochie mamma
Hoodrat, hoodrat, hoochie mamma”

Amanda Blank contributes a verse defending the ladies, but lines like “I fuck to bust nuts, fuck a man’s respect/I rap for money to spend and to keep my panties wet,” would hardly impress bell hooks.

“Pu$$y” mixes things up with its screwed vocals. “Bitch!” is the oddest track on the album: It samples the signature expletive from NWA’s “A Bitch Iz A Bitch,” but mashes it with ambient synthesizer chords, a house beat, and a chorus that has a Trent Reznor sound-alike repeating “Cop Killer.” It’s bizarre, but kind of awesome.

Or rather, it would be, except for the fact that “Bitch!” is repeated about fifty times during the three minute track. I get that they are riffing off of 2 Live Crew, I get that they like sex, drugs, and partying, but it gets old and childish. The song titles read out “Shake That. B-O-O-T-A-Y. Loose. Pu$$y. Bitch!” Come one, guys, really? At a certain point, if you look like an asshole, and you are rapping like an asshole, you are probably an asshole. Spank Rock seem to want to dabble in old school uber-sexism with hipster irony, but it’s still the same old bullshit that wasn’t ok when Uncle Luther was doing it.

“Bangers & Cash” sounds amazing, and based on the beats alone would be the ultimate party record. Benny Blanco has truly updated the Miami Bass sound for this millennium; it’s just a shame they couldn’t update the lyrics as well. I don’t want Spank Rock to stop making songs about fucking and partying; I just want them to do it a little more intelligently.