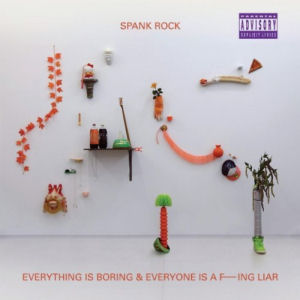 Spank Rock :: Everything Is Boring and Everybody Is a F-cking Liar

I was one of many critics who loved Spank Rock’s 2006 debut “YoYoYoYoYo.” I was irritated by the lyrics on the 2007 EP “Bangers and Cash,” in which Benny Blanco replaced Armani XXXchange as rapper Naeem Juwan’s DJ/producer. That was almost five years ago. A lot has changed since then. Benny Blanco helped Katy Perry get famous. Spank Rock toured with hip-pop party acts LMFAO and Ke$ha and didn’t release any new music. The economy fell apart. An African-American became president. Lil Wayne and T.I. went to prison. Kim Kardashian got married and divorced. In short, time passed, and it passed Spank Rock by. Is there still room in 2011 for a foul-mouthed MC who does dirty raps about sex and drugs over dance beats? The obvious answer is that, just like Jell-O, there is ALWAYS room for a foul-mouthed MC to rap about getting high and getting it on. The real question is whether or not Spank Rock will be that lucky MC.

This time around, he’s teamed up with German producers Boys Noize, who provide some electro Eurotrash beats. This is the first big weakness of the album. Spank Rock’s previous producers were Americans who were able to put some funk up in their techno. Now he’s working with two dudes from the land of Kraftwerk and tall blondes. Boys Noize try hard, but there is a Teutonic coldness to their beats that is a buzzkill.

This is exacerbated by the second weakness on the album, which is Juwan’s newfound seriousness. He’s not rapping about doing drugs so much anymore, which is a positive. Instead, he’s offering his take on politics, which are about as sophisticated as you’d expect from someone who parties for a living. He does get some good one liners off, like “If we get to the bottom of it, we can bring down the people on top,” or “Live for something, move for something, work for something, push for something, fight for something.” Other times, his attempts to get deep fall short, like on his pointless rant on “Turn It Off.”

“I hate my generation
Errybody always want something for nothing
You fags ain’t got no gumption
[…]
That ship has sailed out
Nigga you late
Get bailed out
Like the public school system
Automative industry
iPad
Farrakhan
Tower Records
Pope Benedict the XVI
Jay Leno
Suck a dick!”

Juwan’s use of the word “fag” is interesting given sissy bounce queen Big Freedia offers her foul mouth on the bumping “Nasty.” Maybe “fag” has become the new “nigga,” an offensive word that is being reclaimed and stripped of its original derogatory meaning. Tyler, the Creator has a gay DJ and claims he is the least homophobic rapper out there, yet calls everyone and everything a faggot. Maybe it is his way of taking the power away from the word. Or maybe he and Juwan are just trying to be shocking.

Either way, “Nasty” is where Spank Rock hits their stride. Juwan’s not trying to be deep, he’s just rocking out and being as freaky and nasty as he wants to be, yelling “Bend over the woofer, let the bass rub you down!” Big Freedia brings her aggressive bark, and it’s all highlighted by the chorus “dancing feels so much better this way,” as they party for their right to fight. “Race Riot” is another raunch fest, with Juwan riffing on the idiotic comments John Mayer made a few years ago about the racist proclivities of his genitals. Juwan takes it to the ridiculous extreme, and although I’ve read several reviews that thought this song was the worst thing ever, I kind of love it. It’s so dumb it’s smart, and Boyz Noize lay down some menacing horns and handclap beats, creating a song that is stripped down and bumping.

There are some other strong tracks on this album, including Santigold’s guest spot on “Car Song,” and “Energy,” which sounds like a lost Talking Heads song. There are also several that are either forgettable or downright bad, like the failed attempt to make a Black Eyed Peas song that is “#1 Hit.” The real bummer is how dated Spank Rock has become in just a short time. Odd Future are making hip-hop that is weirder, more transgressive, and more offensive than anything Spank Rock can cook up, Das Racist bring university smarts to their smart-ass reflection on race, and even the Black Eyed Peas have done a better (or at least more commercially successful) job of fusing hip-hop and dance music. Compared to them, Spank Rock feels as out-of-date as a $600,000 McMansion in the exurbs. Still, there are enough joyfully raunchy moments on this album to make it worth downloading at least “Nasty,” “Race Riot,” and “Car Song.” Spank Rock shines on those songs, and briefly fulfill the promise they showed with their debut.

Spank Rock :: Everything Is Boring and Everybody Is a F-cking Liar
6Overall Score
Music6.5
Lyrics6