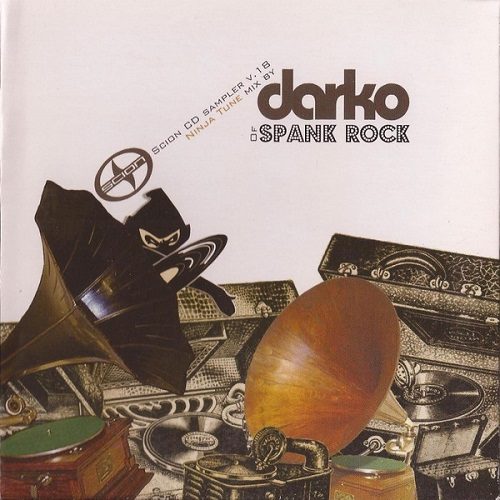 This is one of three discs I got free at Sunday night’s Ice Bears Tour in Omaha. This one wasn’t relatively hard to cop though since someone working for a good review from Matt Tomer last year. As such I was more than willing to take a copy home, rip it to ye olde iPod, and see what Scion’s got cooking this time.

Partnering up with Spank Rock fam is in charge of the mix on their behalf and can’t be faulted for selection or production. Things jump off quickly on track one with DJ’s Kid Koala and Herbaliser, then change up smoothly for 110 seconds of Coldcut, Ty and Hint all presented together. It’s not easy to pick out any songs presented entirely on their own or unmanipulated into new forms. This doesn’t detract from the presentation in any way. It turns the entire volume into a Friday night house party at your favorite club, where you could dance the night away to beats by Blockhead, DJ Food and Armani XXXChange without even knowing it.

That’s not to say there aren’t individual songs that stand out. Coldcut’s “True Skool” has a nice patois style rap and a backdrop of bouncy flutes and noisy drumbeats. For those who like to distinguish actual rhymes to the beats it may not be their cup of tea, but as a “mood song” I doubt the verbals are that important in this case. I don’t get to hear nearly enough French rap these days, but what I hear on TTC’s “(Pas La Peine D’Appeler Je Ne Responds Pas Au) Telephone” is cool – slightly simplistic in delivery, but cool. An unexpectedly refreshing dose of retro rock comes in the form of Pop Levi’s “Sugar Assault Me Now (Part 2)” and Herbaliser combined with Sharkey on the amusing “8 Men Strong” and “Darkness” hip-hop megamix.

I’ll be frank here – “Scion Sampler V. 18” is not for you if you’re strictly into simple loops, rhymes that play the forefront instead of the background, or turntablist wizardry in recorded form. Scion seems to feel their genre is that fine line between hip-hop and electronica and milk it for all that it’s worth. You may have already noticed that vibe in their TV commercials but these “sampler” compilations take it to the next level. Even for those who I’ve already ruled out with this paragraph keep one thing in mind – you might find this one for free at the next hip-hop show you go to. Even if you don’t think it’s your bag, why not give it a try? Like the Hieroglyphics said years ago, “You Never Know.”