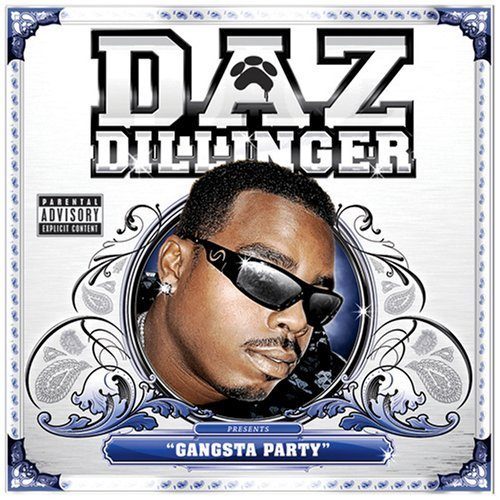 If Daz wasn’t releasing one to two albums a year, I don’t think he’d know what to do with himself. Having already dropped “Dogg Chit” earlier this year with his D.P.G. compadre Kurupt, Daz has wasted little time in coming back just over six months later with the solo album “Gangsta Party.” The title is a fitting one for Daz, who has proclaimed his love for drink and smoke repeatedly throughout a fifteen year career. Clearly that love for the party lifestyle helps to fuel his prolific album releases, because living life like it’s a gangsta party is an expensive proposition. California chronic doesn’t come cheap; neither do bottles of Moet and Patron. Factor in the homies and hoochies all trying to mooch off your paper stack and you’d better keep that paper stacked to the ceiling. Hustling legally to get it with CD’s beats doing it on the street with ki’s, and he’s managed to largely avoid the long list of legal problems plaguing his cousin Snoop.

Unfortunately the infamy that swirls around Snoop has also resulted in much higher album sales and a much more visible profile in the mainstream media, while Daz ekes out a living with a hardcore fanbase spread out across the world but centered largely in California, U.S.A. Daz attempted to bridge that gap on last year’s Jermaine Dupri distributed “So So Gangsta” but the album never charted higher than #35 on Billboard and hasn’t even been certified gold as of the writing of this review. Nevertheless Daz has not changed his strategy, even though he changed distribution and So So Def has nothing to do with getting this album in stores. In fact if anything this album takes his desire to “Gangsta Party” in mainstream venues further with the ultra-smoothed out “Caught Up in Tha Game” featuring Jagged Edge and Joe Budden:

“From the West coast to the East coast, down South
Where them boys gettin CHEEESE DOUGHHHH
22’s, 23’s, 24’s, 28
Look how I bounce back homey, flood it out with cake
No mistake, look at my crib, homey it’s immaculate
50’s, hundreds and dubs like labels I’m stackin hits”

Daz has switched his duties almost entirely to being on the mic and left the production to John Silva. For the most part Silva does not dissapoint. “Gettin’ Money” with E-40 and Kurupt is a musical throwback to old school R&B, complete with vocoder style hooks. “Gangsta Shit” would easily be at home on an Ice Cube or W.C. album. Daz shows a lot of love to the Bay Area and the hyphy movement on tracks like “All About Da Money” featuring Keak Da Sneak and Mistah F.A.B., “Tell Me What U Want” featuring San Quinn and Spice 1. Even the Outlawz get some love on “Gangsta Party Pt. 2” as Hussein Fatal and Young Noble get to record a sequel to the 2Pac & Snoop original. Unfortunately this was the wrong song for Silva to turn in one of his most apathetic efforts on the boards, which makes this song a lame tribute to the original despite the best efforts of the MC’s in the mix.

As is typical with a Daz solo album, even the strongest songs musically tend to walk the line of reality rap cliche lyrically. It’s hard not to notice songs like “Guns Will Blow” and “Do What the Fuck I Wanna” recycle not only familiar raps about how hard the street life is but song titles from other gangster rap artists and their albums. Daz’ strong reliance on guest stars does compensate for this to a certain degree but if “So So Gangsta” didn’t break through to the mainstream it seems unlikely “Gangsta Party” will either unless “Caught Up in Tha Game” catches fire and becomes the #1 club anthem coast to coast. It’s certainly a more worthy and deserving song than some of the inane snap songs of 2007, but unlikely to muscle out that currently dominant trend from its top slot. Daz will once again have to rely on his hardcore constituency that he’s held onto since the Death Row days to keep his “Gangsta Party” lifestyle going.