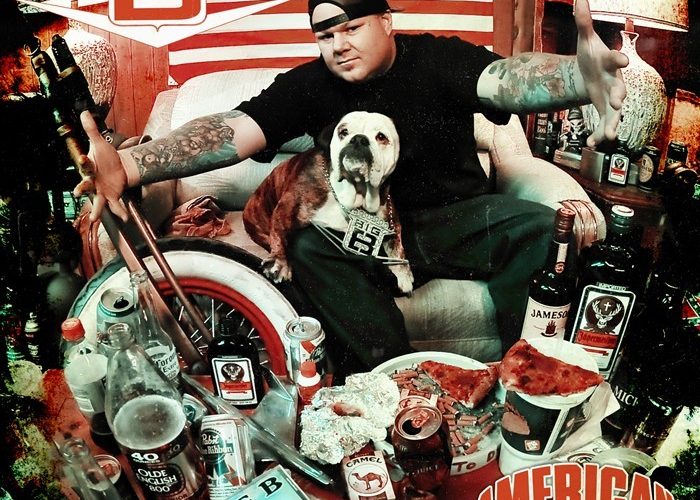 Fairly typical hip-hop bravado in 2009 until you consider two things about Big B – he spends as much time hanging out in tattoo parlors as recording studios and he’s a 6’7″ 300+ pound white boy. If you’ve just pictures a rapping version of Hell’s Angels, you’re actually not that far off, but it’s not as horrifying as you might think. In fact two positive past experiences have pre-condtioned this writer to consider Big B a little tighter – an acceptable (if at times unspectacular) 2007 album entitled “More to Hate” and a live performance on tour with the Kottonmouth Kings. The latter was the lynch pin to reviewing this new album. A lot of rappers Big B’s size and weight would be uncharismatic stage performers, but Big B was running, jumping, exhorting the crowd and sweating his big belly off. Whatever you might think of Big B or his self-confessed “white trash” friends the man is a performer and entertainer and a damn good one at that. Of course it doesn’t hurt that B’s message is a very populist one – eat, drink, (fuck) and be merry.

“Bars and clubs, house parties and pubs
Seven days a week, that’s all I’m thinkin of
There’s only three things that I truly love
Hot women, cold beer, and some real good drugs”

So sayeth our PBR rapper on the album’s second track “Hot Women.” Big B wants nothing of elitist high-falutin’ snobbery. “Keep your champagne in your glasses/save your half-assed V.I.P. passes/Give me cold beer tits and asses/Watch ’em shake it as the strobelight flashes.” The majority of songs on Big B’s “American Underdog” don’t stray away from the sex and alcohol theme. Even soulful horn and piano tinged songs like “Life Lessons” involve the kind of lessons you learn from OVERDOING IT with the women, drinking and drugs. Much as you might think fathering unwanted children and doing three year prison bids would slow a man down, Big B wants to “drink more, fight more, fuck more” right away on the follower “Drink More” with Johnny Richter. Some tracks are a little more hard rock than hip-hop, such as the Kid Rock-esque “Play These Cards” and “Born 2 Rock” featuring Jared from Hed PE. Big B fits comfortably into either style so it makes little difference.

For some (okay many) of hip-hop’s dyed-in-the-wool b-boys, Big B’s hip-hop style won’t fit in neatly next to Public Enemy and OutKast records. B likes to sing, he likes to sing aLOT, and in fact on songs like “Let’s Go Play” you might mistake him for a rastafarian version of Everlast. The sincerity with which Big B croons his vocals is appreciated but he should still stick to rapping first and foremost. His voice is already a little raspy to begin with (no doubt from all the drinking and smoking) and given that his tone is higher pitched than Everlast this is often an impossible to overcome combination. Still once in a while when he slows down the pace and keeps the singing to just the hooks on tracks like “In My City” he can pull it off and be just fine.

The one thing that may be working against Big B on “American Underdog” is the sheer volume of material. Even though some of the album’s 19 tracks are just skits and interludes it’s still a lot of chances for Big B to either fail or succeed musically – ironically there’s “more to hate.” He’s also working from a different cultural movement than a majority of the hip-hop nation, although the rural sentiments of Bubba Sparxxx are at times eeriely similar to Big B’s fast life in Las Vegas. Your taste for “American Underdog” may reflect your taste in beer and television. If a Nattie Ice or a PBR sounds better than a Lowenbrau or a Leinie you’re halfway there. If watching pro wrestling or American Chopper sounds better than Lost or American Idol too, then you’re 100% of the way to where Big B’s coming from. Feel free to pop the top on a cold one and get down with the “American Underdog” Big B, a man with songs you can occasionally miss but a live show you should never skip.