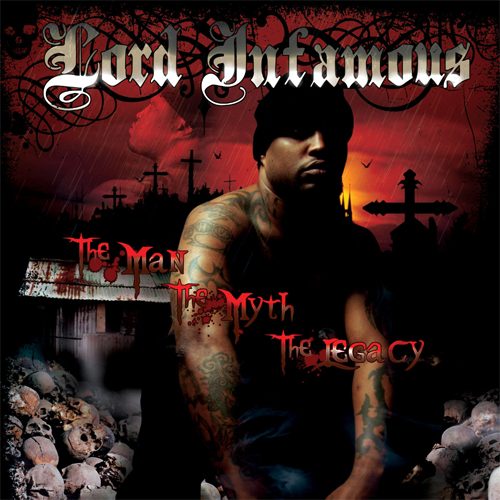 Lord Infamous :: The Man, The Myth, The Legacy

This is the moment that diehard Three 6 Mafia fans have been waiting for, for a long time. As a co-founder of the hugely popular group, along with DJ Paul and Juicy J, Lord Infamous is often known as the most malevolently violent and convincing rapper of the group. He is the one that has historically put the ‘triple six’ in the mafia. His 1994 solo debut, “Lord of Terror”, is still a local underground favorite in the streets of Memphis, though due to its limited release it is still essentially obsolete and unknown on a national level. Eventually Three 6 Mafia broke the barrier that separates regional popularity and national recognition, most notably for their work on the soundtrack for “Hustle & Flow”–an assignment that made them the first rap entity to win an Oscar at the Academy Awards. As a result of label politics and a fall out with group member Crunchy Black, Lord Infamous thought it be best that he leave Hypnotize for the time being and started Black Rain Entertainment with II Tone to make way for this, the long-awaited official solo “The Man, the Myth, the Legend.” Is the legacy upheld or will the release go down in infamy?

Most would think that a solo disc from Lord Infamous, especially on his own label, would feature darker themes than the typical Three 6 Mafia stuff because of the nature of most of his verses. The cover of the new LP also suggests a brooding, ominous image of tattoo-ridden rapper amongst looming shadows and shallow graves. In actuality, as Lord Infamous trades away the production assistance of DJ Paul and Juicy J for lesser known beat makers like D.J. Sounds and Jae Bino, he finds a musical ground that seems to reach some kind of commercial appeal. It is a minor adjustment that will not change any fans opinions on the artist.

Infamous, AKA the Scarecrow, starts off this LP with a romping self-appreciative anthem entitled “Where Iz Da Love.” His verses seem drowned out by the deep bass, compliments of producer Enigma. The chorus, however, remains extremely entrancing and will have listeners singing along the words of the song title.

“Frosty” could easily be considered as a possibility for the first single. Not only does this song feature co-founder of Black Rain Entertainment, II Tone, but it also has that certain element of popular Southern rap. It is catchy in the way “Crank That (Superman)” is, with another triumphant and upbeat backdrop. This time Infamous’ vocals seemed turned up to match the intensity of the instrumental and he sets it off with this radio-friendly hook:

“Neck, wrist, nice bling
White diamonds, ice cream
Frosty like the frosting on flakes
We call it icing
Yea we do our own thing
Toy with nothing but long chains
Long chains, long rings
Frosty like the iceman”

The term “Frosty” here refers to the ‘coldness’ of the jewels he ornaments himself with mostly, but also is associated with cocaine on the track. Okay, so it’s not entirely ready to make its way to public events, yet one would assume that Soujaboy’s track is not either if an angry mother understood the meaning of it. This is probably the most obvious cut that is specifically seeking popular support. To this end, the song succeeds.

There are so many songs on this album that are immediately accessible. They all tend to hit the obvious subject matter like the misogynistic views of “These Hoes”, featuring La’ Chat. â€œBankâ€, not surprisingly, focuses on making that dough over clashing cymbals. The song that might take the cake on the entire album “Yeah I’m Wit It” is simply a frantic Southern banger. The sounds of screeching tires, burning out, pierce through the ear and your head nods to a loose storytelling track about gunning down unsuspecting victims.

One would think that some of the weaker moments would be a result of not being associated with his Three 6 Mafia stable; however, the problems with the album usually are a result of some unfocused and inspired lyricism. Aside from the rock-influenced “Jump” the production team comes through in a major way with a majority of thumpers. Both “Pussy Stank” (6:07) and “The Roll Song” (5:07) offer weak verbiage throughout their extensive clock time. The latter with ridiculousness like, “let me get your number/and put mines in your phone/ call me when you leave the club as soon as you get home/ we can be together, you don’t have to be alone/pass the triple stacks and have a party of our own.” The only other issue long-time fans may question is the lack of guest spots from his old fam, really just limiting extended invites to La’ Chat and T-rock. The others that do make an appearance (II Tone, Da Crime Click and more) all do a fine job though and generally make you not worry so much about past affiliates.

Infamous is such a strange word when put in the context of the rap world. Much like “notorious”, a word with negative connotations is actually a positive trait. “The Man, the Myth, the Legacy” finds Lord Infamous not necessarily living up to his name as much as he has at times in the past. The LP reaches great peaks and low valleys. Still, as a whole, most will find the dirty south disc to have an entrancing quality well worth a listen.