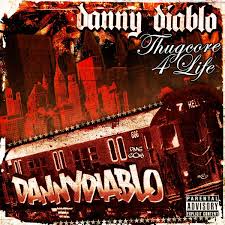 What is Thugcore? New York City native Danny Diablo attempts to define the subgenre on his 12 track CD, “Thugcore 4 Life.” Lyrically, Danny Diablo is closer to the hardcore southern and west coast gangsta rap that permeated the 1990s than he is to Esham or any other horror core rapper. Musically, Danny Diablo starts differentiating himself as he drops those hardcore raps over rock inspired beats. The result is surprisingly fresh, albeit catered towards fans of the genre. If you need a comparison, I’d actually liken Danny Diablo to M.O.P. – though not quite as animated. Diablo himself brings a thugged out lifestyle, Puerto Rican and Jewish culture, and New York attitude to the table. On paper, the mix that is Diablo sounds like it shouldn’t work, but upon listening it turns out to be one of the better albums I’ve heard coming out of this extreme sub-genre of hip-hop.

The album opens up with “We Don’t Care” which was not my personal favorite and not the best track to start the album with. The music hits with throbbing guitars hitting you from all directions and on this one Diablo adopts a style that is more rock than hip-hop. For fans that lean towards the hip-hop side of the spectrum this might be a big turn off. If you get past this, you’ll find a much more tolerable Diablo. “Get Down” starts things off with some ill scratches and a more subdued sample replaces the guitars. The beat is a simple but head nodding as Diablo drops verses:

“I’m in L.A. but my wings been clipped
Where bitches love to act, triz, and strip
No pride, no self esteem
Just a whole bunch of nose candy, pounds of weed
Unstoppable, like a demon in the dark
Lethal laced the beat so ignite and spark
The one and only, live in the flesh
Bleeding these streets, milky as breasts
Breaking these fools, smoking that kush
Ready for war, just like Bush”

As is the case with many of the subgenres of the rap world, the emphasis is on style and mood and not necessarily on lyrical prowess. “Banged Out” finds Diablo returning to his rock roots as he is more yelling/singing than rapping on this one. Once again, not my favorite but I have a feeling Thugcore is all about this genre mixing. “Funky Rhyme” brings thing back to the hip-hop and is an old school inspired posse cut as Daddy X (of Kottonmouth Kings) and Stress and Havok (of The Subhoodz) join Diablo to help drop “funky rhymes.” “Jersey White Trash” is another forgettable track with Diablo doing the rock thing. “I’m A Shotblocker” comes up next and is another posse cut repping one of Diablo’s crews. “Livin’ By The Gun” returns to the hardcore as Diablo concocts an ode to guns and the violent lifestyle over a roots reggae inspired beat. “Satanic Shamrocks” finds Diablo putting together another all star cast of thug core rappers as Skinhead Rob, Slaine, Big Left, and Dannyboy make appearances. Skinhead Rob is the same guy who was featured on Bun B’s “Trill” and is in a group with Paul Wall and Travis Barker. “Unstoppable” sees Diablo get as personal as he’ll get as he crafts an anthem that is as uplifting as thug core can be. Skinhead Rob returns on “Mechanix” and is joined by Necro to form what is probably the most “hip-hop” track on the album. After another forgettable track, the album ends with “Hardcore 4 Life” which is essentially the title track and finds Diablo really grabbing your attention as he sprays the track with the n-word from start to finish. This is most surprising considering the rest of the album is void of the word.

Danny Diablo is definitely geared towards a very specific underground crowd. Though he boasts some big mainstream affiliations, Soul Assassins and Skinhead Rob, it’s difficult to see him expand past the thug core fan base. For one, there will be those who will be put off by his hardcore content. On top of that his heavy use of the N-word coupled with an appearance from Necro will surely cause controversy and put off some heads. I’m not here to judge who can’t and can use the word, and there have been many Puerto Ricans who have used the word before, but being he is half Jewish and looks more white than Puerto Rican may cause some problems. Necro’s appearance won’t help since he too has been criticized for the use of the word. Either way, the word was completely unnecessary especially considering he caters to a hardcore fan base that consists of mostly white males. If you can get over that and enjoy the punk rock hip-hop connection Danny Diablo provides a good mix. He has a charismatic and commanding voice and the beats tend to be on point. His lyrics leave a lot to be desired, but I suspect fans of the style get lost more in the hooks and music than in the actual word play.