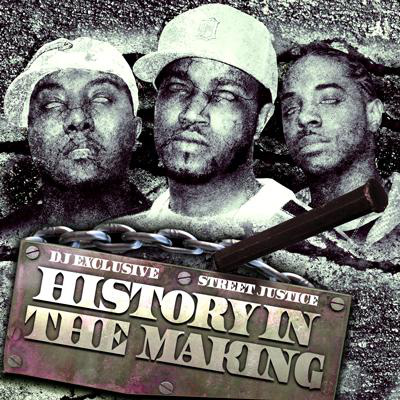 Street Justice :: History in the Making

Forget the established but stagnant Chi-town scene and the flash-in-the-pan output of the Lou; aside for my personal bias for the Twin Cities as the capital of Midwest Hip Hop, I think the D could have things on lock; especially if they have other acts of Street Justice’s caliber floating under the radar. From the opening lines of their latest mixtape History of the Mixtape, the Detroit-area rhyme trio makes it clear who they’re rolling with creatively. From the jazzy laidback but grimy boom bap soundscapes they favor to the effortless back-and-forth rhyme styles crisp with articulation while full of hidden rhythms and infectious humanism, these cats are squarely on the correct side of the love versus commerce schism currently pervasive in hip hop. Reminiscent of fellow tru-schoolers like Madlib, Little Brother and of course J Dilla but not derivative of any of them, Street Justice deserves to be known worldwide by all lovers of thoughtful, well-crafted rap music like their fellow left fielders.

A mixtape that’s nearly as polished and cohesive as any official LP released this year, History overflows with uniformly dope beats (courtesy of inspired board work by Oddisee, from the acclaimed Low Budget collective) and topical song structures that prevents the mundanity of the typical braggadocio-filled mixtape. Trading 16 bars like a juggler on his grind, the three MCs seem to share a common creative and philosophic outlook, while keeping their vocal presentations just varied enough to be able to distinguish each one from the other. The occasional battle rap is mixed smoothly with self-depreciating wit and move-the-crowd exhortations (’cause like the Abstract Poet might’ve said, what are intelligent lyrics without ass-shaking party starters? Nada nada nada…), while a few tracks even attempt (and succeed at) genuine introspection and revelation, with a handful of clever similes thrown in like the cherry on top. Whether rocking machine-gun flows and wiser-than-their-years observations of “Sights That We Seen” or the straight-up heat of “80 Bars Dash,” the trio masters many styles and never slips. This is Hip Hop for fans of real Hip Hop, music that is both dope and feel-good, both aware of its place in the history of classic rap yet also eager to further it. If this is just a mixtape, giving these dudes the time and money to record a proper full-length is a truly scary concept.

Unlikely to get major label or radio love due to uncompromised complexity and lack of ignant shit, fans of Street Justice (or good rap in general) can either bemoan the fact that a group of this caliber will never get the shine they deserve, or they can search them out and support them now, in effect becoming a vital part of the very ascension hoped for. As a weary but hopeful member of this here Hip Hop generation, I say the time for organizing around the things that matter is now. Let’s start with quality rap music; who knows, maybe within my lifetime we can rally around issues of health care, decent housing and jobs as well as education and paint the muhphucking White House black (now that’d be some true ‘street justice’). For now, I guess it’s enough to support artists bringing the heat like this.