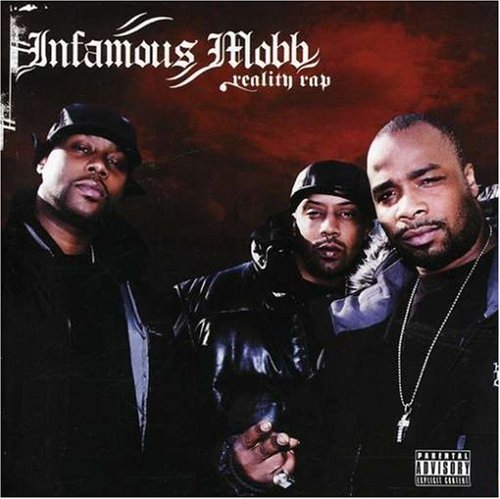 It is hard to believe that the Infamous Mobb are returning for only their third album eleven years after they guested on Mobb Deep’s 1996 release â€œHell On Earthâ€ – clearly, they have had their fair share of trials and tribulations within that period. In fact, â€œReality Rapâ€ has been brewing for three years in its own right (held back due to label issues – surprise surprise) – at least the album is pretty much worth the wait, as Ty Nitty, Gambino and Godfather Pt 3 sound energized from the off, supported by production values ranging between average to special. More than anything, however, the album is determined through the uniqueness of character – amidst fairly standard topics and lyrical content, the vocals are quite unlike most of what you will hear from your average identikit rappers. These guys freely admit to not being the greatest rappers of all time, but best believe they have personality to burn.

It also helps having friends in high places: three producer/rappers that contribute both verses and beats are the Alchemist, Erick Sermon and Havoc. In truth, these are probably the highest point in the album: Sermon’s beat and chorus for “Betti Bye Bye” are so weirdly wonderful; Havoc features on his own beat, the stunningly beautiful “Blauu!” which is a lush soulful number; our boy Al, everybody’s pal, the Alchemist laces the title song with a solid soundscape, and rounds things off nicely on the album closer “Hustle Hard.” Even Evidence drops in to produce the retro slowed-down Street Fighter 2-ish “Music 4 the User.” However, these are but a few tracks out of a fairly long sixteen-song set. The lower-ranking producers, if you will, fare less well – which, in all truth, is somewhat surprising, as so many virtual unknown beat-crafters have impressed the hell out of me recently. Those that do manage to mark successes include Urilius with a 1980’s throwback slice of melodrama and Sid Roams lacing the piano-driven “Get It Poppin.” Aside from that, the music isn’t wack per se, but it is certainly nothing to email home about. Lyrically speaking, the MC’s cover a variety of topics – none of them particularly original – with confidence, and whilst they don’t push any boundaries, they handle proceedings nicely enough.

To be honest, “Reality Rap” is pretty much exactly what you would expect from Infamous Mobb. There really isn’t too much else to report, as this album is solid for what it aims to achieve – it just hasn’t happened to make that much of an impression on me. That isn’t me critically destroying it – the album just isn’t my style, which is not to say it isn’t yours. It is fight music, rough and tough for the streets, with occasional soulful and poignant notes; it features strong producers from a few well-established names, alongside some fairly good beats from up-and-comers, and includes a couple of cuts from one of my personal favourites, Alchemist. This crew won’t set the world on fire, but they sound comfortable in their own skin, and that is just fine. After all, most artists search unsuccessfully for a lifetime trying to be themselves on wax, and to manage that on one album alone is an achievement in itself. The true reality of this album isn’t really WHAT they are describing; it is more simply the reality of them being their own natural effervescent personalities.