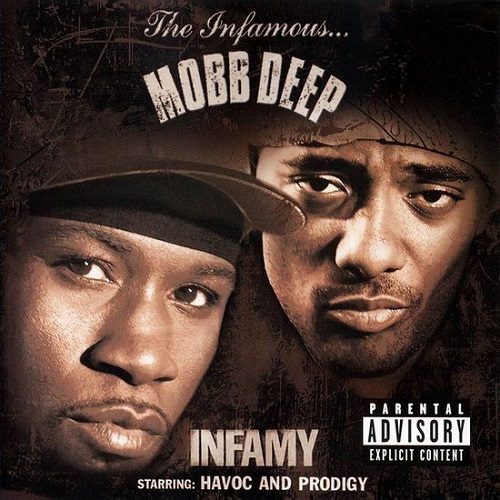 Judging by the first two singles released from this album alone, one might be led to believe that “Infamy” was a fresh new release from Mobb Deep. “The Learning (Burn)” has a mesmerizing and repetitive Havoc beat that’s a dead-ringer for the Neptunes, and the follow-up “Hey Luv (Anything)” features a silky R&B groove that meshes grimy Mobb raps with crooning from 112. In fact, it’s practically the remix of 112’s “It’s Over Now” in reverse.

Between the success of Prodigy’s solo album “H.N.I.C” and these two singles, Mobb Deep has raised some pretty high expectations. A lot of their fans have been waiting for the return to the days of “The Infamous” and “Hell On Earth” – two of the most hardcore rap albums of the 1990’s. Sadly, this isn’t it. Recent converts may not realize what they’re missing, but veterans will search aimlessly through this entire LP hoping to find fire comparable to bangers such as “Drop a Gem On ‘Em”, “Survival of the Fittest” or even Murda Muzik’s crossover hit “Quiet Storm” which inspired the 112 remix.

That’s not to say that this album doesn’t have a few joints which capture the dark grimy Mobb Deep sound. The snarling sound of “Clap” would be good background music for a game of Unreal Tournament. “Get at Me” is a quick-stepping Alchemist beat punctuated by flutes and horns that perfectly meshes with Prodigy and Havoc’s raps. “Here I Go Again” with Ron Isley has a Scott Storch beat that’s ethereal and gritty at the same time, and EZ-Elpee’s “Get Away” beat and vocal samples combine to give ominous warning to anybody who wants to fuck with the Queensbridge duo. Did Havoc really rap, “That ass’ll be bleedin somewhere, like a hemophiliac exactly” though? Maybe he’s trying to make light of Prodigy’s medical condition by using it as a threat to their enemies, but it seems to be in poor taste.

For whatever reason, the usually reliable Havoc seems to have strayed from the formula that once made Mobb Deep albums ghetto gold. This problem started with the “Murda Muzik” album but has only been exacerbated by this release. Track after track from Hav’ just seem to be monotonous: the ironically titled “Bounce”, the unfortunate triple-cadence attempt of “Handcuffs”, and the sad “Hurt Niggas” where Prodigy actually compares himself to Ray Benzino – a bad executive decision. Towards the end the jazzy pianos of “Crawlin” (the rebuttal to Jay-Z) and symphonic violins of “Nothing Like Home” are something of a comeback, but it still leaves the listener with an uneven album where a lot of the best music comes from outsiders. Prodigy is typically gritty and surreal, and Havoc provides the added voice much missing on P’s solo, but unfortunately this is not the fire those who heard “Burn” would have hoped for – just a few flickering embers that warm you up best if extracted from the ashes and made into a hot mix CD. The rest of the tracks won’t get played much and should be doused with water and left to smolder.