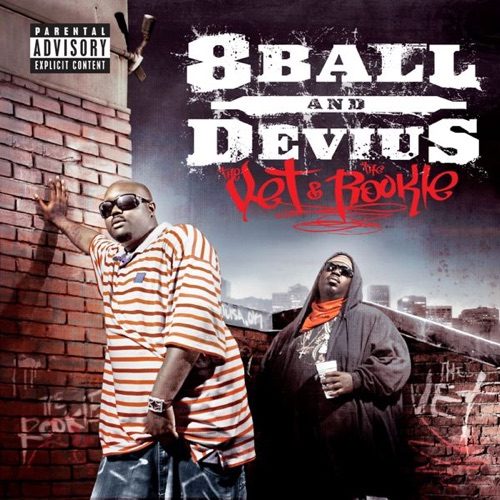 8Ball and Devius have one thing going for them straight from jump – truth in advertising. The album’s title “The Vet & The Rookie” is 100% accurate. 8Ball is a veteran of the rap industry with over 15 years of experience rapping and releasing albums, while Devius is (at least to this writer) a complete unknown who has never put out an album in his life. One might ask why 8Ball would link up with a rookie to record an album, particularly when he’s been musically married to fellow Memphis microphone master MJG almost his entire career. If you think they’re splitting up rest-assured they’re not – in fact in the liner notes 8Ball refers to MJG as “my right hand man.” Instead this is simply a chance for 8Ball to pair off with a promising up-and-coming MC, one whose style he has said “remind me of a young me,” while simultaneously promoting his 8 Ways Entertainment imprint. Besides the practice is not at all unusual in rock music – Slipknot and Stone Sour for example.

Undoubtedly 8Ball intends the fans of 8Ball & MJG to still associate “The Vet & The Rookie” with his prior catalogue, or the two would have chosen a moniker for their hip-hop duo that initially disguised the membership. By the same token Devius intends to be associated with 8Ball in the group’s name as it immediately elevates him from an unknown rapper to one worthy of co-star billing with 8Ball. It’s a win/win situation as long as the music bumps and both rappers deliver a solid performances, and the lead single “Er’Body Kno’ Me” definitely fits the bill:

Devius: “Bitch I party like a rock star, no it ain’t the Shop Boyz
Call yourself a baller, what the fuck you got a top for
Hit the scene, lookin like a mill’
Polo wears hang, I was fresh befo’ the deal
Force Ones icy, fresh up out the box
They can’t wait to see what DeBiase drove up on the lot
It’ll be the old school with the outrageous wheels
Or the whip with funny doors and the engine in the rear”

8Ball: “Eightball, I’ve been raw since the first days
A Bad Boy and the President of 8 Ways
City to city pretty women jock my swagger
I’m movin slow cause I got purple stuff off in my cup
My chain swangin, thang blangin like a chandelier
2008 Ways, yeah player that’s my year”

No that’s not a typo in Devius’ verse – everyone refers to him as “DiBiase” throughout the album to cement his “Million Dollar Man” status despite being new to the game. Devius is not offensive as a mic wielder, having all the requisite skills one would need in terms of diction, flow and breath control. By the same token though being acceptable is not the same as being remarkable. His braggadocious lyricism is cliche, his punchlines aren’t exceptionally witty, and his flow doesn’t advance the craft of rapping one iota. That’s not entirely fair though given he is brand new to hip-hop (or at least major label releases) and not every rapper needs to be the next Aceyalone or Rakim. Devius doesn’t embarass 8Ball on this release.

In turn 8Ball has more than enough wit, swagger and personality to carry the project for both of them. His gravelly voice and pimptastic flow are a proven commodity after this many years in hip-hop, and as the old saying goes “if it ain’t broke don’t fix it.” The end result is that 8Ball brings Devius up a level from where he’d be on his own and the two are a perfectly functional duo. Montana Trax in turn elevates the pair another level with a strong variety of beats. “Jus’ Ridin” is exactly the kind of track I’d want to cruise around with the top down to if it wasn’t so cold in Omaha this time of year. “Ice Cream” is a surprisingly sly and enjoyable update of the Raekwon the Chef classic, inspired by the original’s chorus and topic matter but featuring all new Southern rhymes. “Hustle Hard” strips things down to bass beats, a low-key melody and a solitary clap during the rap verses and showcases why in hip-hop less is often more. From the “Pass the Rock” at the album’s beginning to the “Promise” at the end, Montana Trax delivers a solid set of songs and is as much the star of “The Vet and the Rookie” as the rappers billed on the cover if not moreso.