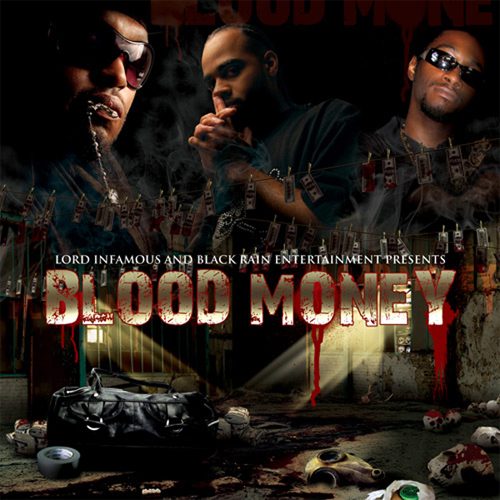 Pick up a penny off your desk or shake one loose out of your wallet. Designate “heads” Lord Infamous being in Three 6 Mafia and “tails” him being completely solo and on his own, or vice versa if you like. Flip it ten times. The laws of probability say that the results should be five of each side, but there’s a good chance it will be 7 to 3 – maybe even 8 to 2. The more you flip it though the more even the numbers will get. By 50 flips you’ll get to 26 for one, 24 of the other. By 100 flips you’ll get to 51 to 49. For confused and mystified readers wondering what the hell this has to do with anything, the point is that Infamous’ status with the Mafia might seem obvious with just ONE coin toss – he’s either in or he’s out. Even with ten flips you might think one answer seems more clear than the other. Eventually though the whole thing is a wash.

One side of this coin is the official press release from Infamous’ PR people, referring to “Blood Money” as the fourth solo album from the FORMER Three 6 Mafia member. The other side is a solo album by DJ Paul called “Scale-A-Ton” we reviewed earlier this year. Infamous a/k/a The Scarecrow appears on eight songs with his real life brother, and various websites around the internet reported that he was officially back in the group. There’s no doubt this move would make sense given Infamous is a founding member of the Mafia, the length of time Infamous spent in the group is FAR longer than his time as a soloist, and there’s real life family ties binding Paul and Infamous together. Here’s where it gets interesting though – while Infamous appeared on almost half of “Scale-A-Ton,” NONE of Three 6 Mafia appear on “Blood Money.” There are no cameos by Juicy J or DJ Paul. Not a single one.

There’s undoubtedly a Three 6 Mafia fan reading this review going “So WHAT?! As long as they produced some tracks for Infamous, it’s gonna be trill.” Bad news – they don’t do SHIT on “Blood Money.” That famously funky, heavy, deep and dank production that Paul and J are so famous for has not been contributed to the album. A slew of other producers step in to make their own attempt at giving Lord Infamous the Three 6 sound with some degree of success. Mossberg has his hand on six songs and may be the best of the bunch. The evil piano keys and slowly dragged bassline of “Niggas Like You” is a throwback to the most ominous Three 6 tracks. “Choppa Talk” is triumphant symphony of synthetic horns in the chorus matched with a sinister high speed psycho sound during the verses. “Been Bout It” is as beautiful as it is dark – ringing church bells off-setting a spooky sound well suited to a Scarecrow. Take my word for it – if Mossberg did it, you’ll like it.

Much like those 100 coin flips though, “Blood Money” ultimately ends up being something of a wash. While the LL Cool J remake on “I Need Drugz” is amusing, it’s worth noting that Necro already did this parody with the same title a decade ago – and his version is funnier. There are also a lot of cameos by members of Infamous’ new Black Rain Entertainment clique. Some are credited by name, many aren’t, and in either case there’s not nearly as much SOLO material from Lord Infamous as the album and/or press release would lead you to believe. The songs that best imitate a classic Three 6 sound and style still work such as “What You Bitches Wanna Do” and “1-900,” but one can’t help but feel there’s something missing while listening to “Blood Money.” If Infamous is completely solo and on his own, he should get to showcase the lyrical abilities that made him integral to Three 6 Mafia’s success over the years. (Let’s face it – neither DJ Paul or Juicy J are going down in history as all-time lyrical greats.) Instead a bunch of second bananas crowd the spotlight and the only big name cameo is Chamillionaire on “Love My Whip.” If Infamous really is back in the Mafia, they should have played a prominent role on “Blood Money” yet they are totally absent. Keep flipping that coin while you try to figure out whether or not he’s back in the group, and while you’re at it, do the same to decide whether or not you’ll purchase this album.