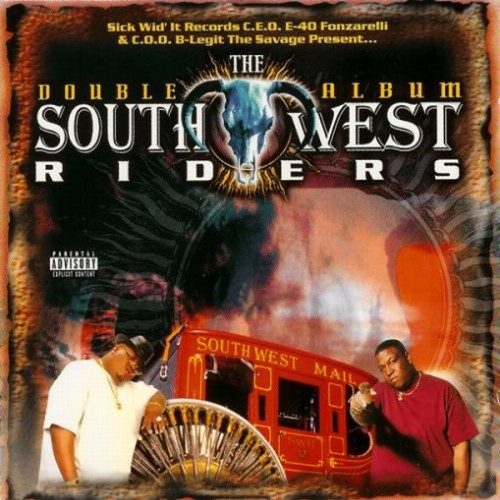 Who were the Southwest Riders? Well, back in 1997 Sick Wid’ It was pretty much on top of the game when it came to independent rap. E-40’s independent label was one of the few who had major distribution and the man had scored big hits on his first two albums. With all the hype, he hooked up with cousin and fellow Click member B-Legit to show some love to the rest of the country. Granted, they missed the East Coast on this one, but to their credit, when it came to independent rap hustles it was clear that the bread and butter that fed E-40 and his Click for years was concentrated in the Southwest. The cousins decided to give almost everyone who had the hustle a chance to shine on this heavy double album.

OG Herm kicks things off with a nice little intro. Always the smart business man, E-40 makes sure the first thing we hear is a Sic Wid’ It act in the form of A-1. The group was always a favorite of mine but never quite took off. “Represent” is a nice mobbed out track, with a murky bass line and soulful vocals in the background. The first stand out track comes courtesy of WC. On the verge of his first solo record, W.C. opened eyes on “Walk With Me,” showing he could handle a track all by himself:

“Now as I look to my rizight and my lizeft
I see my sizelf standing face to face with dizeath
Will I live to see my little one grow to be a G
Like his daddy, double U from the Dub S-C”

“Memphis nigga on the creep
A to the L to the K-A-P-O-N-E
Skaface Al represent the south til the E-N-D
Taking this shit coast to coast like Scottie P or Afernee
Worldwide, ain’t no limit like Master P
Straight outta Alcatraz, dope nothing but the pure uncut
Get a dose, listen close, can you cope? Nigga what!”

Others might appreciate the macabre sounds of The Graveyard Shift, a dope group signed to Mo Thugs that never dropped an album. Even Oklahoma is represented nicely as 918 paid tribute to E-40 by sampling “Rapper’s Ball” and dropping funky verses on “Paystyle.”

CD One is dope as hell, but there’s 15 more tracks left on this compilation. The second disk actually features more players from the south. Memphis native Tela gives us “Dis Year” which sounds very similar to his hit “Sho Nuff,” but is still dope. UGK drops what might be the dopest cut on the collection with “Hiside” where they explain the term:

“Stankin bitches say I hiside
Cause I pass by
Don’t smoke my fuckin weed wit em
Don’t let em sit on my plush crush
Three times gold, I’m a pimp ass nigga
So like a ball is how I roll
And I don’t be paradin with them bitches in the street
Ho is you payin me?
Well if not ain’t no need in you thinkin that you gon stay wit me
Bitch I’m a pimp cause that’s the way you bitches force me to be
You say you broke well bitch you need to stop fucking for free
So when I ride by, I don’t give the ho the time
Lil’ girl you fine, but you must done lost yo mind
Thinkin you got game
Well bitch game is my middle name
Suckin on thangs, fuckin for fame
But bitch you plain Jane
Straight up and down
I hate silly hoes that talk a lot and try to clown
When she know that I know that she done fucked the whole town
And that I know that she a freak
Bitches say we hiside cause we pass and don’t speak”

8Ball and MJG drop a good effort on “Niggas Talk Shit” and Master P and Silkk bring that raw feel to “After Dollars No Cents.” It’s actually impressive to see E-40 getting down with the colonel Master P who would take over the rap world the same year. Three 6 Mafia also gets some time to shine with “Threesixafix,” a classic Mafia track from their pre-Relativity days. Though all those names are very well known today, at the time they remained mainly a southern phenomenon.

So there you have it, over 54 rappers combining for a near perfect double album. A few weaker tracks prevent this compilation from being flawless, but it remains strong despite the countless rappers involved. Sensing this double album was their chance to shine, most rappers came with their A+ game. For someone looking for bang for their buck, you couldn’t beat the quantity, quality, and variety on this album. Even 11 years later this compilation is still worth the price of admission. Perhaps mere coincidence or possibly a testament to the cousins’ scouting talent, you’ll find that the bulk of the contributors are still dropping albums and still relevant in the game.