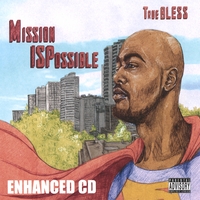 Maryland MC TrueBless wins the award for least promising album cover of the year. From its groan-inducing title to the drawing of TrueBless wearing a cape, “Mission IsPossible” lacks what the design world calls “quality cues.” Luckily, the music is much better than the album cover would suggest. The album sounds good, and even includes a lot of extras like photos and lyric documents on the disc. This is something more independent artists should do. It saves money in printing costs, and gives the consumer some additional value, allowing them to connect more with the artist and the music.

ScholarMan handles most of the production, and does an admirable job. The pronounced snare snaps had me thinking of DJ Premier, and somber soul reminded me of classic East Coast artists like Nas and Mobb Deep. Highlights include “Hot Trax,” which mixes chopped vocal samples with bombastic drums; “Melodic Wings,” which has a melodic, jazzy vocal sample; and “I’m So Thankful,” which has a mournful sped-up soul hook that was almost like a leftover track from J Dilla’s “Donuts.” The only real dog on here is “Sound the Same,” which was produced by Low Key Productions and sounds like the generic, pointless hip-hop that the song is criticizing.

TrueBless proves himself to be a capable MC, clearly drawing inspiration from East Coast MCs like Rakim and Jay-Z, and Midwestern rappers like Common and Kanye. However, where a lot of rappers rhyme about the struggles of the street, TrueBless raps about the much more personal struggles of being a father, losing a parent, and getting divorced. The album starts with TrueBless making his statement of purpose, declaring “Anyone who has ever existed was sent here on a mission. Now I must admit, I still don’t know what mine is, but I’m seeking the vision. I’m ready to face whatever to make things right again, and it doesn’t matter if I fail as long as I try.”

The overwhelming, raw sincerity all over the album acts as both a strength and a weakness. It is a strength because it imbues the music with a level of intensity and meaning that goes deeper than what a lot of MCs are offering. “I’m So Thankful” is a letter to his deceased mother describing her death and how her passing has affected him. It is a powerful song that gives us an almost uncomfortable level of insight into TrueBless’s life and feelings:

“Your death brought so much pain into my little world
I can’t look at pictures of when you were sick
So I stare at the photos of you as a little girl
Tripping off how much my daughters have your eyes
You know it’s still hard for me to envision you perishing
Though they say sometimes we lose the good things in life in order to cherish them
I refuse to go to your grave and weep
You’re not there
You live through me
My seeds, my deeds
Love eternally”

This intense emotional sincerity can also be a weakness. TrueBless hits that switch over and over again, and sometimes it is too much. At the end of the emotional “Pray For Me,” he is literally in tears, declaring “My sons hear me crying at the end of this track. Real men cry! I’m about to lose everything but my mission is still possible. I’m a man standing before you crying, hurtin’!” It is as uncomfortable to listen to as if you were watching the guy cry right in front of you.

Maybe it is unfair to criticize a rapper for keeping it too real. Isn’t it better to have artists rapping about real human experiences rather than floss about material possessions, or brag about being a criminal? I think it is, but the fact remains that I wasn’t as into “Mission IsPossible” as I wanted to be. I think if TrueBless had added a little more levity to the mix, it would have made his more intense moments easier to appreciate, and given the listener some more musical and emotional variety. As it stands, “Mission IsPossible” is still a solid album by an MC who is clearly keeping hip-hop real and true to its roots.