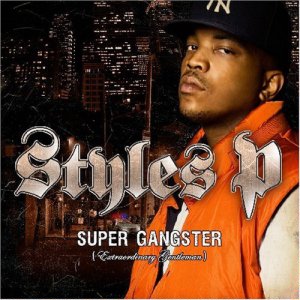 On his first solo album “A Gangster and a Gentleman” five years ago Styles P was the least likely member of The LOX to make it on his own. Even though Styles had some good beats and a crossover hit single that advocated getting high, he seemed lyrically lost without Jadakiss and Sheek Louch providing two-thirds of the songs he was on. Time makes all the difference in the world and after earning my respect on the oft-delayed release “Time Is Money” I had to admit SP the Ghost was capable of holding down tracks all by himself. 2007’s “Super Gangster” is no exception, with tracks like “All I Know Is Pain” showing that a man once known as a generic New York gun-toting rapper is now an established soloist.

“Hawk some back, they wanna sue me for my math
Hard bein a gangsta rapper, you don’t know the half
You ain’t got to condone it but you was never homeless
And you ain’t never fast, so you don’t know the wrath
To takin a long walk, down the wrong path
All I know is pain – everything I did wrong
I did it in vain, that’s why I’m tryin to change
Live for my seeds but the game ain’t change
Only the strong survive, I will maintain”

While P has improved to the point he can make anthemic songs like “I’m Black” which speak to a broader truth about life, at this point in his career his lyrical growth seems to have peaked. The rhyme patterns and flow control aren’t nearly as simplistic as they were a half decade ago, but the format of his rap tales now seems set in concrete. Listening to “Super Gangster” you notice the broad pattern where songs all come from his first person point of view – I live in the hood, I deal with these situations, I made my way up from poverty through these struggles, I’m telling you about what I’ve done and what I do. “Got My Eyes On You” featuring and produced by Akon is an ideal example:

“Can’t be humble – e’rybody bougie and industry
But me, I’m in the conrete jungle
Where rap about your cash’ll get your mouth bloodied up
Run in your house, real late, you and your wife buddied up
Can’t afford to rap about no cars with no 24’s
Shorties on my block is real, hard with they 44’s
I know some teenagers, that’ll strip you like a female
Take your jewels off, when you get your car detailed
Sell it half price, like they got it on retail
Put you on the ocean floor, right by the seashells
They all got the look, like they’d ride on you
Take it easy young boys I got my eyes on you”

Sometimes it seems like Styles tries to shift the focus on tracks like “Green Piece of Paper” but invariably no matter how much “we” or “us” he puts in the rap it comes back to him in the end: “I can see my demon in the cup full of liquor.” Okay Styles, put the cup down. On “Star of the State” P states where he’s from for the hundredth time: “From a hood where niggaz is miserable/they either gon’ dead you or leave you in critical.” If this sounds familiar it should – he’s stated how hard Yonkers, New York is a hundred plus one times. When he busts a flow on the Hi-Tek produced “Let’s Go” he’s not asking you to ball out with him for a good time – he’s talking about the good time HE is having and the girls HE wants to leave the club with him. Unfortunately this song also features once of the worst witticisms he’s spit in song in a long time: “I ain’t talkin ’bout coffee, but I’m gettin them Starbucks.” Har har har! One might hope “Alone in the Street” would be an epic Vinny Idol produced song about the poor and homeless but once-again it’s a self-centered narrative about how HE is alone at “1, 2, 3, 4, 5 o’clock in the morning, you know I’m tryin to see more – all day, all night, all by myself.”

I can’t knock Styles P too much for his attitude. If he hadn’t developed a keener sense of self-importance he wouldn’t have the confidence to succeed as a soloist. Even at the times he seems to be searching for a statement to make though the “I” always finds its way back into the dialogue, such as on “Cause I’m Black” with Black Thought. Unfortunately this pairing tends to show up Styles because even when Thought gets egotistical he does it on a grander level: “Give me the peace prize like Al Gore’s/I got a mind like Malcolm X, how ’bout yours?” Once Styles raps about Malcolm and Martin in the third verse, he seems to be jumping on the bandwagon late. There’s plenty to like on “Super Gangster (Extraordinary Gentleman)” such as the bouncy “Holiday” with Max B and nostalgia throwback tracks like the Kid Capri produced “Da 80’s” but one can’t help but notice Styles’ focus on me, myself and I. To hear Styles P tell it on “Super Gangster (Extraordinary Gentleman)” he has just one goal this time around – he wants to “Blow Your Mind.” The lyrics paint a different picture.

“The black hippie, the sack with me, the lighter too
I have dreams of Amsterdam every night or two (Amsterdam)
I feel good, the sky couldn’t be a brighter blue
Sun lookin like a tangerine
You got green and it’s mean, brother hit me like a tambourine
I need a minute to myself, second to myself
Pass the dutchie on the left, whoever’s suckin on the L
I’ma need candy cause I know my breath is gon’ smell
I don’t get sleep but some good restin off a L
Mind blown, time fly, time gone
Missed my exit on the highway, I ride on
Roll another one, get in my good time zone”

Funny thing is the only person that seems to be getting smoked out here is Styles. There’s no doubt Styles P is a “Super Gangster” but he may have unintentionally become super formulaic and super self-absorbed in the process. Styles has all the tools to suceed but what he really needs is something new to say beyond “I smoke this weed, I make this money, and I live this life.”