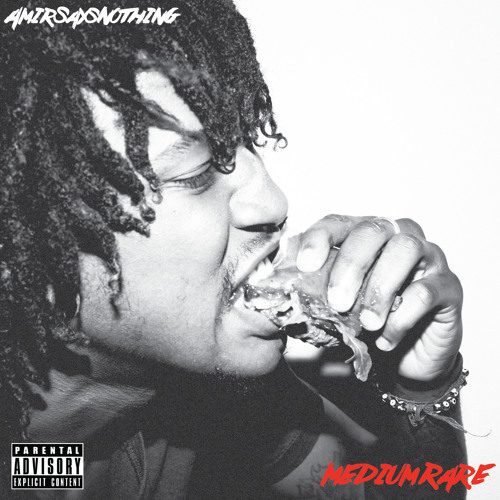 This is going to be another one of those cases of my age showing, but when I checked out AmirSaysNothing’s “Medium Rare” EP, the first and I mean VERY FIRST thing I noticed was that he unapologetically jacked L.L. Cool J’s hit single “Doin’ It” featuring LeShaun for his titular song. Now this wasn’t presented to me as a mixtape, and if that’s what it is then by all means, get your swerve on to a classic L.L. track which was as close as pop rap could get to softcore porn without being kicked off FM radio. However that doesn’t stop me from hearing the words “I’m representing Queens, she was raised out in Brooklyn” over and over again in the back of my head throughout the entire song. Either way I’m not sure that SUR CHEVVIE should take a “producer” credit for it.

This made me cast a skeptical eye on the rest of the “Medium Rare” EP as to what sort of originality it would have, but there are some appealing parts of Amir’s presentation I give high marks to. This is where me being a college age kid in the 1990’s actually benefits Amir as opposed to detracting from his score – he’s got a style and flow that is highly and in fact UNCANNILY similar to The Pharcyde. You could say he’s a perfect cross between a pre-cracked out Fatlip and either Imani or Bootie Brown. It’s not surprising to me when I pull up his bio and find out that he hails from Los Angeles, because clearly he draws influence from the free from creativity of peers such as the masters of the dozens as well as modern day millenials like Odd Future. “No need to write rhymes a certain type of way/my stylistics, you see depend on the time of day/learnin that these vermin ain’t worth workin for/I used to be Dunkin’ Donuts like my name was Okafor.” I can dig it.

The self-described “multi-faceted individual” Amir is almost too busy to be a rapper as he describes himself as having no less than four jobs, listing being a pastor as one of the many. If he is then he’s like no other pastor you’ve ever heard before, as his version of getting Biblical is “Judas can’t get his bulls%@% past my naked eye.” Back to the music though, one of the best tracks on “Medium Rare” is the Liquid Galaxy & Mina Knock produced “Never Had a Problem,” which also features a cameo by Knock. It’s a playfully boastful track which has Knock dropping memorable lines like “Got you bitch-ass haters shaking in your longjogns,” showing that the charismatic duo could be a regular tag team instead of a one-off collaboration on this short release.

Despite my reservations about blatantly jacking James Todd Smith and acting like it’s brand new, “Medium Rare” wins me over thanks to Amir’s youthful exuberance and his ability to portray cinematic scenarios on songs like the ominously narrated “Stick Up.” He arrives virtually out of nowhere with a pleasing style and flow that I’m looking forward to, so be honest with the beats and there’s no reason not to expect more interesting musical excursions in Amir’s future.