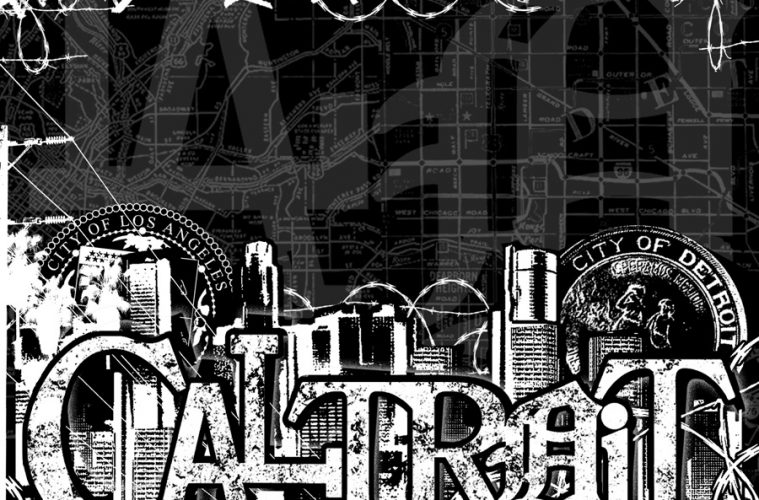 Black Milk is becoming a goto guy in the crowded arena of hip-hop producers and I could not be happier about it. Anyone who knows me know that I am a huge fan of his body of work and 2008 promises to be a good one for people who love what Black Milk brings to the table.

The Caltroit project would be the outcome of a chance meeting between Black Milk and Bishop Lamont, a rapper from Carson, California signed to Dr. Dre’s Aftermath Records on a video shoot for Slum Village. Black Milk gave Bishop one of his cds without knowing that Bishop was signed to Aftermath. Later, the two would continue contact with each other, exclaiming a mutual appreciation for the type of music that the artist, and their respective regions Detroit and Southern California, were creating. They decided to do a collaborative effort between California and Detroit hip-hop artists and the project took on a life from there.

I had initially downloaded the Caltroit mixtape that was hosted by D.J. Warrior of Left Coast fame. However, I found it difficult to listen to because D.J. Warrior established a STRONG PRESENCE (as DJs tend to do) all over the mixtape and it was hard to concentrate on the music when you have someone shouting all over it. In addition to that, I had read that there would be a mastered version of the mixtape available in January, so I waited before I would give the music a formal review â€“ I am glad that I did.

There are a few things that I feel need to be clarified before I speak upon the music on the Caltroit album. First, Black Milk does not produce every track nor does Bishop Lamont appear on every song. Secondly, the mixtape contained both Bishop Lamont and Black Milk’s name, however due to legal issues with Aftermath, Bishop Lamont’s name had to be removed from Caltroit’s commercial release â€“ but it is the same mixtape/album. None of this is bad news because the additional artist and producers that show up on Caltroit bring their top game to the table. Jake One, Focus (an Aftermath staff producer who is really getting my attention, Oh No, DJ Khalil and Mr. Porter all have tracks on Caltroit and any record that puts Ras Kass, Royce Da 5’9 and Black Milk together holds so much promise â€“ trust me when I tell you that “Go Hard” delivers. You also have Kardinal Offishall, Busta Rhymes, Diverse, Stat Quo, T3, Illa J (Dilla’s younger brother), Planet Asia, Trek Life and MISTER FAB showing up and SHOWING UP (the opposite of merely phoning it in).

Okay, let me just make this short and sweet: Caltroit BANGS! The production style of Black Milk and his Left Coast contemporaries fits tight like some sexy ass Legos. A shared appreciation for hard driving drums, deep musicality and badass lyricism makes Caltroit that album you need to be playing when you are behind the wheel and need some music to put you in that killer state of mind…naw don’t listen if you have a predilection for road rage. Let me count the ways.

If you have not heard it already, the single “Caltroit” is Black Milk channeling the Dre sound that is going to get mess around and get him signed to Aftermath if he is not careful. Bishop Lamont accords himself well. With his street narratives, punchlines and social/political commentary, he reminds me of Saigon a great deal. I mean this in a very positive way. Dre made a good choice signing Bishop and I hope his album “The Reformation” sees the light of day.

Everything after “Caltroit” will keep your head nodding, but Focus’s board work turns in what I feel is one of the highlights of the album with the song “Bad Girl”. In this song, Bishop explores the same territory as The Game’s “Wouldn’t Get Far” concerning women who would like to use artist as a means to a better life or entering the entertainment industry themselves. It is not quite as misogynistic as Game’s rendition and actually starts out with well intentions.

The Ras Kass/Royce/Black Milk team up on “Go Hard” makes me excited about the purported news that they will be doing an entire album together. If we can get an EP’s worth of material from this team, it will be worth it.

The song “Not the Way” features Bishop performing in the manner that brings Saigon to mind. Bishop addresses the Iraq conflict with harsh words and a weary heart as he expresses his sympathy for the soldiers and families who are suffering because of the conflict. He also raises issues about why there seems to be so much money to fund an unending conflict with dubious intent, but New Orleans and poor enclaves across the country are left to rot.

One of the hottest tracks for Caltroit did not make the album because of legal issues. It was a track that appeared on the mixtape that featured Ms. Jade, Peeps and Lady of Rage (yes, that Lady of Rage). The music was produced by the Madlib’s younger sibling Oh No and is sorely missed on the album as the women emcees bring in worthy performances and Oh No quite simply murdered the boards on that one.

I do not want to say anything else. Look – go over to Fat Beats webpage and check it out. Just do it!