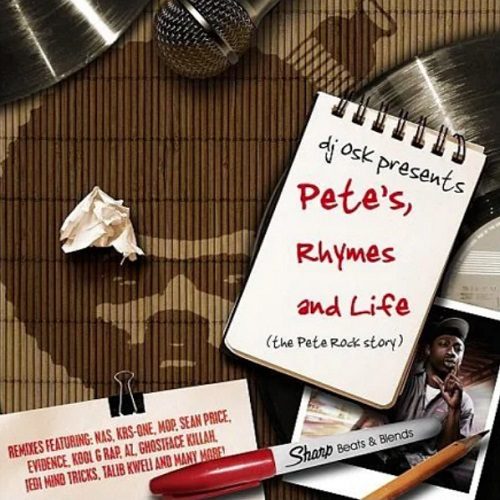 According to the website RapMullet.com, DJ Osk is “the best over-seas mixtape DJ that you’re sleepin’ on.” To their credit, DJ Osk is skilled at what he does but your regard of the Swiss DJ will depend on how you feel about blends. Blends are those tracks that you will occasionally find on mixtapes that feature the vocals of one track placed over the instrumental of another track. Most people don’t particularly care for blends and there is good reason for that. While I appreciate the technical skill required to put together a blend, musically blends almost never equal or surpass the original songs. Basically, there is a reason we like the original songs and it usually has to do with how the vocals sound over that particular beat. When you start mixing those things up the music is bound to lose a big part of the original appeal. What we have here is conceptual blend tape dedicated to Pete Rock.

Though billed as “The Pete Rock story” this hour long mix isn’t a true reflection of Pete Rock’s career. Pete Rock is a producer mainly and this does feature his production, but Pete Rock’s career is just as much about who he chose to produce for and you can’t tell the Pete Rock story without CL Smooth. Aside from that “small” omission, “Pete’s, Rhymes and Life” will likely appeal to long time Pete Rock fans. DJ Osk packs this mixtape with a heavy line up of underground rappers both past and present. Did you ever want to hear Jedi Mind Tricks over Pete Rock production? It happens here. What about Big Pun, Evidence, Saigon, and Little Brother? DJ Osk gives us those emcees over Pete Rock production too. There’s a few highlights in the mix with my favorite being The Beatnuts and Big Pun’s “Off The Books” dropped over “T.R.O.Y.” I would have preferred a more substantial Big Pun verse/song being used here, but I appreciate what the man was going for here. There are also a few wack tracks that miss the mark entirely. “Run” featuring Ghostface Killah and Jadakiss is remade and sounds horrible as the music doesn’t have the energy to keep up with the vocals.

Overall, I can’t say much either way about DJ Osk’s latest endeavor. I really don’t consider this a true reflection of Pete Rock’s career since you really can’t look at his work with CL Smooth strictly from the production point of view. Osk also largely ignores Pete Rock’s latest production, including some of the excellent work he’s done for Jim Jones. On top of that, listening to classic Pete Rock and CL Smooth beats made me want to go back and listen to the original song. The same could be said about tracks like “Heavy Metal Kings,” “Run,” and “Mr. Slow Flow.” The beat Osk put under those tracks was decent but I would have much rather heard the original track. I’m not knocking Osk’s skill behind the wheels, he is a master of blends in the technical sense. The issue is that ultimately these blends, along with 99% of those ever released, don’t even come close to capturing the excellence of the original tracks. Taken as a conceptual mixtape “Pete’s, Rhymes and Life” is good for a few listens, but don’t expect it to stay in your rotation for a long time or replace any of the original tracks that comprise it.