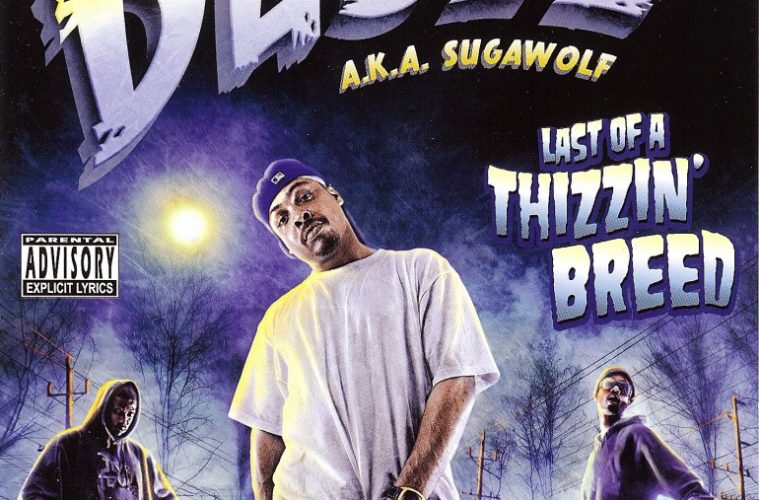 Dubee :: Last of a Thizzin’ Breed

Dubee’s latest CD has easily been the CD I have been anticipating the most during the last year and a half. I preordered this baby way back in October of 2006 and kept my backorder open despite months and months of delays. My anticipation of this CD had nothing to do with Dubee as a rapper. The Thizz Entertainment rapper has been down with Mac Dre for well over a decade, dropping pimpish albums that have been praised by many a Bay area rap fan. Despite his strong resume, I’ve never bothered to pick up any of his solos. I finally bought a Dubee album due to the cover art. Being a product of dirty south gangsta rap, I’ve grown to love the Pen & Pixel style art that dominated the 1990s. I still remember the smile on my face when I first saw Kilo’s “Too Cold To Be A Hot Boy” cover art, to get the point across Kilo has a leash with a polar bear on the end â€“ now that’s COLD! “Last of a Thizzin’ Breed” is the latest in my collection of outrageous and dope cover art as it combines two of my loves â€“ rap and zombie flicks. Dubee stands in the night amongst a slew of zombies to signify he’s the last rapper who hasn’t succumbed to the “virus.”

As is the case with most crazy cover art, the concept starts and ends at the cover. We don’t get an explanation for why Dubee feels he’s the “Last of a Thizzin’ Breed.” We don’t even get a title track. Instead we’re served with 22 tracks and skits that maintain the disappointingly solid consistency you’ve come to expect from a Thizz Ent. Release. Long time Bay area fans have long ago come to terms with the fact that hyphy has done much more harm to the Bay than people are willing to admit. Don’t get me wrong, for all of five minutes hyphy and E-40’s last album sure seemed to put the Bay back on the rap map. Since that time all we’ve gotten is sub par and cookie cutter hyphy music and no exposure (Fabby Davis, where’s the official album at?). What we’ve lost is that rich funky sound that put the Bay (and rappers like Dubee) on the map in the first place.

The average and uneventful production on this album is acknowledged by the fact that we get no production credits on here. The emceeing is average, except for the fact that all of Mac Dre’s students learned a little about style and energy when it comes to spitting. Dubee is no different as he has a distinct voice and slightly pimpish flow (imagine a toned down Suga Free). The songs themselves are enjoyable enough depending on how critical you are when it comes to run of the mill gangsta rap. The PSD assisted “I’m A Gangsta” is my favorite cut due mostly to the funky bassline that takes things back to the early Bay music. The smooth hook also helps the cause, though Dubee’s lines are nothing spectacular. Hyphy Thizz anthems dominate the album and are good depending on your tolerance level. “Thizz For Life” is a decent declaration of Dubee’s allegiance, but by the time we get to “Thizz I Iz,” “Thizz Dancin’,” “What Thizz It?,” “Thizz How We Eat,” and “Throw My T’z Up” the theme starts to wear thin. It’s even worse when you realize songs with similar or exact titles have been released before on all the Thizz compilations that come out on a weekly basis.

As has been the case with most Thizz projects post Mac Dre, “Last of a Thizzin’ Breed” is suited for hardcore fans. Personally, I’ve reduced my consumption of Thizz albums to about one every 3-4 months so I can appreciate Dubee a bit more than the average fan. I can’t fathom how some fans cop every Thizz release and don’t get absolutely tired of the same old thing, but if that’s your thing more power to you. For the cover art collector, this CD, along with a few other Thizz releases, would definitely be a worthy addition for your collection. For hardcore hyphy and Dubee fans, this CD doesn’t offend. If you’re new to this whole Bay area thing, I’d suggest you take a trip 10-15 years into the past and check out the early work of guys like Mac Dre, Messy Marv, R.B.L. Posse and even Dubee to get a better feel of what the Bay is all about.