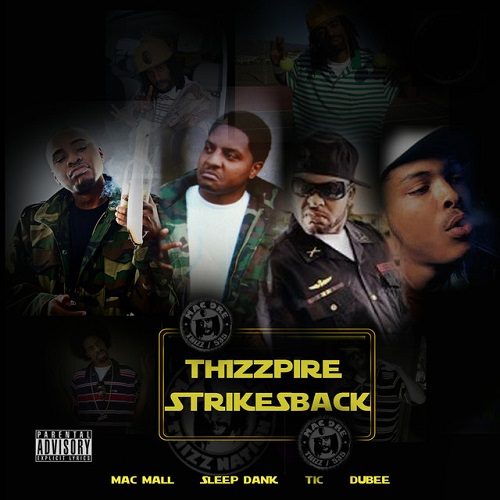 At first glance this project’s title looks like another more or less evident pun on the term ‘thizz,’ as popularized by the late Mac Dre and spread further by his disciples, but after some research it reveals a meaning that was at first hidden to a casual consumer like myself. As the Vallejo Times Herald reported in late April 2012, law enforcement arrested 25 people suspected to belong to a drug trafficking ring, including, as the newsportal rather maliciously put it, ‘many of them Vallejo-based rappers […] tied to Mac Dre.’ According to the U.S. Justice Department release cited, ‘the investigation uncovered a network of drug distributors centered in Vallejo’s Country Club Crest neighborhood in north Vallejo.’

The authorities associated several of the suspects with Thizz Entertainment, the label best known for fervently administering the artistic legacy of Andre ‘Mac Dre’ Hicks. Thizz Entertainment, owned in part by Mac Dre’s mother, pointed out that the targeted enterprise was actually Thizz Nation, a label with ‘no ties whatsoever’ to Thizz Entertainment. A spokesperson said: ‘You have involved a continual grieving family, innocent company and reputation as part of an investigation of criminal, illicit and illegal acts and elements that are untrue and unfounded as it relates to Thizz Entertainment. You have also named Andre Hicks aka Mac Dre as ‘at the core’ of this drug trafficking ring even though it is common knowledge that he has been deceased for eight years now.’ The investigators had gone as far as tracing Thizz back to the Romper Room Gang, who made headlines in the late ’80s and early ’90s with first sticking up pizza parlors and later graduating to robbing banks. The Romper Room affiliation had already successfully been stuck to Mac Dre himself, who in 1992 was convicted to five years in prison for conspiracy to commit robbery. The whole story was even told in an episode of BET’s ‘American Gangster’ with testimony from Romp members and rap artists J-Diggs and Coolio Da’ Unda’ Dogg.

And now this. Although the circumstances of the Mac Dre case back in the day were suspect and although it is highly unprofessional when authorities confuse companies when making such severe allegations, it would be hypocritical of me to act surprised. As a rap fan you cannot expect street rappers to tell realistic tales of how they have engaged in all types of criminal offenses and at the same time assume they switch to a completely legit lifestyle the very moment they record their first rhyme. Of course, ideally that’s how it should go. Street rappers look back at a criminal past and draw inspiration from it, but they don’t go back to it. That’s the theory. But you have guys out there who have been telling the same tales for twenty years but haven’t seen a fraction of that Jay-Z money, so they’re probably not simply spinning yarn. It’s common knowledge that a number of rap careers have been financed with drug money (and not just as seed funding), a fact reflected in countless rap lyrics. Some have been able to make a clean-cut transition from illegal to legal, while others are still struggling slash hustling artists.

Among those arrested a year ago were longtime Bay Area representatives Little Bruce, one-time recording artist with E-40’s Sick Wid’ It, and Dubee, once signed to the same label as Mac Dre, Young Black Brotha. Now I don’t know if “Thizzpire Strikes Back” was recorded before or after last year’s incident and whether it trades under Thizz Nation or Thizz Entertainment, but its title certainly takes on the meaning that ‘Thizz’ is back up on its feet and ready to retaliate, at least verbally, very much in the vein of Mac Dre’s 1992 album from jail, “Back N Da Hood.” Strictly going by the music, though, it’s more likely that this is a previously recorded project whose release has been delayed. The liner notes even apologize to ‘the producers we didn’t mention in the credits, it was hard enough piecing this CD together […] due to FBI investigations.’ For whatever reason, no label is listed on the release, only distributor City Hall.

What “Thizzpire Strikes Back” does confirm is that Vallejo’s Crestside is an incredibly tightly knit community, a seemingly self-sufficient corner of the world with a tradition as rich as any infamous North-American neighborhood that rap helped make famous. When Mac Mall quips, “Bitch, I ain’t from Vallejo, I’m from the Crest,” you know you’re dealing with a form of extremely local pride here. Elsewhere he taunts, “[Vallejo] Times say my neighborhood no good, I disagree / I guess the Valley mad because they can’t be Cud-dy.” ‘Cuddy’ (or ‘cutty’) referring to comrades in the hustle, the term being another property exclusive to the Crest. And so “Thizzpire Strikes Back” is mainly another manifestation of Crestside cuddy rap, following similar coalitions like Three Cee’s, Cutthoat Committee and Crest Creepaz and continuing the tradition of rap records originating in the Country Club Crest, home of the Mac dynasty – The Mac, Mac Dre and Mac Mall – and one of those small places whose significance has been magnified by an unusual number of rap representatives.

“Thizzpire Strikes Back” continues the legend with a number of tracks that range from feisty (“Last Real Niggas Alive”) to festive (“Five Tre Five”), sometimes covering both (“Good in the Hood”). “Country Club Crest” may build on a classical sample, but Sleep Dank keeps it strictly hood:

“I went from breakdancin’ to baseball to breakin’ down rocks
Crestside of Vallejo, one way in, one way out
Back when A.D. was battlin’ Too $hort
Niggas wore silk shirts and smoked hubba rocks in they Newports
Niggas trickin’ blow at Figaro’s
Remember Anna? She’ll suck a dick, boy, make you bend your toes
I would hit the candy lady store for $2 joints
In the Crestside, boy, you didn’t have no choice
Riots and melees, the ambulance comin’ a day late
The poverty level so under the pay rate
A felon like the O.G. Pay Pay
And I still got hands like Rick Petty in his heyday”

Who is Rick Petty? I don’t know. Maybe that’s not his name. Maybe it’s Rip Penny. I don’t remember Anna either. It’s no surprise that Google doesn’t turn up conclusive results because cuddy’s keep it local than a mofo.

At 18 tracks, not everything can be explicitly Crest-related. Offerings like the snappy “Disco Stunna,” the lush “Chillaxing,” the stuntastic “Ovadose of Fly Shit” or the airy “I Ain’t Got 2 Lie” have enough thump and swag to resonate anywhere in clubland. Overall the sound quality is a notch below industry standards, but the anonymous producers regularly prove that the Bay still has the hang of synth production like few other places. They even display historical awareness with the Slick Rick-inspired “The Whole Crew.” But by the same token the beats don’t break new ground and a track like “Lifes a Motion Picture” features the type of old fashioned musical arrangement that these days only sounds fresh on a E-40 record. The tolerance levels for inanely repetitive (musical and lyrical) patterns are reached a few times, for instance with “Do This Here,” “Stop Baby Pop” and “D-Boy Spit,” while the closing “Turf Dirt Tramp” raises the question why rappers would want to publicly badmouth girls who may literally live next door.

Nevertheless the quartet gives a competent and convincing performance. The husky grandfather flow of Dubee, the moody but razor-sharp delivery of Mac Mall, the West Coast wordsmithery of Sleep Dank and the blunted antics of Treacherous Tic combine for a mural that’s hard to decipher for out-of-towners but could still be worth the trip. Though those who try to translate it won’t help but notice the incriminating content.