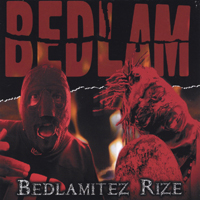 Every year, my family has a reunion in Northern Michigan, and normally, on our way back from these reunions, we stop in Saginaw, Michigan. My parents like the town a lot; it’s got some nice little boutiques, a ferry, and a couple of music stores. It’s basically designed for the middle-aged ex-hipster set. This is where my parents want to retire to, and I think that they fantasize about that every time we visit. Mostly, my brothers and I just wanted to get the Hell outta there before we died of boredom.

Now, I personally have a whole new reason to feel that way: Saginaw’s own horrorcore Hip-Hop duo, Bedlam. Not necessarily because songs like “Check Tha Children” or “In Love With the Dead” frighten me, but mainly because I might accidentally see that there’s a record store somewhere that may have sold out of their music, thus implying that there’s a very disturbed person with their hands on some of the worst Hip-Hop music I’ve ever heardâ€¦and probably has some of the songs committed to memory.

Personally, after reading the scathing review that this site had posted of the duo’s last CD, “Shock Treatment,” I’m surprised that they even bothered to send in another CD for a review. But what else can you expect from the duo that brought you hits like “Abduct, Murder, Rape, Kill” and its accompanying remix? (By the way, I’m pretty sure that “murder” and “kill” are synonyms. However, with a group who makes songs like “Feel â€˜Em From the Grave,” I wouldn’t expect any moments of literary genius.)

This time, they’ve brought guests along for the ride: horrorcore rap vets Esham and Mastamind, but they don’t fare much better. Then again, have these guys ever really done anything of note next to getting a bunch of fucked-up kids to chant along to really silly, simplistic lyrics. In the last review of their album, Jordan Selbo noted that he’d pretty much tell anyone who wasn’t a “tween goth” to steer clear of this album. I actually even advise the young hellion set to stay away from these guys as well, as I’m confident that even those type of kids would see this duo as childish and juvenile. I don’t necessarily understand if the “sophomore jinx” applies here, but this album definitely sucks. And it’s a guarantee that I’m gonna find something else to do on family vacations besides travel through Saginaw on the way home.