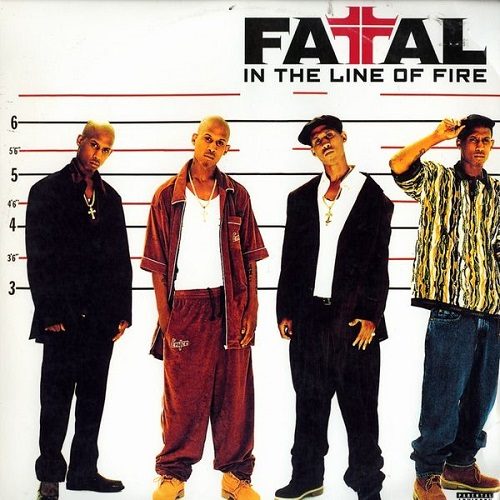 Fatal :: In the Line of Fire

A decade ago the Outlawz seemed poised to rise from the ashes of Tupac Shakur’s untimely demise. At the time I was looking forward to their ascendance due to previous performances from Fatal and Young Noble on ‘Pac albums like “All Eyez On Me” and “The Don Killuminati” respectively. Unfortunately that dream started to crumble almost immediately when the group’s members couldn’t agree on whether or not to continue working with Death Row Records. As a result when the posthumous 2Pac/Outlawz album “Still I Rise” was released any existing verses by Fatal had been edited out of every track. Wikipedia claims as of the writing of this review that this was done “for undisclosed reasons” but it’s not hard to figure out why given that Fatal released his first solo album in 1998 while “Still I Rise” didn’t hit stores for another year. Either Death Row or the Outlawz didn’t want Fatal to profit from the album when he was no longer down with the group – possibly both.

Last week I successfully mined another gem from the bargain bin when I scored Fatal’s “In the Line of Fire” for just $2 plus tax. At long last I have the chance to see if it was worthwhile for Fatal to break camp and strike out on his own. Until now the only song from the entire album I’ve been intimately familiar with is “Getto Star,” and that had as much to do with Tame One rapping a duet with Fatal on the single as anything else – I was Tame’s webmaster for a couple of years. (You can still find the website I launched back then at Tame-One.com under new management.) The Reefologist produced single was a hit with me, as I thought the two New Jersey natives made an excellent lyrical combo over hardcore hip-hop pianos.

Tame: “Wait’ll niggaz hear that Tame and Fatal got down and made it straight
from Uptown with six sacks and this track that’s in the background
Stop stressin from the chest up, we messed up
off that best stuff that fits up in yo’ Dutch
Situation like this, you get blown to bits
Fuckin with this Brick lyricist, more complex than the Pyramids
Here it is, Strictly Biz like small print
In between them bong hits, we drop the strong shit
Chickenheads say, “Who him?” with fucked up Timb’s
Knotty fro and baggy denims, spendin up the Benjamins
in city tenaments, the Boom Skwadron odd man
Don’t give a fuck like Rodman”

Fatal: “Lyrics verbally toxic, spit like doubled edged optics
My shit is milk, wearin silk shirts with chocolates
Y’all broke and can’t cop shit, I get, physically fit
on some evil eye ready to die shit
This thug shit, niggaz get beat down and shot up
I saw this one nigga, get stolen on and your soul got up
Stolen car, roll past the bar, toured a lot of city
Gave him an eighth and he cooked his whole product
It’s a shame how you cowards change the game for narcotic
You don’t get it, don’t got it, the love of money get exotic
If you old you get shot at, and can’t walk the streets
without gettin your lil’ money hungry soft ass spot”

Fatal embraced a bi-coastally broad range of hip-hop that was unusual for the time, especially given the tensions fueled by the deaths of both Tupac Shakur and Christopher Wallace. On the D’Anthony Johnson produced “M.O.B.” East coast legend Freddie Foxxx provides the opening verse and roughneck braggadocio: “The company I keep, be the scum of the earth/body tatted, hair matted, selling ki’s.” Meanwhile on the Baby Paul produced (and perhaps ironically titled) “Outlaws” Fatal raps with Bay Area legend Mac Mall.

Mall: “I take this thug shit seriously, bought dirty gats with dope money
ATF can’t fuck with me
My soldiers be all dead quiet
I’m holdin my crotch, sippin Henn’ nigga, your life or your knot
Thug life my life, it don’t stop, it’s never too hot
And when I die I greet Hades with glocks
Young crazy Californians, postin ’bout six in the mornin
On a quest to take the breath of my opponent”

It’s a shame that Fatal didn’t push this concept even further by having cuts where his friends from both coasts rapped with him on the same song, but with only eleven tracks on “In the Line of Fire” there may not have been enough time or room to do more. In fact to some degree this album feels rushed and a bit lost conceptually. “Everyday” is clearly aimed at radio play with a light background guitar, a singer on the hook, and lines like “shit so hot, watch it resurrect ‘Pac.” The Reefologist produced “I Know the Rules” is aimed at old school N.W.A fans, employing the same riff heard on the MC Ren solo track “If It Ain’t Ruff,” although sadly it doesn’t have the same impact Dr. Dre gave it with extra bass and DJ cuts. Fatal seems eager to find his voice yet valuable space on this CD is given to a rapper named Dirty Bert who I’ve never heard of before and never need to hear from again. Unintentionally the solo track “Time’s Wastin'” becomes aptly named as a result – one of only four songs where Fatal is completely on his own.

“The devil don’t want me yet, so I pack tecs
Writin out mys will with a Black Caaser rep
I handle mics like Hardaway, and never get stripped
Bust ya boy shit, when he ridin on my dick
Nigga ya foulin out, hackin me with the wack rhymes
Grabbin your nine, shootin scared tryin to snatch mine
I murder niggaz like you on the humble tip”

Fatal could and should have employed this slow-flowing deadly lyrically delivery more, as it’s the same thing which set him apart from the Outlawz in the first place. After such a short and somewhat underwhelming album it seems that Fatal’s first solo has some fatal flaws. I still consider “In the Line of Fire” a gem considering how cheaply I was able to acquire it, but Fatal’s lack of cohesiveness and a generally underwhelming selection of beats makes what should have been a phoenix rising from Shakur’s ashes into more of a roman candle – a brief fizz of fireworks that quickly fades into the night sky.

Fatal :: In the Line of Fire
7Overall Score
Music7
Lyrics7